NFL News and Rumors
The Chicago Bears will look to record consecutive victories and hand the playoff hopeful St. Louis Rams a crushing loss when they square in a Week 10 clash that is offering a lot of value for mybookie.ag NFL odds gridiron gamblers looking to increase the annual betting bankroll. Now, let’s find out which team is going to bring home the bacon in this matchup.

The Rams were on the wrong end of a heartbreaking 21-18 overtime loss to Minnesota in Week 9 while failing to cover the spread as a 2-point road dog. Minnesota kicker Blair Walsh nailed a 40-yard field goal with 9:18 left in overtime to lift the Vikings to victory. The loss was all the more hurtful as Minnesota head coach Mike Zimmer opted to take the wind at his team’s back on a blustery day at TCF Bank Stadium. Minnesota’s defense forced a three-and-out on the first series and the Vikings responded by driving 29 yards in seven plays to set up the game-winner. Rams kicker Greg Zuerlein made four field goals in the loss, including a 53-yarder with 12 seconds remaining to send the game to overtime. Unfortunately, gifted rookie running back Todd Gurley was limited to 89 yards and a touchdown on 24 carries, snapping his four-game streak of topping the century plateau. “We held him to under 100 yards and that was our goal,” said Vikings defensive tackle Linval Joseph. “These are really tough to lose but we fought to the end,” Rams quarterback Nick Foles said afterward. “Greg made some outstanding kicks and we just kept fighting. Minnesota is a great team.” Rams defensive back Lamarcus Joyner gave Vikings star quarterback Teddy Bridgewater a huge cheap shot blow to the head that left his opponent briefly unconscious as Bridgewater was sliding for a first down with 8:39 left in the third quarter.

The Bears recorded a ‘uneventful’22-19 win against San Diego on Monday night as starting quarterback Jay Cutler completed 27 of 40 passes for 345 yards and two touchdowns to help the Bears cash in as a 3.5-point road dog. The Bears got the win after entering the final quarter trailing by nine points. “You have to play your best in the fourth quarter, and that’s what coach (John) Fox has talked about,” Bears quarterback Jay Cutler said. “It’s good that it happened today, but we have to continue it.” 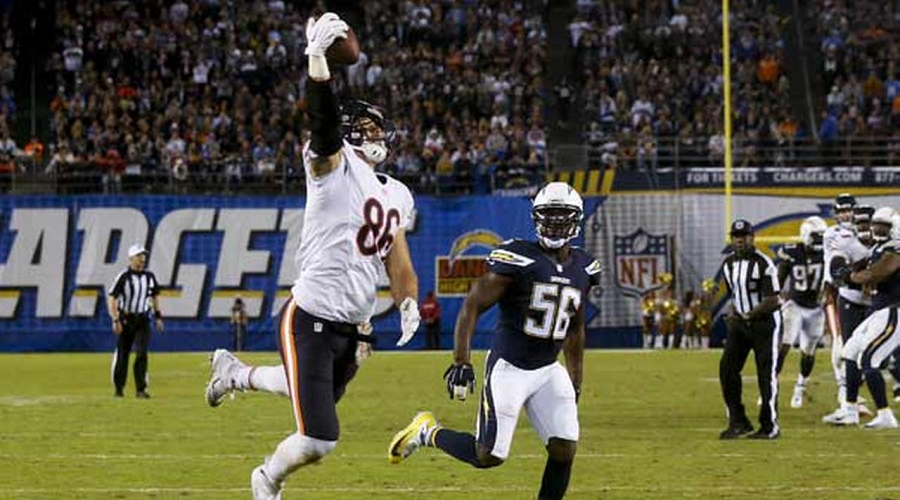 Cutler connected with tight end Zach Miller for a 25-yard touchdown with 3:19 remaining to give the Bears a lead they would not relinquish as running back Jeremy Langford added a two-point conversion run for the final margin. “Jay made a great throw, and I was able to go up and get it,” Miller said. “After that, I went unconscious. It was one of those things where instincts kind of take over. I really didn’t have time to go up with two (hands) because he put some juice on it. I went with one and thankfully pulled it down.”

The Rams are the easy pick to get the SU win at home, seeing as how they got humbled in Week 9 and have still have a lot to play for, but as far as the ATS cover is concerned, I’m going with Chicago and so are 57 percent of public bettors. The Bears have dropped two straight coming into this contest, but they’re also well-rested and desperate. I know the St. Louis Rams are 7-3 ATS in their last 10 games following a SU loss, but Chicago has gone 4-1 ATS in its last five road games and 5-2 ATS in their last seven games against the Rams. The favorite in this series is 4-1 ATS in the last five meetings, but I like Jay Cutler and company to put a dent in those numbers by bringing home the bacon as a touchdown road dog! My Pick: St. Louis 27 Chicago 24
Older post
Newer post