NFL News and Rumors
Christmas came early for the San Diego Chargers a week ago and now the Bolts will look to open up their second straight ‘present’ when they square off against the Oakland Raiders in an intriguing Week 16 matchup that gets underway on Thursday, December 24, at 8:25 PM ET, live from O.co Coliseum in Oakland, California.Now, let’s find out if the Chargers can record consecutive wins for the first time this season.

San Diego Chargers at Oakland RaidersWhen: 8:25 PM ET, Thursday, December 24, 2015Where: O.co Coliseum, Oakland, CaliforniaNFL Odds: Oakland -4.5Over/Under: 47The NFL Week 16 odds for this AFC West clash have the visiting Chargers as 4.5-point underdogs to beat the Oakland Raiders while the Over/Under for this contest sits at 47

Why Bet The San Diego Chargers Odds at +4.5

While the San Diego Chargers (4-10 SU, 6-8 ATS) beat the beleaguered Miami Dolphins 30-14 last weekend to cash in as a 1-point home favorite, there’s not very many reasons to bet the San Diego Chargers odds at +4.5.I know the Bolts have an elite quarterback in Philip Rivers and their usual boatload of talent on both sides of the ball, but San Diego is also one of the biggest bunch of underachievers in either conference.Still, the Chargers have won three of the last four meetings against the Raiders, though they were on the wrong end of a convincing 37-29 home loss against the Raiders on Oct. 25 while failing to cover the spread as a 3.5-point road dog.

Why Bet The Oakland Raiders Odds at -4.5

The Raiders (6-8 SU, 7-7 ATS) have alternated SU and ATS wins over their last five games, but got man-handled in their humbling 30-20 loss against Aaron Rodgers and Green Bay last weekend while failing to cover the spread as a 4-point home underdog.Still, betting on the Raiders in this contest is a good idea because they’re playing at home and have been better than the Chargers all season long. Oakland has a fantastic young quarterback in Derek Carr and a pair of outstanding wide receivers in gifted rookie Amari Cooper and veteran Michael Crabtree, not to mention arguably the game’s best linebacker today in young phenom Khalil Mack. 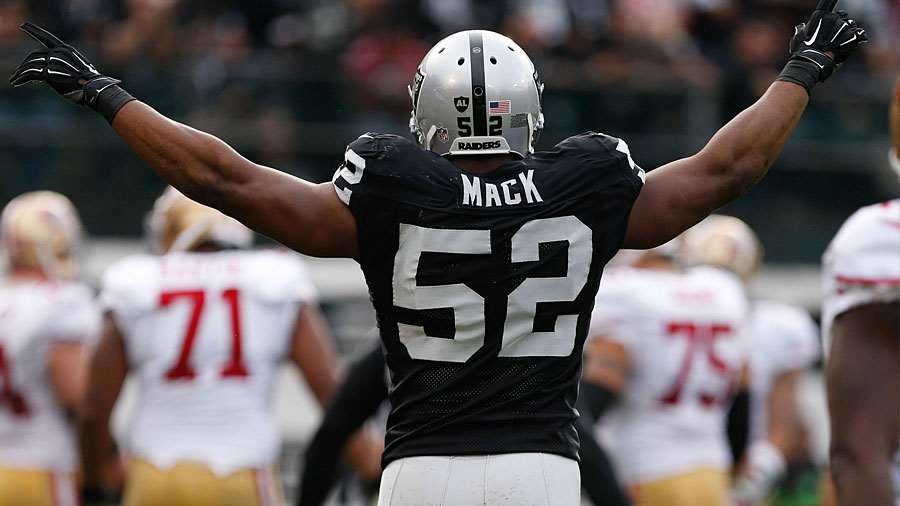 Once again…outside of the fact that the Sa Diego Chargers are looking for some revenge and have gone 3-1 ATS over their last four games, again…I don’t see any reason to back the Bolts in this AFC West divisional matchup.The Oakland Raiders are ‘due’ to win this contest if they stick to the script of their win-one, lose-one theme they’ve been on for the last five weeks.The Raiders have the slightly better offense – and plenty of motivation as they look to win their final two games and reach 8-8 in head coach Jack del Rio’s first season. The Chargers are 1-9 ATS in their last 10 games versus their AFC West division rivals and a pitiful 0-5 ATS in their last five games following a SU win.On the flip side of the coin, the Raiders are 5-1 ATS in their last 6 games against their AFC counterparts and a robust 8-3 ATS in their last 11 games following an ATS loss. I like the Raiders to get the win and ATS cover at home and 65 percent of the betting public agrees!My final score prediction is Oakland 27 San Diego 21
Older post
Newer post