NFL News and Rumors
Thanks to their impressive wins on Sunday, the Carolina Panthers and the Denver Broncos are the last two teams standing in the race for the Super Bowl 50 trophy. The Panthers virtually have everything but experience to win the title under the electrifying leadership of quarterback Cam Newton. The Broncos, meanwhile, are a living testimony that defenses wins championships and Peyton Manning looks to have some oil left in the tank for arguably the most important game of his life. But what do the NFL betting trends have to say about this epic clash in Santa Clara?

Running the Ball Comes With Huge Benefits in Super Bowl…

Being able to run the ball in the Super Bowl usually creates two major advantages. First, a team that runs the ball well early in the game often controls the line of scrimmage, which customarily helps the passing game. A team that is able to run the ball in the fourth quarter, especially with the lead in hand, invariably allows that team to salt away the games. In the history of the Super Bowl, teams that finish the game with the most rushing yards are impressively 37-12 SU and 34-12-3 ATS.This sets up an interesting scenario for the Super Bowl, since both teams are good at running the ball. Including playoffs, Carolina has rushed for at least 100 yards in 31 straight games, the third-longest streak since the 1970 merger. The balance offered by Cam Newton’s passing game often overshadows the need to run the ball, but they still do well with the ball on the ground, led by the dual-threat Newton (40-plus yards and two running scores vs. Arizona) and running back Jonathan Stewart, who accounted for 83 of Carolina’s 152 rushing yards against Arizona. The Broncos have equally been good running the ball—mostly out of necessity, due to their limited passing game—and it has paid well-enough for them. Against the Pats, they didn’t need to run the ball much, but still managed 99 rushing yards on 30 carries. Even more notably, the Broncos allowed the fewest yards per rush this season (3.28) and the third-fewest rush yards per game (83.6), something that could prove to be a huge difference-maker against Carolina’s rush-oriented attack.

…But Be Wary of This Rushing Betting Trend

Despite the aforementioned benefits of winning the running battle, the last 14 Super Bowls have seen teams with better run defenses going just 3-11 ATS in covering the spread. Part of the reason for this is that, whereas containing the run is important, the NFL is a more pass-friendly game, something that often swings more value to strong passing teams, as is detailed below. 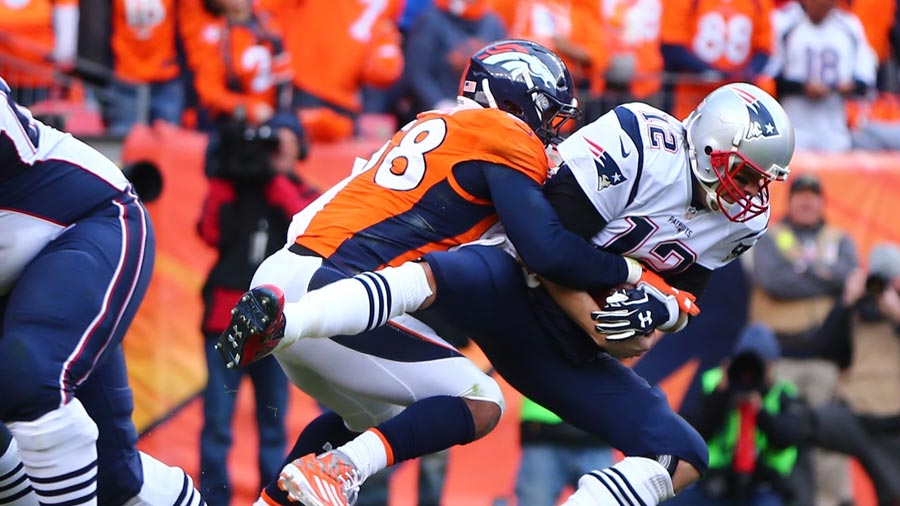 Passing the ball plays a pivotal role in determining winners in the NFL, and the Super Bowl is no different, as the yards per attempt directly relate to the number of big plays a QB will make (or not), which in turn affects the final score. Teams that have more yards per pass attempt are 41-8 SU and 36-11-3 ATS in the Super Bowl.Now, as you all know, Newton has been a beast in this department. Against the Cardinals for instance, he meticulously threw for a franchise-best 335 yards and two scores (on 19 of 26 passes), and also rushed for 47 yards and two more scores—making him the first player in the Super Bowl era to pass for 300 yards and rush for multiple touchdowns in a postseason game. The expectation, therefore, is that he will continue to shine.Manning, meanwhile, continued to struggle, completing just 53.1 percent of his passes and averaged 5.5 yards per attempt. Still, he threw for two touchdowns and made a couple of other big plays, so he could be up for another good game. After all, Peyton Manning has impressively, completed 68.2 percent of his passes in Super Bowl play. Put into perspective, the only QB with a higher completion percentage than him in multiple games played in the Super Bowl is Troy Aikman (70.0 percent).

Betting Favorites Good at SU, But Wary in the ATS

Of the 49 Super Bowls played so far, the favorite has won 31-18 SU, but gone just 22-24-3 in ATS betting. On paper, this means that Carolina looks to be a good value in the SU lines, while the Broncos should be a worthy consideration in the ATS lines, something that resonates pretty well with the majority of the early Super Bowl 50 bettors who are leaning on the Panthers to win and the Broncos to cover. But then again, both the Panthers and Broncos have been performing quite well recently in the winning and covering the spread. So if you need to pick a good value for both the SU and ATS lines, try considering the Moneyline trend detailed here-below.

Moneyline Winners are Good at Covering the Spread

In the history of the Super Bowl, the Moneyline winners are astoundingly 40-6-2 in the ATS lines, good for an 86.9 percent betting value. The trick here, therefore, is simple. Pick the correct Moneyline winner in the Broncos vs. Panthers game and you’ll almost be guaranteed to walk away with the ATS win in your pockets, as well. Sounds easy, right?

This is as rudimentary as it gets. Having an elite quarterback translates into points, irrespective of the opponent, which often leads to big wins and OVER totals. In this regard, we have a 19-11-1 OVER mark in the Super Bowls featuring elite QBs, and a 10-1 OVER record in games where both teams score 20-or-more points.In our case, Super Cam and his well-documented destruction of the Cardinals, along with big plays in the big win over Seattle (both which paid OVER bettors), are good examples of how elite QBs lead to OVER cash-ins. On the flipside, the recent shaky QB play of Manning (two TDs in his last four games) is a big reason behind the many UNDER totals in Denver’s books, including UNDERs in the last two games (against Pats and Steels).Considering the two QBs will be clashing in the Super Bowl, this game could thus go either way. If Newton continues to light it up with Carolina’s fluid offense that averaged 31-plus points this season, then an OVER will be the safe bet. If Manning and the Broncos, who averaged 22.2 points per game this season, continue to struggle, then an UNDER game will be in the offing.At the moment, I’m leaning on the UNDER, considering both Carolina and Denver have top-10 defenses that have impressively shutdown their recent opponents. In addition, Manning has not thrown multiple TDs in a Super Bowl game—he has thrown three TDs and four interceptions in his 3 Super Bowl games (1-2 SU)—so expecting him to light it up all of a sudden would be ill-advised.