NFL News and Rumors
The Carolina Panthers are having an unreal season, and from the look of things, they could be on their way to an unbeaten year. After clinching the NFC South a couple of weeks ago, they beat the Atlanta Falcons 38-0 in Week 14 to move to 13-0. Even more notably, that victory over the Falcons earned the Panthers one of the top two seeds in the NFC and a first round bye in the playoffs, leaving them with nearly nothing to play for in the final three weeks of the 2015-16 NFL odds.

What are the odds for Carolina Panthers to Remain Unbeaten?

In those three weeks, Carolina’s schedule is as follows:•    at Giants, Week 15•    at Falcons Week 16•    vs. Buccaneers, Week 17As you’d expect, the biggest question on everyone’s lips right now is; can the Panthers manage to finish the season unbeaten, or will any of the above three teams put an end to Carolina’s stellar run? Well, only time can tell, but based on what has happened so far, we can make some solid educated guess…

Why the Carolina Panthers Will Remain Unbeaten

You’ve probably read enough articles talking about how big a season NFL MVP front runner Cam Newton is having, or how Carolina’s unappreciated defense is a key reason behind the Panthers’ unbeaten run, so I won’t regurgitate all that stuff here. Instead, I will point you to this article from For the W!n Website written by Chris Chase, talking a lot of sense about why the Panthers deserve respect ahead of their Week 15 trip to New York. In many ways, we all must somewhat agree with Chase that the Panthers duly deserve respect for their run and the Giants (even with their solid passing game) should not be much of an issue for Carolina.Regarding the Falcons in Week 16, all you need is to re-watch highlights from their Week 13 encounter to know that they’ll be hard done to upset the Panthers. As for rookie of the year favorite Jameis Winston and his Buccaneers team, their surging performances this season suggest that they could be due for a big year in the 2016-17 NFL season. But as far as upending Carolina at home is concerned, we don’t see that happening, unless the Panthers decide to rest Newton and most of the starters in readiness for the playoffs.

If you have been watching the Panthers this season, then you’ll agree that they are playing in whole different universe, so it will take more than past trends to see their unbeaten run come to an end. After all, histories are made to be broken. That said, there are many trends working against them, particularly in their Week 15 fixture in New York against the Giants.For starters, since 1998, all teams that have been 13-0 or better have gone 1-11 ATS, including a 0-9 ATS record against non-divisional opponents. Moreover, the Giants have won 7 of their last 10 home games against NFC South members, giving them a very strong chance to beat the Panthers. Mind you, this is the same Giants team that was oh-so-close to beating the New England Patriots, so you can’t help but think that the Giants could put up a full performance this time round to claim the win. 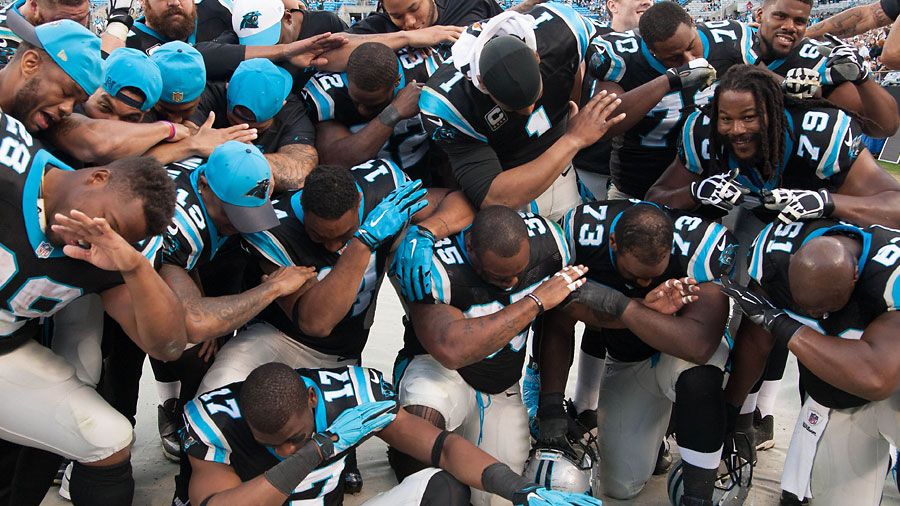 Yes, the Giants have lost seven games this season, but four of those have come by five points or less, so it’s not like the New Yorkers have been playing that badly. Oh, and just so that you know, the Panthers lead the NFL with 33 forced turnovers, which is just nine ahead of the second-placed Giants who’ve forced 24. If the Giants can therefore take advantage of playing at home and the fact that some key positions in Carolina’s squad are banged up (like RB and CB), they’d be able to upset the Panthers. Not to forget, two-time Super Bowl winner Eli Manning is able to step up to the big stage with star receiver Odell Beckham Jr.—who is streaking on 7 straight 100-yard games entering Week 15, and has 24 touchdown receptions in his first 25 games, which is the second-most in NFL history. That should offer a big chance for New York to do the “unthinkable” to Newton and the Panthers. And did I say Stephen Curry (a big Panthers fan) and the Warriors fell earlier this week, so it could be a week of big upsets to unbeaten teams? Well, there is that too.For Atlanta and Tampa Bay, there isn’t much hope, going by the way the Panthers shut out the Falcons last week and manhandled the Buccaneers at home in Week 4. Still, Winston and his Tampa Bay team are playing some good football this year, and the Falcons will be rallied up to avenge their embarrassing Week 13 loss. With that, it’s impossible to totally rule them out from sticking it to the Panthers, if the Giants fail to do so in Week 15.

If you asked me, I’d say that the Panthers make a hell of bargain right now to go undefeated and I’d be willing to bank a small amount of money on them to go 16-0, especially if Newton remains healthy and starts all games to the end of the season. Though the Giants are a talent-laden unit and the Buccaneers have been surging this season, Newton and his squad have handled all kinds of scenarios thrown at them this season, something that looks likely to continue. I would, however, be a bit wary of betting on the Panthers in the ATS lines, given the tendency of most teams to relax their tenacity once they’ve claimed all the necessary honors such as divisional titles and top seed in the playoffs. Either way, it has been fun watching the Panthers commendably go 13-0, so irrespective of what happens, Cam Newton and his 2014-15 teammates will remain etched in our fond memories of the year.
Older post
Newer post