NCAA Football Betting News
With the undefeated top-ranked Clemson Tigers heading in their second straight postseason game as an underdog, college football fans and bettors need to know if the unbeaten Tigers are not only capable of beating the favored Alabama Crimson Tide when they square off in tonight’s match, but whether or not they actually will.Thanks to this expert feature highlighting seven things you should know before wagering on Clemson to pull off the upset on 2016 National Championship betting lines, you’re going to have a better chance than ever of cashing in with a winning wager.Okay, with that said and kickoff time for tonight’s title tilt quickly approaching, let’s get started.

Preparation for the #NationalChampionship didn’t start this week… The Dream began a long time ago. #ALLIN https://t.co/OuxSSnIr7T

Not only did Clemson rank 16th in the nation in scoring (38.4 ppg), but the Tigers come into the national championship on a red-hot roll, having scored 33 points or more in each of their last five games while putting up 37 points or more in three straight. Clemson runs and passes the ball equally well and should give the Tide arguably their toughest test all season long.

2. Don’t Sleep on the Defense

With gifted quarterback Deshaun Watson being the main man for the Tigers as far as the national media attention goes, Clemson’s stingy defense often goes really unnoticed.The Tigers ranked inside the top 20 in all four major defensive statistical categories by finishing sixth in total defense (302.0 ypg), ninth against the pass (177.2 ypg), 18th against the run (124.8 ypg) and 16th in points allowed (20.0 ppg).Clemson has a pair of elite defensive ends in junior Shaq Lawson and Kevin Dodd. Lawson had a fantastic season by recording 56 tackles, a team-leading 23.5 tackles for a loss and 10.5 sacks.Unfortunately, Lawson is banged-up and reportedly only about 60 percent healthy, though he is reportedly going to try to play tonight. Dodd added 55 tackles, 18.5 tackles for a loss and nine sacks. The Tigers also have a phenomenal secondary that is headed up by All-American sophomore cornerback  MacKensie Alexander.

Head coach Dabo Swinney has made a mantra by preaching an, us-against-the-world mentality – and the oddsmakers keep helping the Tigers stay focused on that by making them underdogs in their last two games despite being the only undefeated team in the nation.“He’s always been the underdog,” said former Alabama quarterback Jay Barker of  Swinney. “He has had to fight for everything and has never been given anything. That’s what has made him so successful. He loves being the underdog because he’s lived it his entire life.”Prior to their CFP semifinal win over Oklahoma last week, Swinney of his team, “I told them, ‘you ain’t favored to win the damn game, but we ain’t no underdog.”“We are 14-0, and we were underdogs last week, it’s all a brand thing,” Clemson cornerback Mackensie Alexander said. “Everyone cares about the brand, the Alabama brand. I understand it’s a lot of fans, and they’ve done it for a long time, but this is a new year, and it’s our time.”“They said Oklahoma was the best team, and we just went out there and proved them wrong,” Clemson safety Jayron Kearse said. “So that’s the same thing we have to do with Alabama. They say Alabama’s a seven-point favorite; we have to go out there and prove them wrong.”

4. Wayne Gallman is Elite…Even if you Don’t Know it!

The speedy sophomore running back Wayne Gallman is as elite as they come at his position – even if you didn’t know it.Gallman has rushed for 1,482 yards and 13 touchdowns coming into this contest, including a 150-yard, two-touchdown effort against Oklahoma in the CFP semifinals.I know Alabama shuts down their opponents’ rushing attack like  nobody’s business, but I’m thinking the elusive Gallman could break one run for a game-changing play. The most encouraging thing about Gallman’s recent play is that, in Clemson’s semifinal win over Michigan State, he appeared to get faster and stronger as the game wore on while the Spartans’ defense simply wilted. If Gallman breaks one against the Tide, it could spell doom for Alabama. 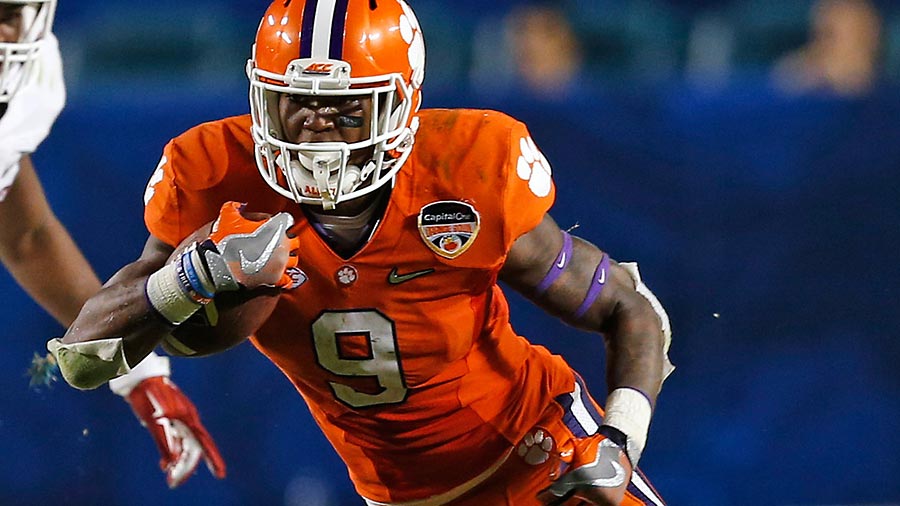 Make no mistake about it, Clemson quarterback Deshaun Watson is a nightmare to stop and arguably he best quarterback in all of college football!Watson’s stellar play this season  was the driving force behind Clemson’s explosive sixth-ranked offense (38.4 ppg). The sophomore signal-caller completed an incendiary 68.2 percent of his passes for 3,704 yards with 31 touchdowns and 12 interceptions, but it is his incredible running ability that could spell doom for the Tide in this affair. The super elusive Tigers’ quarterback rushed for a stellar 1,032 yards and 12 scores and will give his team an added route to beating the mighty Crimson Tide.Make no mistake about it, Deshaun Watson is the kind of game-changing player that could bring the Clemson Tigers their first national championship since 1981.Alabama defensive coordinator head coach Kirby Smart spoke about Watson, a player he recruited in high school.“It’s almost like a mixture of the three guys, with Nick Marshall as a perimeter runner,” Smart told al.com. Deshaun runs well on the perimeter. Johnny Manziel was a great athlete, create things in space. So does Deshaun Watson. This guy runs more power run game like you would say Cam Newton does.”

Last but not least, more ATS statistical trends suggest an ATS cover by the Tigers.Clemson has gone 13-7 ATS in their last 20 games as an underdog, including 3-0 ATS in their last three such games. The Tigers are 8-3 ATS over their last 11 games as a dog and that just doesn’t bode well for an Alabama team that is just 9-10-1 ATS in its last 20 games as a favoriteDon’t be surprised if the Tigers cover the title game spread by winning outright – I believe they will do just that!
Older post
Newer post