NCAA Football Betting News
Given the ever-shortening tenures of college football coaches these days, it’s impressive to stand back and take a look at what Virginia Tech coach Frank Beamer has accomplished during his time on campus. Beamer coached his last NCAAF betting home game for the Hokies this past Saturday against #17 North Carolina, and while the Hokies just fell short, his legacy is secure, and he will be one of the coaches in the college Hall of Fame.

Great being able to share so many memories with @MikeVick & Corey Moore long after the game was over yesterday #1999 pic.twitter.com/ElVdpUKqpa

Shane Beamer is the Hokies’ associate head coach. However, he was only nine years old when his father, Frank, took the job at Virginia Tech way back in 1987. He took the job around Christmas in 1987, although the whole family would not move to Blacksburg, Virginia until the summer of 1988, when Beamer’s kids had finished the school year.Back then, coaches had longer leashes. Beamer only had two winning seasons in his first six. In that sixth season, Virginia Tech went 2-8-1. Beamer actually had a home number that was listed in the phone book, and fans were giving the family nasty calls. His son, Shane, was able to see how close the line was between losing and winning a game. During that 2-8-1 campaign, there were six games where the team blew fourth-quarter leads. Starting in 1993, though, Virginia Tech went to a bowl game, and they kept going to bowls every season after.The big wins didn’t take that long to come, though. Beamer led the Hokies to a 12-10 upset of #9 West Virginia on the road. The biggest player to come through Blacksburg, of course, was Michael Vick. Frank had promised Vick’s high school coach that he would redshirt him for a season, and so even though the Hokies were running a safety out at quarterback during that season, Beamer kept his word – another throwback way in comparison to what many coaches would do today. 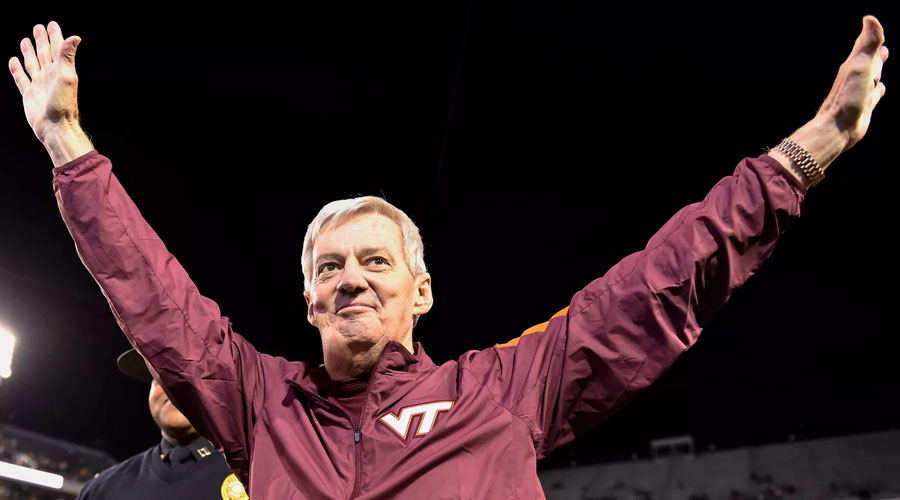 Vick’s redshirt freshman season, of course, was an amazing one. He led Virginia Tech to its first unbeaten regular season since 1954 and was a Heisman Trophy finalist. He played another year for Beamer before entering the 2001 NFL draft, when he would go with the #1 pick. Beamer remains close with Vick, despite Vick’s problems with the legal system.Beamer stayed loyal to Virginia Tech through the years. Alabama offered him its position in 2000 and again in 2002. The Green Bay Packers had interviewed him in 1999. One thing that Beamer is proudest of is the fact that his program has had 25 different sets of brothers play for the program. He considers that a real tribute to how his program treats players.Virginia Tech hasn’t had as good a year this year as in seasons past. They couldn’t replicate the 2014 upset of Ohio State this season. Even so, Beamer has a legacy in Blacksburg that many other coaches envy. In the modern era, lasting 28 years at one school simply doesn’t happen anymore. Beamer made the most of his opportunity to make his mark on a program and on an institution.
Older post
Newer post