NBA News and Rumors
After an action-packed slate of NBA lines over the weekend that was mainly highlighted by Golden State record-breaking 15th win of the season, Monday night presents us with a mild slate of seven games. Here are our online betting predictions and NBA picks for the top games of the day.

Bring a new pack of @Hanes socks to the game tonight you could win tix to an upcoming game! https://t.co/yIRxiJb9Cq pic.twitter.com/gR1Jp4F4pG

Betting on the Sacramento Kings at Charlotte Hornets

DeMarcus Cousins claimed his seventh double-double of the season of 29 points and 12 rebounds to help the Kings to win 97-91 against the Magic on Saturday. Cousins and the Kings (5-9) will, however, have their work cut out for them, as they face a Hornets (7-6) team that is having one its best starts of the season, coming off a 113-88 blowout win over the 76ers on Friday. Al Jefferson was the team’s best weapon in that win, recording his third double-double of the season with 26 points and 10 rebounds. Even more notably, the Hornets have been absolutely dominant at home this season, streaking on five wins ahead of this fixture. It will therefore take something really special from the Kings to upset the home-favored Hornets in this game.Writer’s Prediction: The Hornets extend their home winning streak to six, but Sacramento keeps the scores tight to cover the spread, with the total going over as both teams score 100-plus points each.

Betting on the Detroit at Milwaukee

Despite a good game from Greg Monroe, who recorded 11 points and 14 rebounds (his sixth double-double of the season), the Bucks could not contain the Indiana Pacers, who delivered a resounding 123-86 victory over Milwaukee on Saturday. The Pistons equally didn’t have it well in their last outing, suffering a tough 97-95 loss to the Wizards on Saturday. But unlike the Milwaukee, the Pistons showed better poise and generally played well in the game, led by Marcus Morris, who posted 18 points, nine rebounds, and four assists in the losing effort. It’s hard to know what to expect from these two teams, given their rather shaky seasons and the fact that their head-to-head record stands at 5-5 SU over the past 10 meetings. Even so, Milwaukee is 1-5 SU in its last 6 games, underlining its more profound struggles, while the Pistons have been playing better basketball, which should give the visitors more confidence of getting a win.Writer’s Prediction: The Pistons bounce back with a rather dominant performance, beating their hosts to claim both the SU and ATS, with the total going UNDER in line with the trend of 4 UNDER totals in the last 6 games between these two teams in Milwaukee. 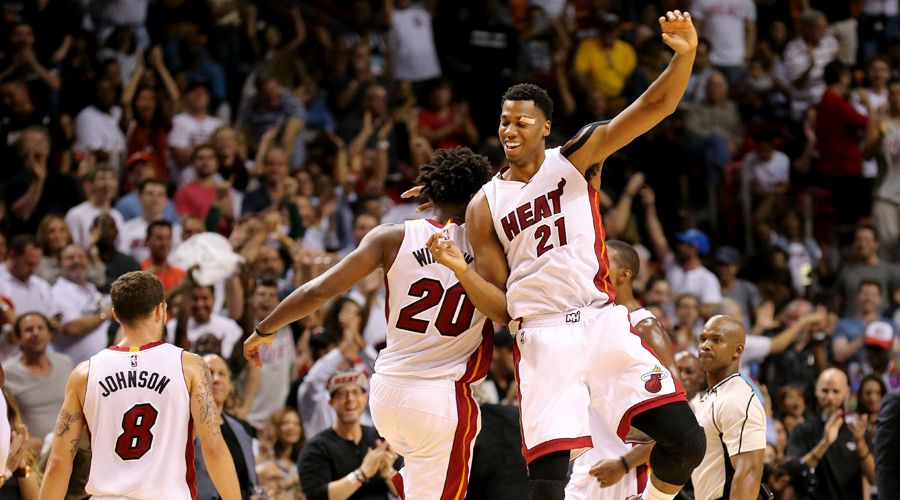 Betting on the New York Knicks at Miami Heat

In probably the biggest game of the night, the Miami Heat (8-4) will take on the visiting New York Knicks (8-6) at American Airlines Arena, as both teams seek to claim their ninth win of the season. Both squads are coming off impressive performances in their previous outings–the Knicks claimed a 107-102 win over the Rockets on Saturday, paced by rookie Kristaps Porzingis, who accumulated 24 points and 14 rebounds (his sixth double-double of the season). The Heat, on the other hand, rode on a fiery shooting performance from Dwayne Wade, who went 8-for-17 for 27 points, helping Miami to beat the visiting 76ers 96-91 on Saturday. Given New York’s habit of getting in foul trouble (23.5 fouls per game), expect the Heat to get tons of opportunities from the free throw line. Even so, the Knicks solid defense (that ranks top in the league in terms of three-point field goal percentage allowed at .296) to limit the Heat from lighting it out from beyond the arc, which should offer some balance in the game. Meanwhile, Porzingis and Carmelo Anthony should continue to shine and cause all kinds of problems to the Miami Heat defense.Writer’s Prediction: The visiting Knicks out-shoot Miami, allowing the Melo and company to walk out of Miami with a thrilling hard-earned victory.

Betting on the Oklahoma at Utah

In a matchup featuring two teams with the best records in the Northwest Division, the Thunder (8-6) and Utah Jazz (6-6), a lot of fireworks can be expected at the Vivint Smart Home Arena. In their last outing, the Jazz lost to the Mavericks 102-93 on Friday. The Thunder, meanwhile, are coming off a 117-114 victory over the same Mavs’ squad on Sunday, a game that saw Russell Westbrook continue his solid season, totaling 31 points and 11 assists to claim his 10th double-double of the season. It remains to be seen if Westbrook and co. will be able to outsmart the Jazz, who came out on top the last time the two teams met. Still, with the Thunder leading the head-to-head record over their last 10 meetings, at 7-3, and going by Thunder’s strong start to the season, it won’t be a surprise if OKC claims the road win.Writer’s Prediction: OKC plays well enough to claim a narrow road win over the Jazz, with the total probably going high enough for an OVER.
Older post
Newer post