NBA News and Rumors
When football betting fans talk about the most dominant players in the history of the modern game, they cannot have that discussion without mentioning Tom Brady and Peyton Manning. They have both played at an incredibly high level for 15 years or more, and both have Super Bowl rings to show for their efforts. They will meet once more, in what may prove to be their last match-up, when the New England Patriots travel to Sports Authority Field at Mile High to face the Denver Broncos in the AFC Championship Game on Sunday, January 24. Kick-off is set for 3:05 PM EST on CBS.

This week’s national cover: We’re getting you ready for Manning vs. Brady XVII https://t.co/kUTm28eEiw pic.twitter.com/gCB9SHliFt

The Betting History of Brady Vs Manning

You have to go all the way back to September, 2001 to find the first time that these two great QB’s went head to head. It was the Patriots with the 44-13 win in that one, but it was a performance that was very unBrady-like. Brady only completed 13 of 23 passes for 168 yards that day, as the NE defense did a great job of keeping Manning in check. He was a whole lot better when the Patriots beat the Colts later that year, connecting for 3 TD passes and completing all but 4 passes. Brady was the winner of record in their next 2 meetings, both of which came in 2003. One of those wins was in the AFC Championship Game, which was odd in that Manning threw 4 picks that day.

Manning Gets His First Win, Finally!!

Manning and the Colts finally got the better of Brady at the 7th time of asking. The Colts romped to a 40-21 win over the Patriots in a game that seemed to turn the tide in this QB match-up. Manning won again in 2006, and then helped the Colts knock off the Patriots in the AFC Conference Final that very same season. There were only 3 more meetings between Brady and Manning while Peyton was in Indianapolis, and it was Brady and the Patriots who edged it 2-1. 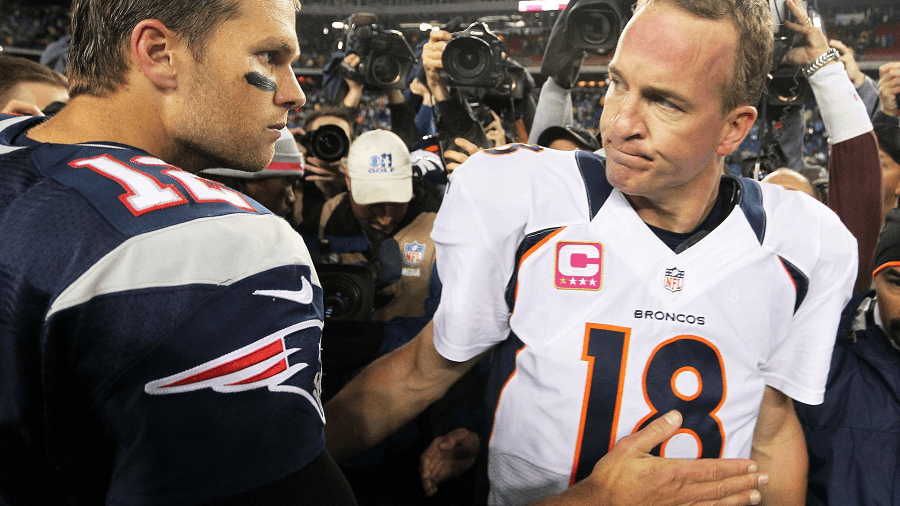 Brady Vs Manning: The Denver Years

Brady and the Patriots won the first two meetings against Manning after he made the switch to the Broncos, but it was Peyton who ended up being on the winning side in the big one. Denver took out New England 26-16 in the 2013 AFC Championship Game. Manning was clinical in that game, throwing for 400 yards. The last meeting between the two came back in November of 2014, and it was Brady who once again came out on top.

Who wins this weekend, Brady or Manning?

In the 16 games that these two have gone head to head in their careers, it has been Brady who has won on 11 different occasions. He is certainly playing at a higher level than Manning right now, which leads me to believe he could hit 12 this weekend.
Older post
Newer post