NFL News and Rumors
When it comes to reasons why the Denver Broncos could win Super Bowl 50, the age-old adage that says ‘defense wins championships’ is the first thing that comes to mind. However, that’s not the only reason why Peyton Manning and company could bag this season’s league title. Let’s examine my top five reasons why you should bet on the Broncos to pull off a betting upset.

I know Peyton Manning is aging faster than an Octogenarian coming up on his 90th birthday, but the fact of the matter is that Manning has been pretty important in helping the Broncos reach Super Bowl 50. Despite suffering a torn plantar fascia that caused him to miss six weeks of the regular season and playing some of the ‘worst’ football of his career in throwing nine touchdown passes and a whopping 17 interceptions during the regular season, Manning has been rock-solid in leading the Broncos to two postseason wins.Manning has only tossed two touchdown passes and completed an uninspiring 55.1 percent of his passes this postseason while fumbling twice, but what the future Hall of Famer hasn’t done is throw the costly interception while keeping the Broncos in every game. “We’ve seen that resilience his whole career”, executive vice president John Elway said on Sunday night. “You look at what he’s done, what he’s come back from. Even four years ago, him coming off the neck. That’s made him what he is. The resilience that he has. He’s a great competitor, and he keeps coming back.”

Gary Kubiak may be the head coach of the Denver Broncos, but for me, it is the incomparable genius of defensive coordinator Wade Phillips that has been the real story in Denver as he helped turn the Broncos into a defensive monster – all after getting shut out on the job circuit one year ago.Phillips has been arguably the best defensive mind in NFL history for the better part of the last three decades and rightfully received a ton of praise from New England Patriots head coach Bill Belichick after the Broncos limited the Patriots to just 18 points in the AFC Championship game. “Wade does a good job. Wade’s an excellent coach,” Belichick said. “He’s got a good scheme, does an excellent job of defending the team that he plays against. He’s done that throughout the course of his career.” 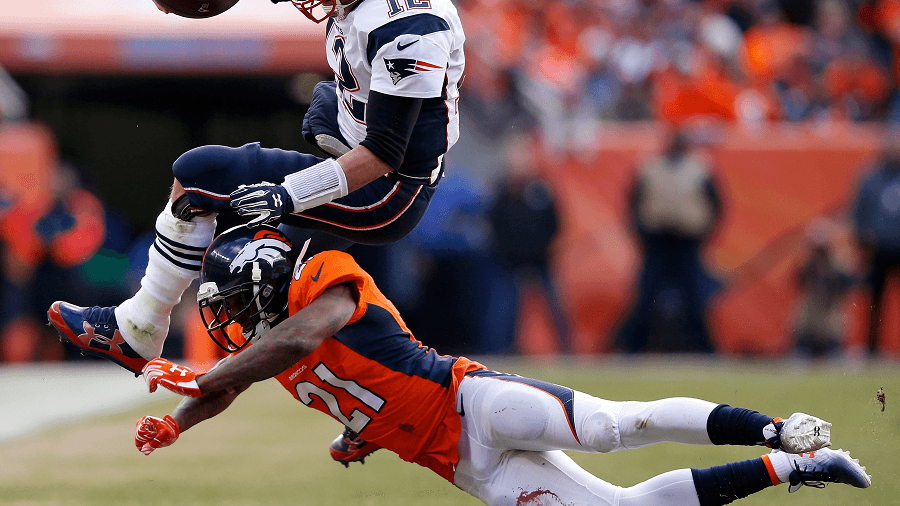 Harris Jr. and Talib both earned Pro Bowl berths this season and are the type of cornerbacks that don’t need any help to man their respective ‘islands’ and that makes Denver’s defense more dangerous as it frees up their linebackers and safeties. Harris Jr. picked off two passes during the regular season and scored one touchdown while Talib added three picks and two touchdowns. The pair could force the once-inaccurate Newton into one or two costly game-changing turnovers.

One of the main reasons I picked Denver to beat New England was the pass rushing ability of Pro Bowl linebackers DeMarcus Ware and Von Miller against the semi-immobile Tom Brady. Miller recorded 11 sacks during the regular season while Ware added 7.5 sacks in 11 games. While the pair will be facing arguably the game’s best dual-threat quarterback in Carolina’s Cam Newton, I guess if anyone can slow down the runaway train that Newton often is it would be a pair of elite linebackers like Ware and Miller.“I think it’s the same type of pass rush,” Ware said. You can’t rush timid because if you do that, he’s one of those pocket quarterbacks that can get the ball deep down the field. You have to be able to get pressure on him, but you have to be decisive on how you’re rushing. You can’t be a wild rusher with big, wide B-gaps or let him run in the A-gap and do what he wants to do because he’s actually a running back himself. He can get yards and make big plays so you have to make sure the pocket is tight when you’re rushing against him, but you still have to be aggressive.”

The No. 1 reason that the Denver Broncos could win Super Bowl 50 is the team’s lockdown defense! The Broncos ranked first in total defense (283.1 ypg), first against the pass (199.6 ypg), third against the run (83.6 ypg) and fourth in points allowed (18.5 ppg). Denver has been completely masterful in limiting Pittsburgh to 16 points in the divisional round and New England to just 18 points in the AFC title game.In addition to having four play-making Pro Bowlers on their roster, the Broncos also tied for seventh in takeaways (27). “Yeah, that’s really special,” head coach Gary Kubiak said of the accomplishment. “Going into the game, I think that was something we talked about. … (Defensive coordinator) Wade (Phillips) and the coaches have come in and done a great job. The players responded to Wade’s scheme very well.”The Broncos allowed just one opponent to reach the 30-point plateau this season while giving up one 100-yard rushing performance and one 300-yard passing day.
Older post
Newer post