NFL News and Rumors
The Dallas Cowboys will look to snap their six-game losing streak when they square off against the young Tampa Bay Buccaneers, but getting the NFL lines SU and ATS win against the suddenly feisty Bucs may not be quite as easy as they expect. Here’s why.

The Cowboys enter this contest coming off a heartbreaking 33-27 overtime loss against Philadelphia on Sunday while failing to cover the spread as a 3-point home dog. The Boys have lost all six of the games they’ve played without starting quarterback Tony Romo under center. “You’ve just got to keep going,” Dallas coach Jason Garrett said. “You’ve got to keep banging away. You’ve got to keep doing things the right way on the practice field, playing the right way.” Veteran quarterback Matt Cassel went 25-for-38 for 299 yards with three touchdowns and one interception. Wide receiver Cole Beasley caught nine passes for 112 yards and two scores while fellow wideout Dez Bryant accounted for 104 receiving yards on five catches in his second game back from a broken foot. Veteran running back Darren McFadden gained 117 yards on 27 carries, but none of that mattered in the end after Philly quarterback Sam Bradford hooked up with wide receiver Jordan Matthews for a game-winning 41-yard TD pass in overtime. Dallas ranks 26th in scoring (20.0 ppg) and 21st in points allowed (25.5 ppg).

Tampa Bay fought their hearts out but still suffered a closer-than-it-looks, 32-18 loss against Eli Manning and the Giants on Sunday while failing to cover the spread as a 1.5-point home underdog. 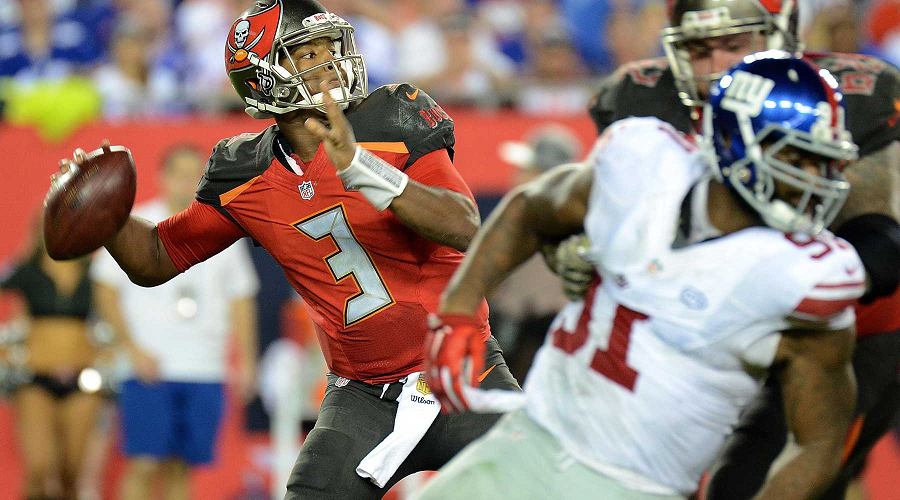 Rookie quarterback Jameis Winston completed 19 of 36 passes for 249 yards but failed to throw a touchdown in the loss. The Buccaneers also repeatedly turned the ball over in losing three of the four fumbles while allowing the Giants to keep possession of the ball for nearly 35 full minutes. Even with all of their miscues, the Buccaneers still had a chance to tie the game in the fourth quarter before a missing a two-point conversion. The G-Men then added a field goal with 28 seconds remaining and a defensive touchdown on the game’s final play when the Bucs attempted a lateral. “Red zone is huge,” Bucs guard Logan Mankins said. “It’s hurt us a lot this year, and it really caught up to us today. Seven points compared to three is so big, especially when you’re down there that many times. What’d we kick, (four) field goals today? Just turn three of them into touchdowns. … That was huge.” Tampa Bay is ranked 18th in scoring (22.6 ppg) but just 29th in points allowed (28.9 ppg).