NFL News and Rumors
As we get close to Super Bowl, let’s pay a little homage to outraged bettors from the past by taking a look at some of the biggest upsets that the NFL’s championship game has featured.

Did you know that Super Bowl III was the first championship game referred to as a “Super Bowl”? The first two were actually called the “NFL-AFL Championship Game,” and both of those were big wins for the NFL, as the Packers rolled to easy wins over Oakland and Kansas City. This matchup featured the Baltimore Colts and the New York Jets, who made their only Super Bowl appearance led by “Broadway Joe” Namath, the swashbuckling quarterback who guaranteed a win.The Colts were favored to win by 18, and the game took place in Miami in front of a sold-out Orange Bowl crowd. The Jets picked off three passes by Earl Morrall and Johnny Unitas, racing to a 16-0 lead that held into the fourth quarter. The Colts would score with 3:19 left, but the Jets held on to win. The Jets ground the clock down in the fourth quarter by sticking to the ground game, not wanting to risk a turnover. This win validated the AFL and set the stage for the merger that would take place after Super Bowl IV.

There have only been two Super Bowls featuring an undefeated team. Super Bowl VII featured the Miami Dolphins, who were able to seal the deal with a 14-7 win over Washington. The New England Patriots brought an 18-0 record into this title game against the New York Giants, who had only made it into the playoffs via a wild card entry. New England was favored to win this game by a dozen points.This game was mostly a defensive struggle, but the Patriots went up 14-10 when Tom Brady found Randy Moss in the end zone. However, the Giants refused to die, and Eli Manning led his team down the field on a play punctuated by the “Helmet Catch,” a desperation pass that receiver David Tyree clutched to his helmet as he fell to the ground — the last catch he would ever make in the NFL. On that play, Richard Seymour and Jarvis Green both had Manning’s jersey in their hands, but he jolted free to send the ball down to Tyree. Manning followed that up with a 13-yard touchdown pass to Plaxico Burress to put the Giants up with 35 seconds remaining. 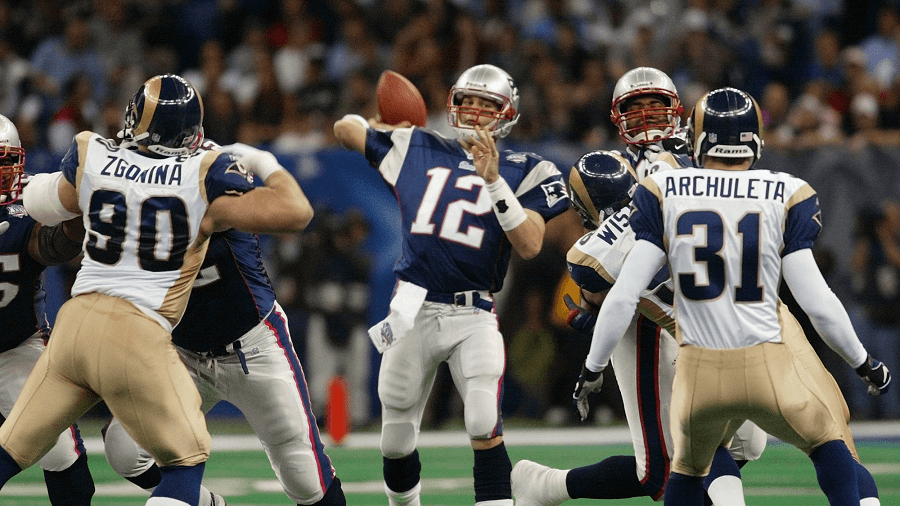 Yes, there was a time when the Patriots weren’t favored to win every playoff game. In fact, they were 14-point underdogs to the St. Louis Rams in Super Bowl XXXVI. The Rams had a terrific offense led by Kurt Warner under center, tailback Marshall Faulk and wideouts Issac Bruce and Torry Holt. The RAms were called the “Greatest Show on Turf,” and it was the Pats who were the upstarts. This was the year when New England was starting Drew Bledsoe at quarterback but he went down with a chest injury, and Brady took the starting job. The Patriots would win, 20-17, on the strength of a 48-yard field goal by Adam Vinatieri.
Older post
Newer post