NFL News and Rumors
The Denver Broncos may have cashed in as an underdog selection in their AFC Championship game win over Tom Brady and the New England Patriots last weekend, but Peyton Manning and company look like they’ll have a much tougher time repeating their feat when they battle Cam Newton and the Carolina Panthers in Super Bowl 50. If you want to find out of the Denver Broncos are a good underdog bet to at least cover the spread against Carolina, then you’ve come to the right place! The Broncos and Panthers will square off in Super Bowl 50 on Sunday, February 7, 2016 at 6:30 PM ET, live from Levi’s Stadium in Santa Clara, California. Okay, let’s get started.

Why Bet The Denver Broncos Odds at +4.5

Because of their stupendous defense!The Broncos have shut down high-scoring Pittsburgh Steelers and New England Patriots in their last two games, giving up just 16 and 18 points respectively against their AFC conference rivals.Denver’s suffocating, league-leading defense made Ben Roethlisberger and Tom Brady look as pedestrian as they ever have – and apparently, they have a game plan for keeping Carolina quarterback Cam Newton in check in Super Bowl 50 after forcing Brady into a horrific 27-of-56 outing while sacking the future Hall of Famer four times and hitting him an insane 23 times.“You can’t rush timid, because if you do that, he’s one of those pocket quarterbacks that can get the ball deep down the field,” Broncos Pro Bowl linebacker DeMarcus Ware said. “You have to be able to get pressure on him, but you have to be decisive on how you’re rushing. You can’t be a wild rusher with big, wide B-gaps or let him run in the A-gap and do what he wants to do because he’s actually a running back himself. He can get yards and make big plays, so you have to make sure the pocket is tight when you’re rushing against him, but you still have to be aggressive.”The Broncos finished the regular season ranked first in total defense (283.1 ypg), first against the pass (199.6 ypg), third against the run (83.6 ypg) and fourth in points allowed (18.5 ppg) and have a quiet confidence heading into Super Bowl 50.“Let’s bring the Orange Crush back. That’s the way we played (against New England),” Ware said. “We played even beyond our own standards. It was the type of game that’s going to carry over and motivate us in the Super Bowl.” 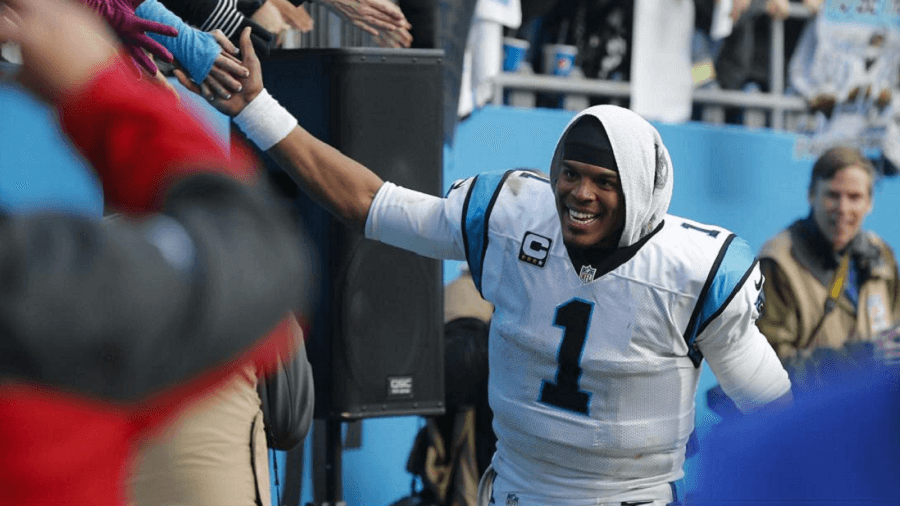 Why Bet The Carolina Panthers Odds at -4.5

The first reason to back the Carolina Panthers is because of the jaw-dropping play of ‘lock’ league MVP Cam Newton. Carolina’s dual-threat signal-caller accounted for a whopping 45 touchdowns in the regular season (35 passing, 10 rushing) while throwing for 3,837 yards and finishing with a stellar 99.4 passer rating. Newton was also the Panthers’ second-leading rusher (636 yards) and has been virtually unstoppable all season long, prompting Denver Pro Bowl cornerback Talib Aqib to heap praise on the former Heisman Trophy winner. “He’s throwing the ball amazing right now,” Talib said. “And you know what he can do with his legs. He’s the best of both worlds, he’s probably the most dangerous [quarterback] in the NFL right now.”When questioned about Newton’s one-of-a-kind skill set, Talib added. “Man, super unique. I never seen nobody who was that size who looks like a typical NFL quarterback who can sit in the pocket and then you can run … you probably play any position in the NFL that wanted. He’s definitely a unique player. Like I said, he’s probably the most dangerous quarterback in the NFL right now.”In addition to Newton’s play this season, the Panthers also have a Pro Bowl tight end in veteran Greg Olsen and another Pro Bowler in underrated running back Jonathan Stewart. Making matters even more difficult for the Broncos is the fact that Carolina also owns one of the best defenses in all of football. The Panthers ranked sixth in total defense (322.9 ypg) and an identical sixth in points allowed (19.2 ppg).If they Panthers can pressure Peyton Manning the same way they did in forcing Arizona’s Carson Palmer into four interceptions in the NFC Championship game, the Broncos could be looking at being on the wrong end of a Super Bowl blowout for the second time in four seasons.

It’s a damn shame and almost unimaginable, but Peyton Manning is going to finish his career with fewer Super bowl titles than younger brother Eli Manning! Carolina has won 10 straight games as a favorite of six points or less while compiling a very solid 7-3 ATS mark during the span. The Panthers have been even more dominant as a 4-point favorite, going 10-0 SU and a near-perfect 9-1 ATS in their last 10 such contests. The Panthers are 4-1 ATS in their last five games against a team with a winning record, 11-4 ATS in their last 15 games overall and a consistent 9-4 ATS in their last 13 playoff games.Conversely, the Broncos are just 2-5-1 ATS in their last eight playoff games and 1-5 ATS in their last six games following an ATS win. A convincing 65 percent of the betting public likes Carolina to get the ATS win and I believe that’s easily the right call.Denver may have an elite defense, but nothing I’ve seen this postseason leads me to believe that anyone can either stop cam Newton – or the Carolina Panthers – from winning Super Bowl 50!My final score prediction: Carolina 31 Denver 17
Older post
Newer post