NFL News and Rumors
Thanks to the return of some key pieces in their squad, the New England Patriots returned to winning ways in the final stretch of the NFL regular season odds, and in convincing fashion against the Chiefs, if I may add. Not only did the Patriots put up 27 points against a Kansas City team that had allowed less than 12 PPG in their 11-game winning streak entering the Divisional Round matchup, but Bill Belichick’s team did so with meticulous professionalism early in the game. With a bit of some help from Kansas City’s poor clock management, New England’s defense eventually stopped Kansas City’s come-back attempt, but the biggest story of the day was undoubtedly the fluency in New England’s offense, spearheaded by the return of Patriots leading receiver Julian Edelman.Can the looking-good Patriots offense continue to march on, or will Denver’s league-best defense put the clamps on New England like it did in Week 12 of the regular season? Find out what our NFL betting experts have to say on that and much more in the New England AFC Championship game offense overview that is comprehensively prepared for you below.

Even though Pats top aerial target TE Rob Gronkowski (who led the team in receiving yards, catches and touchdowns in the regular season) didn’t explode for mega yardages against the Chiefs, he proved to be very important for his team, as usual, scoring the two touchdown passes thrown by Brady against Kansas City. This was in spite of the fact that the Chiefs were one of the best teams at defending tight ends this season. You can therefore bet your money confidently on Gronk to continue being impactful for his team in the passing game, along with Edelman and Danny Amendola. 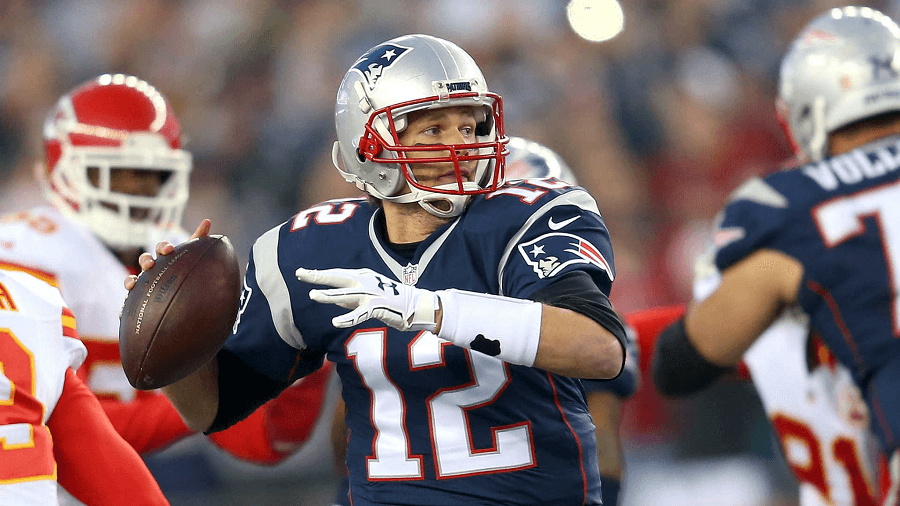 Brady is a Proven Maestro in the Playoffs

Impressive as it is that the Pats receivers have been shining in their aerial game, most credit must duly go to the team’s quarterback, Brady. As he has done time and time again, Brady usually elevates his play in the playoffs, a key reason he is the All-time career leader in postseason wins with 21 playoff victories. And even with a number of his top targets missing down the stretch of the regular season, Brady still found a way of maintaining efficiency, finishing with an NFL-best 36 touchdowns, along with 4000-plus passing yards. So, in the same way he was able to find a way of outsmarting Kansas City’s solid defense, you can expect him to have another decent outing against Denver’s excellent D.

In the final two weeks of the regular season (against New York Jets and Miami Dolphins), Brady was pressured on a whopping 32.1% of his dropbacks, which led to his struggles, as New England lost both games. But with the return of some of Brady’s starting offensive linemen against the Chiefs, things changed in a big way, as Brady was pressured (sack or duress) on just 4 of his 43 dropbacks (9.3%)—his 2nd-lowest of the season. This healthy O-line will play a very crucial role in stopping the fearsome pass rush unit in Denver.

Despite having an array of weapons to use in the passing game, the Patriots are virtually dead in their running game, owing to the injuries of running backs Dion Lewis (Knee, Injured-Reserve List) and LeGarrette Blount (Hip, Injured-Reserve List). Against the Chiefs, for example, the available running backs struggled mightily, as Steven Jackson had 6 rushes for just 16 yards while James White had 1 rush for 5 yards. This could easily limit the Patriot against Denver, especially if Denver’s passing defense comes up big.Still, this is a New England team that finished the regular season ranked at #6 in offensive efficiency, totaling 5,991 yards (374.4 YPG) and 29.1 PPG, despite the injury concerns in the tail-end of the season. Not to mention, Brady’s passing game did just fine against K-City’s D, as the QB finished with 303 yards and two touchdowns, and was not sacked for the entire game. And even in the 30-24 overtime loss to Denver at Mile High in Week 12, a game that Edelman didn’t play, Brady still impressively racked up 280 yards passing and three touchdowns. So, clearly, the Patriots signal-caller should be due for a big offensive game this week, irrespective of Denver’s solid defense, right? Yeah, I thought so too!
Older post
Newer post