NFL News and Rumors
Now that Sam Bradford has gone down with a concussion and could miss one or two games, is it time for the team and their NFL betting fans to panic? After all, while Mark Sanchez did take the New York Jets to an AFC championship way back when, he is also the lord of the butt fumble and has never really played all that well for the Eagles. His crucial interception late in the game against Miami this past week was a major factor in the Eagles’ loss.

So is it time to panic? Actually, there isn’t that much difference between Sanchez and Bradford as far as production goes. Benching Bradford would likely have torpedoed his confidence, without giving the team much of a boost. Now that Bradford is on the shelf with an injury, the team will still likely limp along on offense. As Bill Barnwell wrote on ESPN.com, this switch is basically “shuffling the deck chairs on the Chiptanic.”So will the Eagles now plummet? Probably not. Opposing defenses are not worried about Bradford stretching the field, so they are jamming eight and nine men into the box to shut down the running game. Sanchez has less accuracy and arm strength than Bradford, but he also has a better track record with what the league defines as “deep” throws (16 or more yards in the air). His rating last year on those throws as a backup was 96.1, seventh best in the league. Bradford has a rating of 69.2 on that type of pass this year, good for 25th in the NFL. 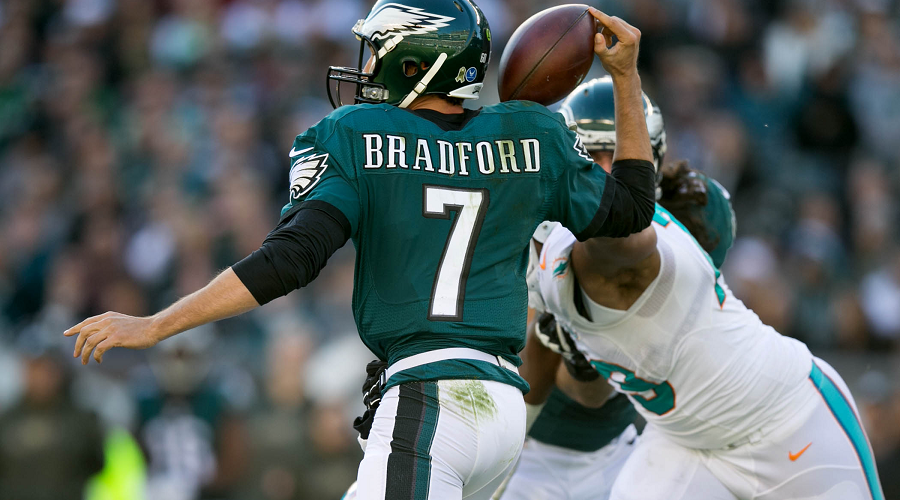 If the Eagles could send more balls down the field, the rest of their team offense would likely improve. Against Miami, the Eagles had 36 carries for 83 yards. Ryan Mathews and DeMarco Murray had no lanes in which to run. The third-and-long situations came often, and defensive end Olivier Vernon had six quarterback knockdowns of his own. All told, the Dolphins sacked Eagle quarterbacks four times and knocked them down 10 more times.If the running game can get established, the pass rush is not going to be as intense. If the pass rush slows down, that gives Sanchez time to complete passes downfield instead of having to dump the ball off to emergency outlets. Bradford has not had the ability to make those passes count. Now that Sanchez is under center, though, the team could see some improvement in that area – and Bradford’s time on the bench could actually help the team
Older post
Newer post