NFL News and Rumors
The Atlanta Falcons and New Orleans Saints will both be playing for pride when they square off in their season-ending Week 17 NFC South divisional matchup on Sunday, January 3, at 1:00 PM ET, live from the Georgia Dome in Atlanta. Both teams got impressive wins the last time out and would like to head into the offseason with a positive vibe by getting the ‘W’ in this pairing of longtime division rivals. Now, let’s find out who will win and cash in.

The Falcons are a 4-point favorite to beat the underdog Saints on NFL Week 17 betting lines while the game’s total sits at 53. Atlanta is a -210 pick against the Moneyline while the Saints sit at +175.

Why Bet The New Orleans Saints Odds at +4

Because they’ve got Drew Brees on their roster!

The Saints have had a rough season, but they’ve won two of their last three games including their 38-27 win over Jacksonville last weekend.

The Saints got a fantastic performance out of future Hall of Fame quarterback Drew Brees despite the veteran being quite banged-up with a torn plantar fascia. The cerebral signal-caller threw for 412 yards and three touchdowns to lead New Orleans to the convincing win.

“That’s classic Drew, man,” Saints guard Jahri Evans said. “He holds all those records for a reason. He can still sling it. That’s what he said he was going to do, and that’s what he did.”

With Brees completing 67.7 percent of his passes with 31 touchdowns and 11 interceptions, the Saints have averaged a healthy 25.9 points per game this season. Unfortunately, New Orleans has been absolutely abysmal in giving up a whopping30.6 points per game defensively.

Why Bet The Atlanta Falcons Odds at -4

Because they have Matt Ryan and Julio Jones and are playing at home! The Atlanta Falcons have won two straight, including their impressive 20-13 win over previously unbeaten Carolina last weekend.

Thanks to their elite combination of quarterback Matt Ryan and wide receiver Julio Jones, the Falcons are looking to reach the nine-win mark, though a playoff berth is now out of the question.

Ryan and Jones hooked up nine times against the Panthers’ elite defense for 178 yards and one highlight reel score that came on a 70-yard heave from Ryan.

“It was a great play by Julio,” Ryan said. “To be able to escape the pocket and realize he’s down there with a safety and a linebacker, I feel like that’s a good chance for us to throw up a ball and give him an opportunity to make a play.”

With Ryan completing 66.3 percent of his passes with 19 touchdowns, but an uncharacteristic 15 interceptions, the Falcons average a modest 21.5 points per game. The Falcons have been solid defensively under first-year head coach Dann Quinn. Atlanta has allowed 21.7 points per game this season under Quinn, the former Seattle Seahawks defensive coordinator. 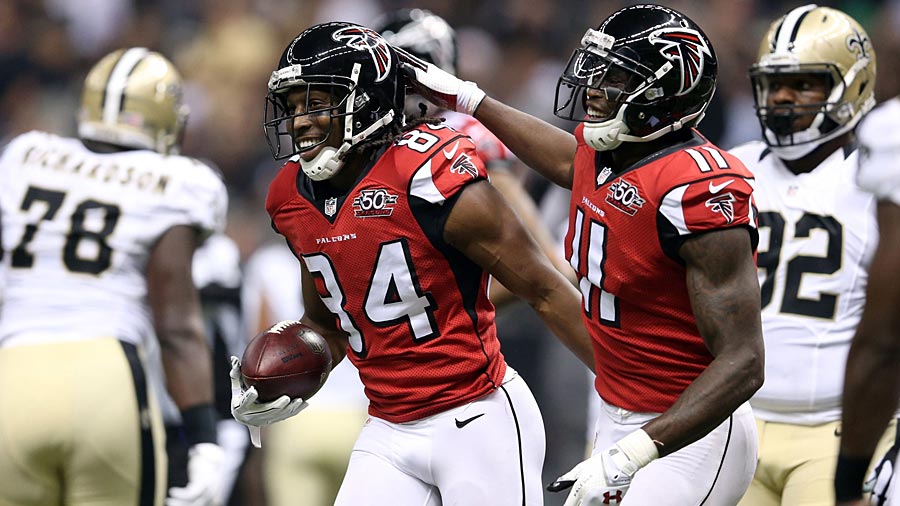 With Atlanta looking for some payback for their 31-21 road loss against New Orleans on Oct. 15, I like the Falcons to get the win and narrow ATS cover.

The home team in this rivalry is 7-1 ATS in the last eight meetings and the Saints are 2-5 ATS in their last seven road games against the Falcons.