NFL News and Rumors
Cam Newton and the Carolina Panthers have just one more test to pass when they face Peyton Manning and the stingy Denver Broncos in Super Bowl 50. After man-handling Seattle in their divisional round win two weeks ago – and beating the daylights out of a very good Arizona Cardinals team in their stunning 49-15 NFC Championship game win on Sunday, the Panthers will look to win and cash in one more time as solid favorites. “Yeah, we are going to the Super Bowl. We are not going just to take pictures,” Newton said Sunday after leading Carolina to its commanding win. “We’ve been dreaming about this moment since Day 1. Our pen has a lot more ink left. We are trying to finish this thing off.”

Who: Carolina Panthers (15-1) vs Denver Broncos (12-4)When: Sunday, February 7, 2015Kickoff: 6:30 PM ETWhere: Santa Clara, CAStadium: Levi’s StadiumSpread: Panthers -3.5Moneyline: Carolina -185 vs Denver +160Game Total: 43.5Watch: CBSStream: CBS Sports Analysis: Carolina is a decisive 4.5-point favorite to beat Denver and win upper Bowl 50 and for good reason! The Panthers have put together a ton of impressive ATS trends that make the outcome of Super Bowl 50 look like a virtual lock in my expert estimation. Carolina has won 10 straight games as a favorite of six points or less while compiling a very solid 7-3 ATS mark during the span. The Panthers are also 6-2 SU and ATS in their last eight games against teams from the AFC West.If you can get Newton and the Panthers as a 4-point favorite, you’re virtually guaranteed to bring home the bacon with Carolina going 10-0 SU and a near-perfect 9-1 ATS in their last 10 such contests. The Panthers are 4-1 ATS in their last five games against a team with a winning record, 11-4 ATS in their last 15 games overall and a consistent 9-4 ATS in their last 13 playoff games. Still, for me, it’s not even Carolina’s stellar ATS trends that leads me to believe they are a virtual look to beat the Broncos and cover the spread….it’s the incomparable play of Newton and the Panthers’ focus on finishing off their season with a Super Bowl victory.Yes, Newton finished with 335 passing yards and 47 rushing yards while throwing two TD passes and adding another two scores on the ground, but it is Newton’s newfound maturation and the rest of Carolina’s focus that has impressed me most. “We wanted to come out and play a complete game, and I think the guys up front played exceptional,” linebacker Luke Kuechly said. “There was pressure all day.” 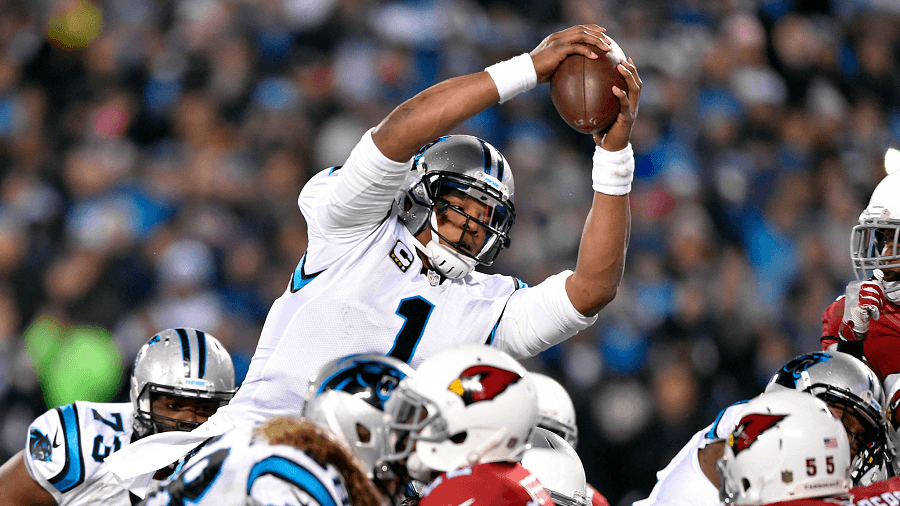 At one point, the Panthers forced the Cardinals into turnovers on three consecutive plays while basically shutting down Arizona’s second-ranked offense (30.6 ppg). Another of the main factors that I believe makes Carolina look like a great pick to cash in on their Super Bowl 50 odds is the outstanding coaching/guidance of head coach Ron Rivera. “You would like to think between our fourth, fifth, sixth season that we would get in this type of position,” Rivera said. “It is part of a vision as a coach. You want to win them all every year, but I tried to map out realistically what I thought we had to do and where we had to be. Timetable? This is about where I hoped we would be.”Last but not least, I love the Panthers’ confidence, and it all starts with Newton. “I’ve been playing football too long for me to be nervous,” Newton said. “This is why you play football. I idolized the quarterbacks who would be in these positions and just dreamed, ‘Man, I hope and I pray I get the opportunity to do it.’ You see so many different quarterbacks have their chance but yet nothing happens. Who has promised for me to be back in this position again?”
Older post
Newer post