NFL News and Rumors
The revamped Oakland Raiders and revitalized Minnesota Vikings will square off in an intriguing NFL Odds matchup on Sunday that could turn out to be the most exciting game on the entire Week 10 schedule. If you’re ready to cash in and want to know which one of these blossoming teams is going to bring home the bacon at O.co Coliseum, then let’s go!

The Vikings have won four straight games and are coming off a narrow, hard-fought 21-18 overtime win over St. Louis while narrowly covering the NFL betting line as 2-point home favorites. Minnesota was led to victory mostly because of the rushing of veteran back Adrian Peterson as the sure-fire Hall of Famer picked up 125 yards and one score on 29 carries. Young quarterback Teddy Bridgewater completed 13 of 21 passes for 144 yards with no touchdowns and one interception but suffered a concussion on a cheap shot hit by Rams defensive back Lamarcus Joyner while sliding for a first down. Joyner was penalized for unnecessary roughness/targeting for the hit, leaving Bridgewater ‘questionable’ for this Week 10 affair. Vikings coach Mike Zimmer said Monday that Bridgewater passed the first test in the concussion protocol and “should be good to go, I think.” The Vikes got the win as kicker Blair Walsh nailed a 40-yard field goal with 9:18 left in overtime after a bold decision from Zimmer. Instead of taking the ball to start overtime, Zimmer chose to take the wind at his back and the decision played out perfectly as Minnesota forced a three-and-out before their game-winning drive. “I think it shows you how smart Coach Zimmer is,” Walsh said. “It made such a difference. Nobody made or attempted a field goal or a PAT the other way. He was smart to take the wind in case we needed a long one.” “We have a long way to go, but at least we’re in the hunt,” Zimmer said. Minnesota’s defense limited sensational Rams rookie running back Todd Gurley to 89 yards to snap his four-game streak of reaching the century mark. “We held him to under 100 yards and that was our goal,” said Vikings defensive tackle Linval Joseph. The Vikings rank 23rd in scoring (21.0 ppg) and a stellar second in points allowed (17.5 ppg).

The Raiders put up a helluva’ fight in Week 9 but ended up suffering a heartbreaking 38-35 loss against Pittsburgh as kicker Chris Boswell nailed the game-winner for Pittsburgh from 18 yards out with two seconds remaining. 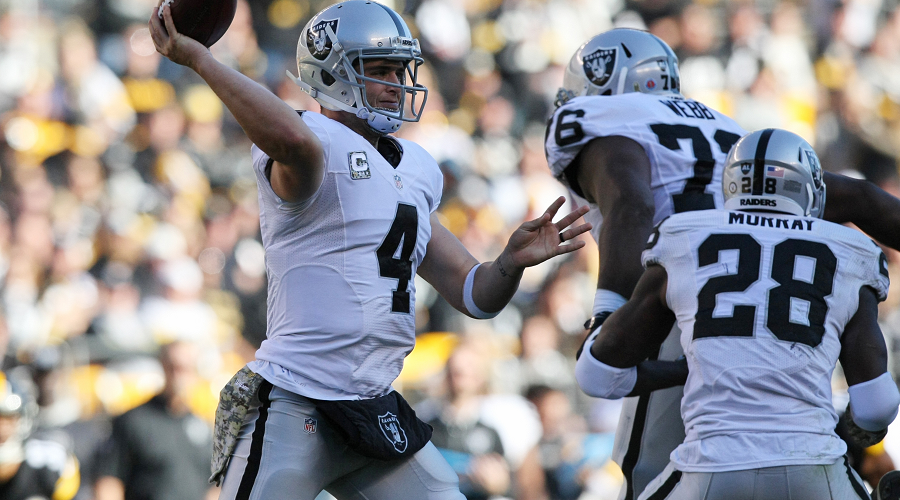 Gifted second-year quarterback Derek Carr completed 24 of 44 passes for 301 yards with four touchdowns and one interception while Michael Crabtree added two TD catches and Amari Cooper, one. “It hurts to be so close, it really does,” Carr said. “We have a great group of guys. Things started to fall apart and we just kept fighting. That’s good to see. In this league, though, you have to win football games.” Unfortunately, the Raiders also allowed Pittsburgh receiver Antonio Brown to set franchise records with 17 receptions for an insane 285 receiving yards. “All I can say is ‘wow,'” Raiders safety Charles Woodson said of Brown’s performance. The loss also snapped Oakland’s two-game winning streak and put their postseason plans in jeopardy. “We played hard. We played to the end. We made a lot of plays,” Oakland head coach Jack Del Rio said. “We have a chance there to at least get that thing into overtime and go against a backup quarterback with Big Ben out. We had a great opportunity.” Running back Latavius Murray added 96 rushing yards on 17 carries but suffered a concussion in the third quarter when he was hit by Steelers’ strong safety Mike Mitchell and fumbled. The Raiders rank seventh in scoring (26.6 ppg) and 24th in points allowed (26.4 ppg).