NFL News and Rumors
The Arizona Cardinals and the Seattle Seahawks will both be looking to get a big division win on Sunday when they square off in an intriguing Week 10 showdown at CenturyLink Field on Sunday.

The work week has wrapped up at #AZCardinals HQ. #AZvsSEA is right around the corner. @PaulCalvisi has more. https://t.co/6GEDXHQ4Qp

The Cardinals have won two straight including their convincing 34-20 over Cleveland in Week 8 while covering the NFL betting line with room to spare as a 7-point road favorite.The Cardinals overcame a 20-10 halftime deficit by scoring 24 points in the second half while shutting the Browns out.Carson Palmer completed 23 of 38 for 374 yards with four touchdowns and one interception. Palmer tossed three touchdown passes in the second half.“We had more energy in the second half,” Cardinals coach Bruce Arians said. “We had better tackling defensively. Offensively we started making plays. We had three wide-open touchdown passes in the first half we don’t normally miss.”Veteran running back Chris Johnson continued his stellar campaign by rushing for 109 yards on 30 carries while wide receiver Malcolm Floyd caught four passes for 106 yards and one score. Arizona ranks second in scoring (32.9 ppg) and seventh in points allowed (19.1 ppg).

The Seahawks have won two in a row including their narrow 13-12 win over Dallas in Week 8, although they failed to cover the spread as a 4.5-point road favorite. Russell Wilson completed 19 of 30 passes for 210 yards with one touchdown and one interception while adding 32 rushing yards on six carries while running back Marshawn Lynch added 71 yards on 21 carries.Defensively, the Seahawks limited Cowboys quarterback Matt Cassel to just 97 yards passing in the ‘ugly’ win.The victory got Seattle back to .500 for the first time in over a month.“We made it back to even,” Seattle coach Pete Carroll said. “I don’t think it feels much different than last year. It’s very similar.”Seattle was lifted to victory when veteran kicker Steven Hauschka nailed the go-ahead field goal from 24 yards out with 1:06 remaining to provide the final margin.“We are lucky that we finished the game with a win, with Steven kicking the field goal,” Wilson said. “Offensively, we were moving the ball pretty well. We had some rough plays on third down, but when we needed it we converted and made the plays on the last drive.”Wilson, who has been sacked a league-high 31 times, was sacked just once against the Cowboys.“The offensive line was phenomenal,” Wilson said. “No sacks. They really stepped up.” 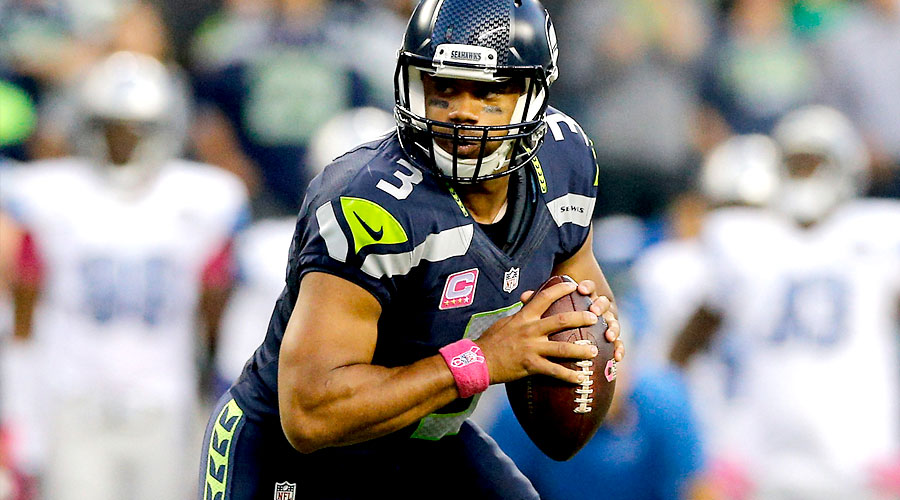 Seattle has won an insane 21 of its last 25 home games while also going 8-2 SU and 5-4-1 ATS its last 10 home games. More importantly, the Seahawks are ‘semi-desperate’ and simply won’t lose this important divisional matchup at home.Seattle has gone 7-3 SU and ATS in their last 10 home games against Arizona, including a blistering 4-1 SU and ATS over their last five against the Cards.Seattle can close their two-game gap o the division-leading Cardinals and I don’t expect them to blow this opportunity. Arizona has the more explosive offense this season, but Seattle has a very good defense that I believe is going to force Arizona quarterback Carson Palmer into at least one costly turnover.Arizona is just 1-4 ATS in their last five games following a bye week while Seattle has gone 5-1-1 ATS in their last seven games against their NFC West division rivals.Russell Wilson and Marshawn Lynch will lead Seattle to victory.