NFL News and Rumors
The Carolina Panthers and their league-best offense will be on display in Santa Clara for us to enjoy, along with the Denver Broncos and their league-best defense. As we wait for this enticing clash, here are some bold picks to whet your appetite for the Super Bowl NFL betting action.When: Sunday, February 7, 2015Kickoff: 6:30 PM ETWhere: Santa Clara, CAStadium: Levi’s StadiumSpread: Panthers -6Moneyline: Carolina -240 vs Denver +200Game Total: 45.5Watch: CBSStream: CBS Sports Listen: Carolina vs Denver

UNDER 22.5 in First Half Lines

The Panthers have witnessed fast starts in their two playoff games, and if that trend stays true, they could be on for another solid starts. However, the game-changer here is that they’ll be facing a Denver defense that has perfected the art of taking away potential scoring opportunities from opposing defenses, a key reason why they’ve allowed 20-plus points in just two of their last 10 games. This defense should be able to slow down Carolina and prevent a strong start. Meanwhile, Denver’s offense is often comfortable of sitting back and scoring opportunistic points. A good example is their second half against New England, where they constantly played it close to the vest by repeatedly punting the ball and orchestrating several running plays to salt away the game; something that is likely to be repeated this week. Added to the fact that Super Bowls typically start very slow and only light up towards the end, an UNDER 22.5-point total looks like the best bet here.

Whereas the Broncos squeaked their way past Pittsburgh and New England, the Panthers dominated both Seattle and Arizona, underlining their true potential as the team to beat in the playoffs. And to boost their agenda to win Super Bowl 50, Carolina enters the Big Game with the No. 1 scoring offense in the league with 32 points on .487 points per play. In addition, Carolina’s 3.8 touchdowns per game ranks first in the NFL, with Newton and his crew making the best of their opportunities count inside the red zone with a 70 percent touchdown rate inside the 20-yard line. Such explosiveness will be tough for Denver’s defense to handle throughout the game. Meanwhile, the Panthers are also strong defensively, topping the league with a +1.6 turnover margin, fueled by their league-best 2.7 takeaways per game. Against the 2015 turnover-prone version of Manning, Denver’s offense will find itself in tons of trouble, meaning the Broncos will have a tall order in their quest for a win. Added to Carolina’s solid special teams unit, the Super Bowl 50 stage looks well set for Carolina’s taking.

When the Panthers last played the Broncos in 2012, Newton was just a second-year QB at the time, and his greenness showed his game, as he threw for 241 yards and two TDs plus two interceptions. Looking at Newton right now as a fifth-year QB, his game is much more refined. His passing mechanisms are very good, showing more accuracy on slant routes and generally throwing the ball better, whether he’s facing pressure from the defense or not. Not to mention, he has developed a better understanding of the game, making him able to read and throw off defenses while connecting better with his receivers. This, plus his outstanding running ability, is the reason he had 10 running touchdowns (best among QBs) along with 35 passing TDs (second only to Brady’s 36). 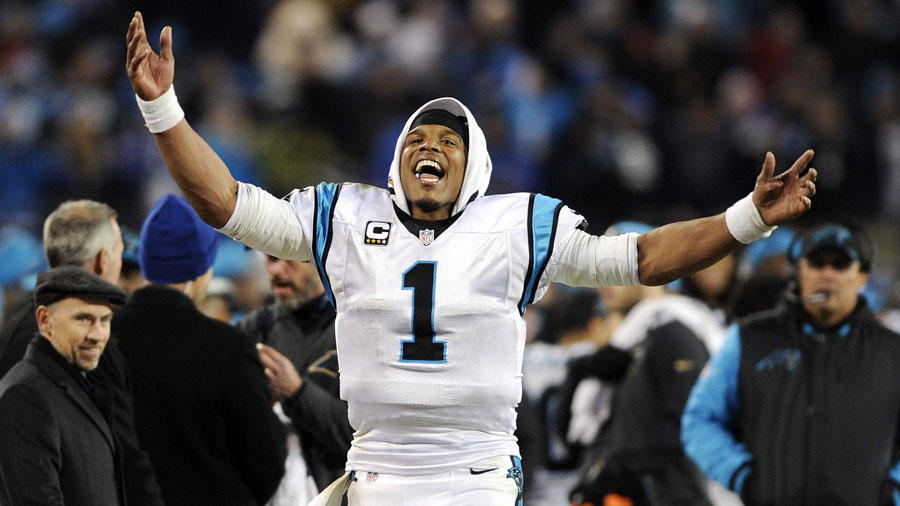 Even more commendably, Newton has completed 35 of his 50 passes in the playoffs (good for 70 percent) for 496 yards and 3 TDs in the playoffs, along with 2 rushing TDs and 50 rushing yards in the playoffs so far. This was after he finished the regular season with a pass completion percentage of 59.8 and 7.75 yards per pass attempt.Bearing such numbers in mind, and taking into account his clutch performance against the top-5 ranked defenses of Seattle and Arizona, Newton should be able to complete more than 60 percent of his passes against Denver. And as far as TDs are concerned, his improved QB play and efficiency is highly likely to allow him to better the two-touchdown performance he gave against Denver in 2012. So, at the very least, three total touchdowns should be a possibility for Newton in this game.

Manning Will Throw for at least 3 TDs

Though Denver’s QB Peyton Manning no longer has the same skill-set of his younger days when he could easily light up the scoreboard with four TDs, he is definitely a better quarterback today than what he was a couple months ago in the regular season. From his ability to limit turnovers to veteran-like game management; Manning has turned out to be a cog in the wheel in Denver’s playoff run, summed up by his two early touchdowns against New England that proved very crucial in his team’s progress to the Super Bowl. And this being Manning’s potential last game in the NFL, you can expect him to strive to give his best of performances, possibly with two or more TDs, in the bid to earn the Broncos a Super Bowl title.

Final Game Total Will Go OVER 45.5

As per the projections above, 3 TDs from Newton and 2 TDs from Manning already accounts for around 35 points. In the meantime, we should have at least 3 total made field goals from both teams, particularly in the first half where teams tend to play conservative football. Additionally, though we expect the game to start slowly, there is a good likelihood that tons of points will poured in the second half, more so in the fourth quarter where trailing teams often mount come-back attempts. This should allow the scores to go as high as 50 points, with each of the two teams going beyond the 20-point mark, leading to an eventual OVER total. Mind you, the last three Super Bowls have all had OVER totals.
Older post
Newer post