NFL News and Rumors
If there was ever an award for playoff-contending teams that overachieved in their regular season, the Kansas City Chiefs and the Houston Texans would both be up there in wild celebrations. Unfortunately, wild card teams don’t that kind of luxury, given that the wild card playoff games always begins immediately after Week 17, so both the fourth-seeded Texans (9-7) and the fifth-seeded Chiefs (11-5) have to prepare for their AFC Wild Card matchup this weekend. This game is set to take place on Saturday, January 9th at the NRG Stadium (Houston), starting at 4:35 pm ET on ABC Television. Read on below for everything you need to know about online betting in this game’s NFL betting lines.

How to Bet on the Kansas City Chiefs vs. Houston Texans

In the early betting lines, the streaking Chiefs are placed as 3.5-point favorites over the Texans (+3.5). For the money lines, the Texans are trading at +160 while the Chiefs are sporting a –180 price. In OVER/UNDER total betting, points are set at 40. All the best in r hunting and feel free to guide your bets with the analysis prepared for you hereafter.

After six weeks of the regular season, very few would have predicted that the Chiefs would be one the celebrated teams at the end of the season. With a 1-5 record, a season-ending injury to stud running back Jamaal Charles and a five-game losing after 6, the Chiefs looked to contend for the first round pick in 2016. And then, the improbable happened, as the Chiefs got back to winning ways, and never stopped winning until the end of the regular season, rattling off 10 straight wins to finish the season with a stellar 11-5 record that was just one win short of clinching the AFC West.Still, having won a franchise-best 10 straight games, you can’t say the Chiefs will be feeling about themselves, especially because it earned them a spot in the playoffs. After all, three of the past nine teams to win 10-or-more consecutive games to end the season went on to win the Super Bowl, including the 2003 Patriots, so the Chiefs must be buoyed of belonging to that elitist club and their chances at challenging for the Super Bowl 50 odds. But in order for the Chiefs to keep those hopes alive, they will first need to take care of the equally surging Texans at home.To do so, the Chiefs will need both the offense and defense to continue humming. Essentially, this means that Alex Smith and his targets must find a way of outsmarting the disruptive J.J. Watt-led Houston defense. Luckily for the Chiefs, Smith has been able to take care of the ball admirably in their 10-game winning streak, posting an NFL-best plus-16 turnover margin. Smith has also been making good decisions, something that is affirmed by his league-low five interceptions in the 10 games. Added to the fact that Smith threw for 243 yards and three touchdowns in Kansas City’s season-opening 27-20 win at Houston, it totally makes sense that many pundits and K-City fans expect Smith to have another good outing against the Texans once again this weekend.If there’s, however, going to be a side that will truly be the determiner of Kansas City’s chances for a win, it is the ridiculously improved Chiefs defense. Throughout the season, the Chiefs have been allowing an average of just 17.9 PPG (third only to the Seahawks and Bengals in the NFL), a mark that got better to an impressive average of 12.8 PPG allowed during the 10-game streak. This solid defense has mainly been down to the services of top pass-rushers Tamba Hali and Justin Houston, meaning Houston’s QB Brian Hoyer won’t be having it easy. Pass-rushing aside, the Chiefs also boast of a lethal group of CBs. After tallying just 6 interceptions in 2014, the Chiefs collected 22 regular season interceptions this year, the second-most after the Carolina Panthers. Rookie cornerback Marcus Peters is the most notable player in this group, leading the team with eight interceptions, including two pick-sixes, something that is likely to test and Hoyer’s targets to the very extreme. 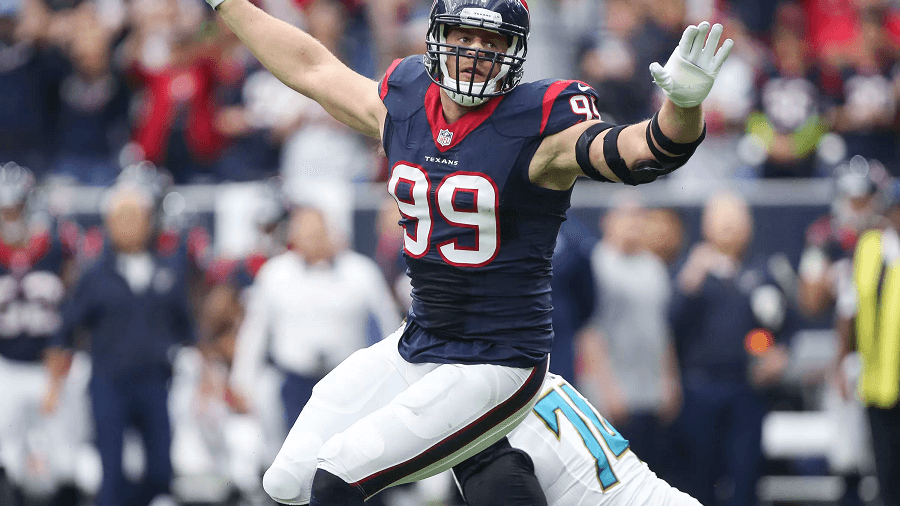 According to Hoyer, the season didn’t go exactly as he’d have wanted, especially in regards to his benching, but all is forgiven now that the Texans are where they wanted to be—clinched the AFC South title and made the playoffs for the first time since 2012. Hoyer’s numbers in his 11 games (9 starts) weren’t eye-popping (2606 passing yards, 19 TDs, 91.4 QB Rating), but they were a big reason the Texans overcame their sluggish 2-5 start to the season and went on to claim a 9-7 finish, including the important three-game winning streak they bring into this clash.However, like the Chiefs, it is Houston defense that deserves most praise for the team’s celebrated season. Led by the mercurial J.J. Watt who led the NFL with 17.5 sacks, the Texans chewed quarterbacks down the stretch, while Houston’s tightened-up secondary allowed Hoyer and Co. sufficient time to make necessary plays. In their season-finishing three-game winning stretch, the Texans never allowed more than 10 points per game, which is really impressive, considering all those three games were against divisional opponents.If the Texans can bring this defensive A-game on Saturday, Kansas City’s quarterback Smith (who has thrown three interceptions in his last two games) and his less-than stellar weapons will be in for a rough day, a tougher one than they had in Houston in Week 1.Needless to say, the Hoyer and his offense will also need to get things done on the attacking side of things. Playing good defense and conservative offense can only get you so far; if the Texans are all about winning, a cranked up offense will be required from the one-sided Houston offense that often relies on passing the ball. This will be especially important because K-City has a solid offensive backfield in Spencer Ware and Charcandrick West who are both very capable of getting the job done if Smith fails to air it out effectively.

As advertised by their résumés, both teams are in the playoffs because of their solid defenses, so you can expect a cagey scoring affair between them. That said, both teams are likely to feed into the playoff atmosphere, so they should be able to combine for enough points to push the total above 40 points, just in the same way the motivation of playing in Week 1 allowed them to go OVER the 40.5 total.Winning-wise, this game is one that could go either way, given the way both teams have played some good football down the stretch. That said, there is obviously more momentum on Andy Reid’s Chiefs team, so we are leaning on them for a tight win in a game that could go all the way to OT.My Final Predicted Score: Kansas City 25, Houston 23.
Older post
Newer post