NFL News and Rumors
J.J. Watt and the red-hot Houston Texans will look to stop Alex Smith and the incendiary Kansas City Chiefs when the two Super Bowl hopefuls square off in their NFL betting AFC Wild card showdown on Saturday, January 9,at 4:35 PM ET, live from the gridiron at NRG Stadium in Houston, Texas.

When: 4:35 PM ET, Saturday, January 9, 2016Where: NRG Stadium, Houston, TexasNFL Odds: Kansas City -3.5O/U: 40.5The AFC Wild Card Odds for this contest have the visiting Chiefs as 3.5-point favorites to beat the Texans after opening as 3-point favorites. If you want to bet the O/U the game total is sitting at 40 points after opening at 40.5. The Moneyline favors the Chiefs at -180 while you can cash in at +160 if you back the Texans. Now…Happy Hunting!

The @Chiefs have won 10 in a row. The @HoustonTexans have the #3 defense in the NFL. Saturday. #NFLPlayoffs pic.twitter.com/ppSmYTCdlB

Why Bet The Houston Texans Odds at +3.5

The are several good reasons to back Houston (9-7 SU, 9-7 ATS, 8-8 O/U) in this AFC Wild Card opener, starting with the fact that the Texans are playing at home where they’ve gone 5-3 SU and ATS this season.Another good reason to back the Texans is that they’ve got an elite defense that ranked eighth in the league in points allowed (19.6 ppg). The Texans have a flat-out, game-changing superstar in Pro Bowl defensive end J.J. Watt and a bevy of other intelligent and experienced defensive players like linebacker Brian Cushing and cornerback Jonathan Joseph among others.Last but not least, with Houston winning three straight to close out the regular season and seven of its last nine games overall, this is clearly a team that is playing its best football at just the right time! 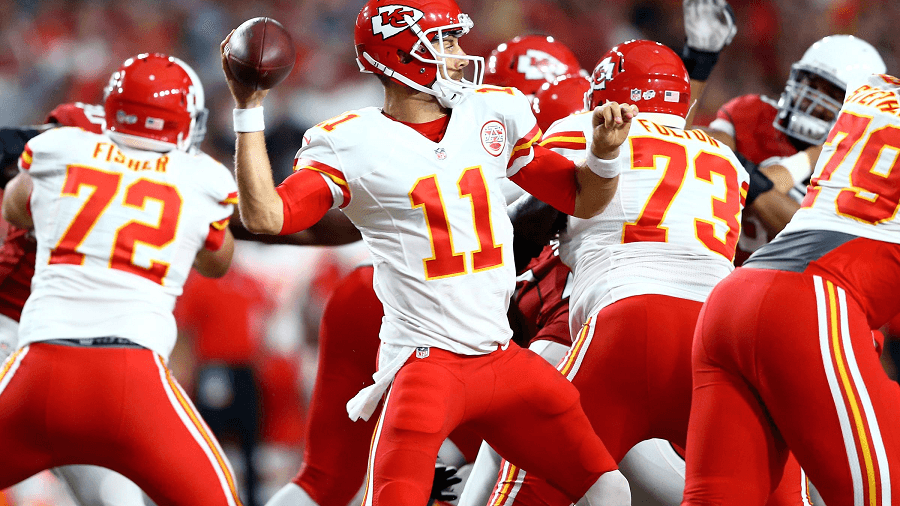 Why Bet The Kansas City Chiefs Odds at -3.5

There are a number of reasons why you should back Kansas City (11-5 SU, 8-8 ATS, 8-7-1 O/U) to bring home the bacon in this contest, starting with the fact that the Chiefs are the hottest team in all of football, having won an insane 10 straight games coming into this contest!Another great reason to back the Chiefs is that they just don’t turn the ball over very often. Kansas City ranked second in the league in turnover margin by finishing at plus-14. The Chiefs committed all of 15 turnovers this season while recording 29 takeaways.Quarterback Alex Smith had just seven interceptions all season, but has evolved into much more than a ‘game manager’. “The mindset is to execute the offense and score points,” he continued. “That’s it. That’s what we’re trying to do. I don’t care how we do it, whether it’s running or passing. I don’t care who’s scoring. It’s not about protecting the football or anything [else]. I’m trying to go out there and make good decisions.”Last but not least, the Chiefs are even better defensively than the Texans. Kansas City ranked a stellar third in points allowed during the regular season (17.9 ppg) while finishing inside the top 10 both, against the pass and run.

The Kansas City Chiefs may be playing on the road, but with a defense that is statistically better and an offense that both, averages more points per game – and one that just doesn’t turn the ball over – it’s easy to come to the conclusion that the Chiefs will win and cover the spread in this AFC Wild Card pairing.Kansas City has gone 4-0 ATS in their last four road games and a bankroll-boosting 7-3 ATS in their last 10 games overall. I know the Houston Texans are a near-perfect 4-1 ATS in their last five home games and an impressive 7-2 ATS in their last nine games overall, but they’re also just 1-4 ATS in their last five home dates against Kansas City while the favorite in this series has gone 6-1 ATS in the last seven meetings.I believe Alex Smith and the Chiefs’ offense will make more successful plays than Brian Hoyer and the Texans modest offense in order to get the win and solid ATS cover. I say go along with the 63 percent of the betting public likes Kansas City to get the win and ATS cover. In closing, let me just say that I’m stunned that 37 percent of the people like Houston despite their overachieving season.If you like betting the Over/Under total, then you should know that the Over is 4-1 in the last five meetings between these AFC rivals when they play in Houston.The Over is 5-2-1 in the Chiefs’ last eight road games and 15-7 in Houston’s last 22 games following an ATS win.My Final score prediction: Kansas City 28 Houston 17
Older post
Newer post