NFL News and Rumors
It was a weekend free from surprises in the NFL for football betting fans, as all 4 favorites made it through the Divisional Round and into the Conference Finals. That’s not to say that we didn’t have any drama, though, as all 4 games had a little something to talk about. Let’s take a brief look at how those games went down.

It was pretty much business for usual for the Patriots, as the Brady/Gronkowski connection once again paid big dividends. Gronk snagged another 2 TD passes, and Brady threw for over 300 yards in a 27-20 win. Perhaps the biggest difference maker in this game, though, was Julian Edelman, who had 10 catches for 100 yards in his first game back from injury. The game was actually more comfortable than the final score suggests, although things could have been different had the Chiefs not managed the clock so poorly in the 4th quarter.

Cardinals Win A Classic In The Desert

If you had hired a writer to come up with a script for a Divisional Game in the playoffs, he couldn’t have come up with anything wilder than what we got here. There were too many wild and wonderful plays and moments to mention here, but the Aaron Rodgers 41-yard Hail Mary pass with no time left on the game clock, and the Larry Fitzgerald 75-yard catch and run in the first play from scrimmage in OT were among the highlights. The Cardinals were probably just deserving of their 26-20 win. 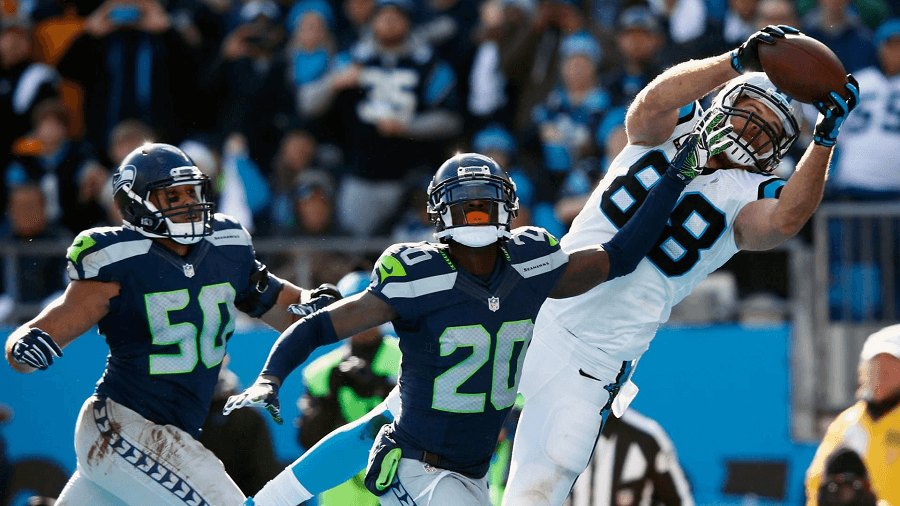 Panthers Punish Seahawks Early, and Then Battle to Hold On

This game was essentially over at half-time, as the Panthers raced out to a 31-0 lead over the Seahawks. Those of you who kept watching were treated to a bit of a nail-biter in the second half, with Seattle hitting back with 24 unanswered points. They couldn’t come all the way back, though, and the Panthers will now have a chance to extend their home winning streak to 13 games when they host the Arizona Cardinals in the NFC Conference Championship Game on Sunday.

This game looked like a total lock given how battered and bruised the Steelers were coming into it, but it almost yielded the shock result of the weekend. The game turned on a Fitzgerald Toussaint fumble in the 4th quarter when the Steelers were driving and looking to extend their lead. That seemed to give a lethargic looking Broncos team the boost they needed, and they never really looked back after that, running out eventual 23-16 winners. They will now host the New England Patriots in the AFC Championship Game this coming Sunday.
Older post
Newer post