NCAA Football Betting News
The shifty nature of the 2015-16 NCAAF odds have repetitively provided bettors with plenty of reminders of just how difficult it is to stay in the top-25 of the national rankings. With the race for the college football playoff getting tighter as we head down the final stretch of the regular season, the pressure is even greater for the top football programs to kill or be killed, raising the stakes in the online betting lines.Week 10, as you’d expect, won’t be any different, and in readiness for all the college football betting action of the weekend,  we’ve decided to take a quick look at some of the top games, offering our free NCAA Football picks and expertly predictions to help guide your betting.

.@Andy_Staples answers your questions about the playoff rankings, like why is Bama No. 4? https://t.co/QjfbheGo0X pic.twitter.com/FHGESGCFFx

Though these two teams are unranked, their clash will have a major implication on the SEC East standings, hence making their showdown worthy of your time. On one hand, Georgia’s season has been derailed by some key injuries (including Nick Chubb), making it hard to trust their competitiveness against the well-organized Kentucky D-line. On the flipside, the Wildcats have struggled to get solid production from their offense, so Georgia’s offense (which is littered with some useful pieces) could cause havoc. This game could thus go either way. That said, beating Georgia at home has never been easy, whether or not Georgia is in good form, so a victory by the Bulldogs is our prediction. Pick: Georgia.

Whether or not this is a top game is open to debate, but given the fact that the Tigers have won the last two SEC East titles while the Bulldogs still figure as a force in the SEC (and are led by a Heisman-contending QB) makes it a watchable Thursday night game. And speaking of watchable, expect Missouri’s offense to struggle mightily, with the Bulldogs also finding it hard to penetrate the Tigers’ decent defense. But in the end, Mississippi will most likely play well-enough to escape with a win in a low-scoring/averagely-scoring game. Pick: Mississippi.

Deshaun Watson and the Clemson have been the real deal throughout the season, and they will be able to prove their doubters wrong with a quality double-digit win over the iffy Seminoles, who were recently outclassed by the struggling Yellow Jackets. Pick: Clemson. 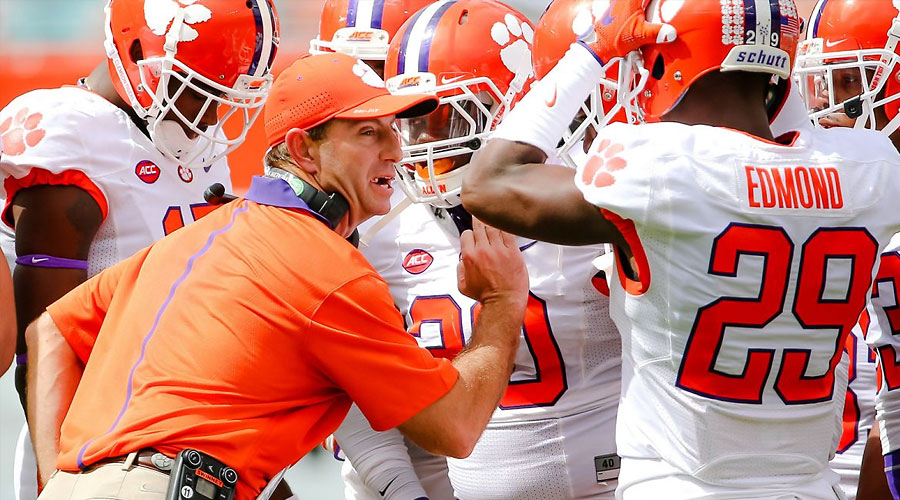 Since losing to Alabama, the crestfallen Razorbacks have been on the end of some really brutal losses, albeit giving a good account of themselves. You can therefore be sure that they’ll want to take this winnable game against the Rebels seriously, hoping to use the same tactics that have were exploited by the likes of Memphis to beat Ole Miss. Standing in their way will, of course, be Mississippi’s stingy defense, painting a grim picture for the visitors. An upset will be possible, no doubt, but going by our assessments, we believe the Rebels will hold tight for a narrow home win. Pick: Ole Miss.

TCU, led by Heisman favorite QB Trevone Boykin, has been a greatly improved team over the last two seasons, using the team’s explosive offense to get out of any defensive holes they may dig themselves into. Against OSU’s equally good offense, this game will be very tough for the visiting Frogs. However, Boykin and targets have proved worth their salt countlessly, which should be enough for them to be trusted to deliver a hard-earned win over Mike Gundy’s unit. Pick: TCU.

After the college football playoff committee contentiously ranked the one-loss Crimson Tide above the undefeated Baylor, TCU, Michigan State, and the “lowly duo” of Iowa and Memphis this week, you can be sure that these fanbases will be cheering for LSU to get the win here. Given the explosive nature of Alabama’s solid secondary, paced by defense stars in Minkah Fitzpatrick and Eddie Jackson, it’s hard to say with surety that LSU will stand tall in this game. Even so, we strongly believe that Leonard Fournette will better Derrick Henry in their running back duel, allowing LSU to deliver a statement upset win that will yank the Tide out of the playoff picture, much to the delight of Bama haters. Pick: LSU.