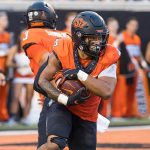 Oklahoma State outlasted rival Oklahoma while Baylor ended their regular season beating Texas Tech, setting up what promises to be one of the most competitive college football championships of the season on Friday. Check out NCAA Football odds, analysis, and a free pick for the Big 12 title game between the Cowboys and the Bears.

How to Bet on the College Football National Championship : The College Football Playoff began in 2014 and is a four-team postseason tournament for NCAA FBS schools. A playoff committee selects four schools to compete in semifinals with the winners meeting in the title game. All three of the games are played on neutral fields and the venues are rotated on an annual basis.

Oklahoma State outlasted rival Oklahoma while Baylor ended their regular season beating Texas Tech, setting up what promises to be one of the most competitive college football championships of the season on Friday. Check out NCAA Football odds, analysis, and a free pick for the Big 12 title game between the Cowboys and the Bears.

Why bet on Baylor versus Oklahoma State?

Baylor’s defense and rushing attack have dominated opponents this season. The Bears average close to 228 yards per game on the ground. The defense allows less than 20 points per game. Also, backup QB Ben Shapen has filled in admirably for starter Gerry Bohannon. Shapen, a top MLB prospect, completed 20-of-34 for 254 yards and a couple of TDs in the win over Texas Tech.

Why bet on Oklahoma State versus Baylor?

Save for a 3-point loss at Iowa State, the Pokes have dominated their Big 12 opponents. Oklahoma State not only beat Texas, Oklahoma, and Texas Tech, but they also put a 10-point beating onto Baylor earlier in the season. The Pokes know they’ve got a real shot to grab a College Football Playoff spot. Mike Gundy’s team won’t let the chance slip through their fingers.

Both Michigan in the Big Ten Championship and Alabama in the SEC Championship are vulnerable. Bama must beat #1 Georgia to keep their playoff hopes alive. Michigan must beat a solid Iowa team a week after dominating their biggest rival.

Should either squad falter, the Cowboys would jump into the top four. But first things first. The only way for Oklahoma State to make it to the CFP is to beat rival Baylor.

Will they? On paper, Oklahoma State is the much better team. Baylor’s pattern, though, is to follow up mediocre performances with solid ones.

After losing to TCU, the Bears bounced back with an upset victory over Oklahoma. Baylor barely hung on against Texas Tech. If their pattern holds, they’ll play great on Saturday.

However, there’s a caveat. As of the Wednesday before the Big 12 Championship, quarterback Gerry Bohannon is listed as day-to-day. Shapen has played well, but it’s a big ask to beat Oklahoma State’s excellent defense.

Baylor can only win this if Bohannon is one-hundred percent and even if he plays, it’s doubtful he will be at his best. The spread is more than fair. Oklahoma State grabs the cover victory and then crosses their fingers that Alabama or Michigan loses.

Posted: Wednesday, December 1, 2021 5:40, EST
Oklahoma State outlasted rival Oklahoma while Baylor ended their regular season beating Texas Tech, setting up what promises to be one of the most competitive college football championships of the season on Friday. Check out NCAA Football odds, analysis, and a free pick for the Big 12 title game between the Cowboys and the Bears. NCAA Football – Baylor Bears Read More

Posted: Wednesday, December 1, 2021 12:53, EST
After a wild weekend of college football action, the regular season has come to an end. This Saturday will be Championship Saturday, as the top conferences will hold their Championship games. After last week’s games, the new AP Top 25 Poll has been released. Let’s take a look at the top teams and what they need to do to make Read More

Posted: Tuesday, November 30, 2021 2:24, EST
There is perhaps nothing worse than having a season that takes you to a championship game, only to see all your good work undone by losing in the big game. That, though, is what is going to happen this weekend, as the NCAA has the Conference Championship Games all lined up and ready to go. While all these games are Read More

Posted: Tuesday, November 30, 2021 1:09, EST
The regular season is in the books in college football, but we are all still waiting to see which 4 teams will be heading into the playoffs. That will all be decided this weekend after we see the outcomes of the Conference Championship Games, after which the Playoff Committee will make their final decision on Sunday night. Given what has Read More

Posted: Monday, November 29, 2021 10:22, EST
With a few exceptions, FBS college football action for Week 14 is restricted to conference championship games, several of which having a direct impact on the College Football Playoff (CFP). Let’s take a closer look at some the upcoming Conference Championship games so you can place your bets against the College Football odds. NCAA Football: Expert Predictions for Conference Championship Read More

Posted: Monday, November 29, 2021 9:18, EST
The 2021 college football regular season comes to an end this weekend with all of the conference championship games and one regular-season makeup between USC and California. We will preview the title game from Conference USA, the Pac-12 and Mountain West later this week. Here’s a quick look at two others with NCAAF college football parlay picks. #8 Baylor vs. Read More

Posted: Friday, November 26, 2021 3:57, EST
It is the biggest week in college football for a couple of different reasons. Week 13 is better known as Rivalry Week, where we see teams who legitimately do no like one another go head-to-head. As big as that is, it pales in comparison to the battles for spots in the Conference Championship Games and the playoffs. Of course, we Read More

Posted: Friday, November 26, 2021 12:49, EST
One of the most heated rivalries in college football happens in prime time on Saturday when the #7 Oklahoma State Cowboys host the #10 Oklahoma Sooners. The Cowboys believe they deserves a College Football Playoff spot while the Sooners hope to play their way into a New Year’s Bowl game. Check out NCAA Football odds, analysis, and a free pick Read More

Posted: Thursday, November 25, 2021 4:26, EST
Thanksgiving week is always very special for the college football fans in the state of Alabama. Families get together to celebrate Thanksgiving, but there could also be some families who have a few differences during the week because of their college football allegiances. It’s Iron Bowl week, and the big game is always the talk of the state of Alabama Read More