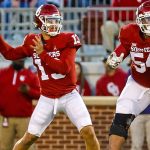 Caleb Miller and Oklahoma search for another win when the Sooners head to David Booth Kansas Memorial Stadium in Lawrence to take on the 1-5 Kansas Jayhawks. The Jayhawks have no shot of beating Oklahoma straight up. But the spread is 38 points. Can Kansas play well enough to cover? Or will Miller and Sooners roll to an ATS victory? Keep reading for NCAAF odds, analysis, and a free pick for Oklahoma versus Kansas.

The College Football Playoff began in 2014 and is a four-team postseason tournament for NCAA FBS schools. A playoff committee selects four schools to compete in semifinals with the winners meeting in the title game. All three of the games are played on neutral fields and the venues are rotated on an annual basis.

The 2021-2022 NCAAF Season kicks off on August 28. Because the season is just about here, we thought it a good idea to get down to brass tacks. Which College Football Championship favorites look primed for a win? What teams are smart plays to take the title, and which underdogs look like the best teams to back? Check out more info on the favorites, smart plays, and underdogs to win the 2022 Championship along with their NCAAF National Championship odds.

The Crimson Tide offer the lowest odds to win the title. Nick Saban’s squad, like in most seasons, is loaded on paper. But there are question marks. Will Bill O’Brien run as effective of an offense as Steve Sarkisian? Is Bryce Young as good of a quarterback as Mac Jones? Dive into the Alabama pool if you wish. But do your homework first.

Like Alabama, on paper at least, the Clemson Tigers look like a lock to make it to the College Football Playoff. But also like the Crimson Tide, questions surround the Tigers. Clemson must play a full season with DJ Uagalelei at quarterback. Not only that, but opponents torched Clemson’s defense last season.

The D must improve this season or Clemson will lose their game on Sep. 4 against Georgia and won’t beat North Carolina in the ACC Championship.

If you’re looking for value, look no further than Kirby Smart’s bunch. The Georgia Bulldogs should easily win the SEC East Division, making it a foregone conclusion that UGA battles Alabama in the SEC Championship.

If the Dawgs beat Clemson on Sep. 4, they climb into the Top 3. Even if Georgia loses the SEC title game to Alabama, they’d still garner a CFP bid. But although Alabama is likely to be the favorite, Smart’s team can beat Saban’s squad. Georgia is a solid play to win the title.

We considered making Oklahoma smart play. After some thought, though, it made no sense to peg Oklahoma a smart play when we knew Iowa State was our top underdog play to win the College Football Playoff.

This should be the season the Cyclones become the best team in the Big 12. Senior QB Brock Purdy and junior RB Breece Hall are on the short-list to win the Heisman. The defense is loaded with upperclassmen. The offensive line should be one of the best in the nation.

Don’t be surprised if Iowa State loses 1 game max, wins the Big 12 Championship, and enters the CFP with a real shot to win the title.

Either you like Clemson to continue their ACC dominance or you take a stand and back the Tar Heels to beat the Tigers in the ACC Championship. There are a lot of reasons to side with the Heels.

Sam Howell returning to play quarterback is the first reason. Howell was great in 2020. Sam is now a junior. He’s got plenty of talent around him and plays behind a stacked offensive line.

Mac Brown has recruited a top defense. Graduate outside linebacker Toman Fox is a projected early round NFL draft pick. Juniors, seniors, and talented sophomores make up the rest of the D.

North Carolina has a real chance to go undefeated during the regular season. If the Heels can pull off the upset over Dabo Swinney’s team in the ACC Championship, Brown and UNC would end up in the College Football Playoff, giving them a big chance to win the trophy.

Posted: Wednesday, August 18, 2021 8:46, EDT
The 2021-2022 NCAAF Season kicks off on August 28. Because the season is just about here, we thought it a good idea to get down to brass tacks. Which College Football Championship favorites look primed for a win? What teams are smart plays to take the title, and which underdogs look like the best teams to back? Check out more Read More

Posted: Monday, January 4, 2021 7:45, EST
Alabama and Ohio State took care of business. On January 1, the Crimson Tide beat the Notre Dame Fighting Irish while the Ohio State Buckeyes pummeled the Clemson Tigers. Check out an early odds analysis of the championship game so you can get all ready to make your bets against their CFP National Championship odds.  Early Week Analysis for 2021 Read More

Posted: Tuesday, January 14, 2020 10:16, EST
The 2020 college football national championship may have just concluded with LSU winning Monday night’s huge title tilt against the formerly reigning national champion Clemson Tigers, but thanks to the release of the odds to win next season’s 2021 national championship, you could already make a potentially winning wager – or three – on a handful of next year’s CFP Read More

Posted: Monday, January 6, 2020 3:59, EST
Monday, January 6 will see the current bowl season come to a close, with the only game left on the college football calendar being the National Championship Game. We have another week to wait before that one rolls around, but the hope is that it will be a fitting wend to what has been a fantastic season of football. Time Read More

How to Bet the 2020 College Football Championship Game

Posted: Monday, January 6, 2020 2:35, EST
There are certain sporting events that we all choose to wager on, even if it’s a sport that we do not bet regularly. The Super Bowl and the Kentucky Derby are two of the biggest in that regard, while the soccer World Cup every 4 years may be the biggest of them all. Another game that always gets a ton Read More

Posted: Monday, January 6, 2020 1:15, EST
The defending national champion Clemson Tigers will be looking to finish with consecutive unbeaten seasons when they take on Heisman Trophy-winning quarterback Joe Burrow and the LSU Tigers in the 2020 College Football Playoff National Championship on Monday, January 13 at 8:00 PM ET, live from Levi’s Stadium in Santa Clara, CA. Despite being solid 5.5-point underdogs in this year’s Read More

Posted: Monday, June 3, 2019 6:20, EDT
With the start of the 2019 college football season getting closer by the day, collegiate gridiron betting buffs everywhere need to know who oddsmakers are expecting to have the best chances to win next season’s national championship.  Will it be defending champion and prohibitive favorite Clemson going back-to-back or will Nick Saban get his perennially-powerful Alabama Crimson Tide back to Read More