NFL News and Rumors
The Carolina Panthers are the NFL’s last unbeaten team. When C.J. Anderson of the Denver Broncos galloped for a 48-yard touchdown in overtime on Sunday night, the New England Patriots saw their NFL odds unbeaten campaign come to an end. Carolina had already whipped the Dallas Cowboys on Thanksgiving Day.

So this is already the best Panthers team ever. There’s nothing to suggest that their start is a fluke – it’s very difficult to go 11-0. But should you bet on the Panthers to run the table – and are they the greatest 11-0 team ever?First, let’s look at their schedule the rest of the season. Thanks to the fact that they have five more NFC South games to play, their chances are actually pretty good. Their season ends this way: at New Orleans, Atlanta, at the Giants, at Atlanta and Tampa Bay. The Giants are probably the biggest wild card in the bunch, because you never know if you’re going to get the good Giants or the awful Giants. The other teams are either a dumpster fire (see: Atlanta and New Orleans) or too young to keep up with the Panthers (Tampa Bay). So unless you are worried about the law of averages (they are only the 12th team in the Super Bowl era to jump out to an 11-0 start), then that’s a bet I would make. The competition the rest of the way is simply too putrid not to throw that money down.Now, how great are the Panthers historically speaking? They are winning games by an average of 11.5 points per contest, which ranks them #10 of those 12 11-0 teams, with just the 2009 Colts and the 1969 Rams winning by fewer points. The Panthers have also gained these victories against a schedule that only ranks #31 (of 32) in the NFL this year in terms of difficulty. Their only two above-average opponents this season have been Seattle (again, a wildly inconsistent crew) and Green Bay (who has also lost AT HOME to Detroit and Chicago so far). 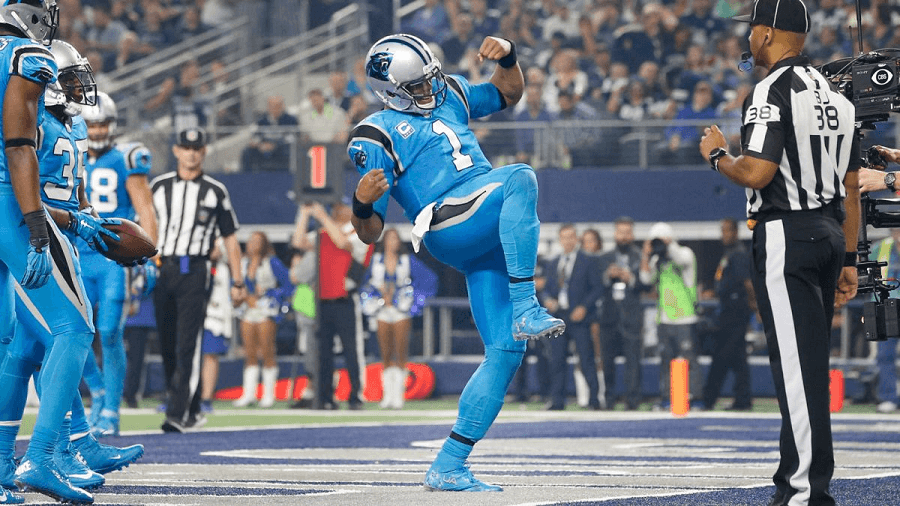 But what about their stellar quarterback? Cam Newton is more of a charismatic player than a statistically dominant one. He ranks #20 out of 31 qualified quarterbacks using the Total Quarterback Rating that ESPN calculates. QBR takes his rushing ability into account, which means that he probably should be much higher on this list than he is, given that he runs so well. So you can’t thank the quarterback for the great season. Offensively, this is a team that resembles the 1985 Bears, a team that also had a quarterback who wasn’t really a standout in Jim McMahon. McMahon was a solid passer, as Newton is, and the Bears had Walter Payton and a solid running attack. The rules were different back then, so an aerial attack wasn’t as important then. The Panthers’ defense is pretty good, but it’s not anything like that 46 defense that the Bears had that year.So how do you explain the Panthers’ success? Newton has an uncanny ability to complete deep passes (20+ yards through the air). He ranks #7 in the NFL in QBR for passes that go that far. However, this is a team that wins ugly – but it continues to win. The playoffs should be interesting.
Older post
Newer post