NFL News and Rumors
In arguably the biggest game of Week 17 NFL odds betting, the Minnesota Vikings (10-5) will be squaring it off against the Green Bay Packers (10-5) in a pivotal in-division encounter slated for Sunday, January 3rd. Both teams have already clinched playoff berths, but the NFC North title is still up for grabs, making this primetime clash an all-important showdown. For your viewing purposes, note that this marquee face-off will be played at the Lambeau Field, Green Bay starting at 8:30 PM ET, with NBC doing the TV broadcast. Read on below for our succinct preview of this highly-anticipated matchup.

In our early NFL betting lines, the Packers are placed as 3.5-point home favorites. For Money Line betting enthusiasts, note that the Vikings are trading at -120 while Green Bay sports an EV value. And if you are all about total betting, the OVER/UNDER number is set at 45.5. Let’s get down to business and find where the best value is.

When you still have to wait another day for #MINvsGB pic.twitter.com/W3lC591Y5h

Thanks to a strong performance from their running backs and a vintage display from their defense, the Vikings easily cruised to huge 49-17 win over the Giants, a victory that clinched a playoff spot for the team for the first time since 2012. Minnesota’s star running back and NFL’s leading rusher entering Week 17, Adrian Peterson, was the star of the show, as he posted 104 yards on 22 carries and a touchdowns (in three quarters), though Jerick McKinnon and his fellow runners were equally important en route to the 218 yards rushing posted against the Giants.QB Teddy Bridgewater was not lights out, going just 15-of-25 for 168 yards, but that didn’t matter as the defense intercepted Eli Manning three times and sacked him four times. That said, Bridgewater may need to get his game up after the Packers chocked Peterson and his fellow runners in their first meeting in Minnesota, a 30-13 loss to Green Bay, meaning the Packers may want to use that formula again. Meanwhile, Minnesota’s defense was back at full strength last week, thanks to the return of nose tackle Linval Joseph, safety Harrison Smith and linebacker Anthony Barr, must also be ready to step up against the can-be dangerous Packers offense. 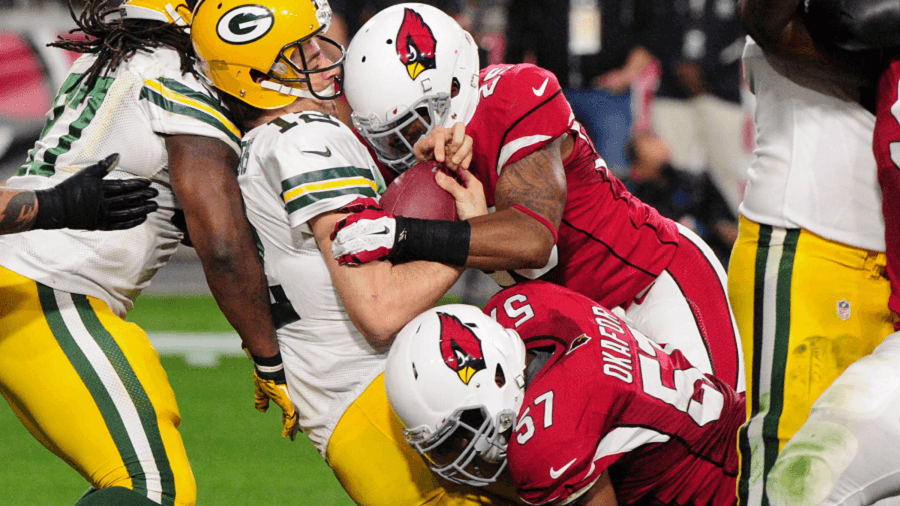 Yes, the Packers’ 38-8 loss to the Arizona Cardinals in Week 17 was as bad as it looks, but we all know that things could have been slightly better if Green Bay’s O-line was healthier. With Bryan Bulaga out of Sunday’s game with an ankle injury, and the team’s backup tackles struggling in their roles, it doesn’t figure like Green Bay will be having it much easier against Minnesota’s defense that is a considerable upgrade to Arizona’s.Despite all that, the Packers can take comfort in the fact that their team has a stellar 8-1-1 (7-3 ATS) in the last 10 meetings against Minnesota at the Lambeau. So although Minnesota has been terrific in their recent road games; Green Bay could rally on its home support to claim a win. Not to mention, Green Bay suffocated Bridgewater in their first meeting this season in Week 11 (by sacking him six times) and AP was held to just 49 rushing yards, something the Packers could use to their advantage once again.

Given the way Minnesota is often content with slowing the game down and relying on its solid ground game and defense to eke out wins, Green Bay’s QB Aaron Rodgers and his banged up aerial offense could be in for another rough night. Added to the way Minnesota has been impressive in its recent road games (6-0 ATS and 4-2 SU in last 6 road games), I have major reservations about trusting them here. However, if Green Bay’s running back Eddie Lacy and Co. can have a good running game here (like they did for 124 yards in Week 11 vs. Minnesota), then there’s no doubt the Packers could be worth something this Sunday.All in all, I expect this game to be close and possibly low-scoring, with the Vikings using their defense to see out a famous division-clinching win over their rivals.My Final Predicted Score: Minnesota 21, Green Bay 19.
Older post
Newer post