NCAA Football Betting News
With the 2016 College Football National Championship odds set to get underway in a mere matter of hours, college football bettors that are still scrambling for pertinent information that will help them increase their chances of cashing in, are in luck.Thanks to this fun-filled feature highlighting seven things you should know before betting on the Alabama Crimson Tide, you’re going to increase your knowledge about the Tide – and your chances of striking pay dirt – with a winning wager on tonight’s intriguing affair.Now, with that said and kickoff time quickly approaching, let’s get started.

There are 14 ways to watch the #NationalChampionship tonight. No excuses. #RollTide pic.twitter.com/CNLY7I6kNe

1. Alabama Can Still Win If Derrick Henry Gets Shut Down

You may think that, in order for Alabama to win tonight’s game and cash in as a near touchdown favorite, that Heisman Trophy-winning running back Derrick Henry would have to have a monster performance, but that’s clearly not the case judging by Alabama’s success when their elite running back gets shut down.Henry has been held to less than 100 rushing yards five times this season, including against Michigan State in the College Football Playoff Semifinal the last time out. Apparently though, it doesn’t matter how many yards Henry rushes for. Alabama managed to win all five games that Henry didn’t reach the century mark in, by an insane average of 32 points, including their 38-0 shutout win over Michigan State in the semifinal round.

With Derrick Henry being held to ‘just’ 75 yards in the Cotton Bowl against Michigan State, quarterback Jake Coker came up with arguably his best game in a Crimson Tide uniform.The senior signal-caller passed for a career-high 286 passing yards in Alabama’s emphatic 38-0 shutout over the Spartans and could be poised for another big game if Clemson puts too much focus on stopping Henry.“You shouldn’t be surprised at what he did last game because he’s got the talent to do that every week,” Alabama head coach Nick Saban said.“I doubt they’re as heavy as Michigan State was in defending the run, but we gotta see,” said Coker, who has completed an impressive 67.1 percent of his passes for 19 touchdowns and eight interceptions this season.

3. Well…There Is That Henry Fellow!

The powerful junior running back has rushed for a stunning 2,061 yards and 25 touchdowns, including a two-touchdown effort against Michigan State in the CFP semifinals.If the Clemson Tigers want to win the 2016 CFP championship, they’re going to have to find a way to slow down Alabama’s Heisman Trophy-winning running back and make the Tide more of a one-dimensional team.“Everything starts with the running game for them,” Clemson head coach Dabo Swinney said of Alabama. “If you don’t stop the run, you have zero chance. Absolutely zero.”

The Tide suffered a big loss to their passing attack with gifted wide receiver Amari Cooper moving on the NFL following last season, but Cooper’s loss was eased greatly thanks to the contributions of gifted freshman wideout Calvin Ridley.In just his first season, Ridley recorded 83 catches for 1,031 yards and seven touchdowns, including eight catches for 138 yards and two touchdowns against Michigan in the semis. If Ridley has another standout game that would put a ton of pressure on Clemson’s defense to stop both, the run and pass. 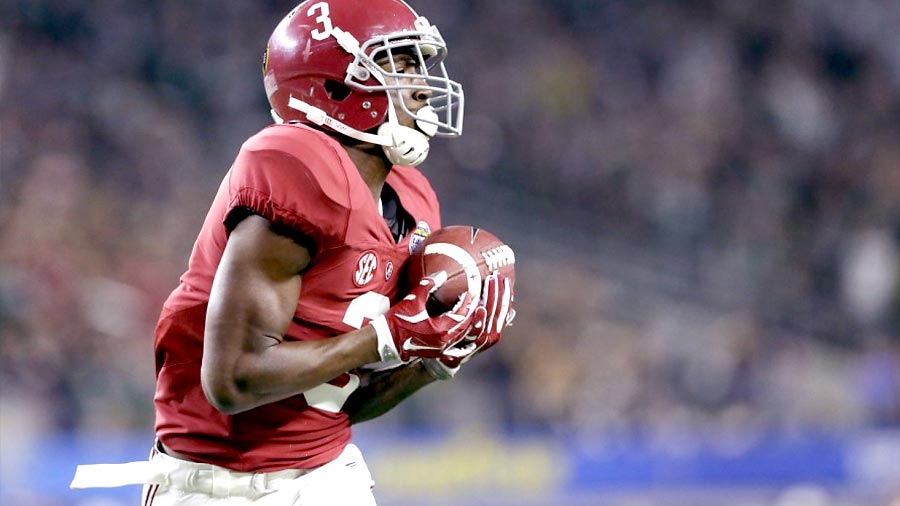 Alabama ranked second in total defense, 18th against the pass, first against the run and first in points allowed (13.4 ppg) and has not allowed more than 16 points in each of their last seven games.Clearly, the Tide are a team that can win games by simply overpowering the opposition with their stingy defense.“I mean, they’re as good as it gets,” Clemson head coach Dabo Swinney said recently. “No. 1 in about everything defensively, but the biggest thing is they just have great depth in their defensive line. They roll them guys in there, play a lot of guys, a bunch of subs, and they all play at a really, really high level. That’s why they’re a great team.”Alabama finished ninth in the nation in turnover margin (+9) by forcing 26 turnovers and committing 17. If the Tide can force Clemson into one or two costly mistakes that would go a long way toward helping them win and cash in!Alabama has not allowed a red-zone touchdown since the first quarter against Auburn over a month ago.

Alabama has compiled a perfect 4-0 ATS mark in their last four games against ACC teams while also going 7-1 ATS in their L/8 games against a team with a winning record, so there’s plenty of reasons to believe that Crimson Tide can cover the spread.Alabama is also 14-6 SU and 11-8-1 ATS in their last 20 games as a favorite of eight points or less, so the ATS trends for this contest suggest the Tide will have a great chance to cover as well.

Last but not least, recent championship game history suggests a really good chance for the Tide to bring home the bacon as decisive road favorites.Including last year’s 42-20 ‘upset’ win by ‘underdog’ Ohio State over Oregon 20, the BCS championship favorite has won an covered the spread in five of the last eight title games.The Tide have won each of their last three national championships as a favorite, including their emphatic 42-14 beatdown over Notre Dame as a 9.5-point favorite in the 2013 national championship game three years ago.
Older post
Newer post