NCAA Football Betting News
DeShaun Watson and the unbeaten Clemson Tigers will look to deliver when they take on the Alabama Crimson Tide and their stout defense in the 2016 College Football National Championship on Monday, January 11 at 8:30 PM ET, live from University of Phoenix Stadium in Glendale, Arizona. Now, let’s find out if the Tigers can bring home the bacon as near touchdown underdogs.

When: 8:30 PM ET, Monday, January 11, 2016Where: University of Phoenix Stadium, Glendale, ArizonaLine: Clemson +6.5O/U: 50.5Alabama is currently favored by 6.5 points after opening as a 7-point favorite. If you want to bet the Total, the game’s Over/Under is sitting at 50.5 after opening at 53.5. The Crimson Tide are a -245 pick against the Moneyline while the Tigers can be had as a +225 pick against the Moneyline.

Why Bet The Clemson Tigers Odds at +6.5

There are numerous reasons to back the Clemson Tigers in this affair, but none any bigger than quarterback DeShaun Watson. Clemson’s athletically-gifted dual-threat signal-caller has completed a blistering 68.2 percent of his passes for 3,699 yards with 31 touchdowns and 12 interceptions while adding a dozen rushing scores for good measure.The Tigers also have elite, if underrated, running back in Wayne Gallman. The speedy sophomore has rushed for 1,482 yards and 13 touchdowns coming into this contest, including a 150-yard, two-touchdown effort against Oklahoma in the CFP semifinals.Defensively, Clemson is really underrated. The Tigers raked sixth in the nation in total defense, ninth against the pass and 16th in points allowed (20.0 ppg). The Tigers will also likely have standout defensive tackle Shaq Lawson back on the field for this contest after the All-American suffered a sprained MCL against Oklahoma after just two snaps in the Tigers’ semifinal showdown against the Sooners. 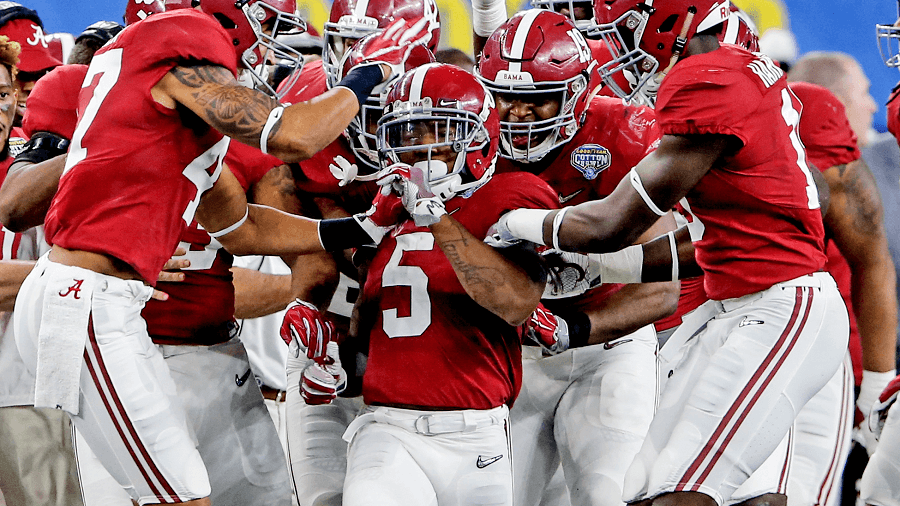 Why Bet The Alabama Crimson Tide Odds at -6.5

The first reason to back the Alabama Crimson Tide is their stupendous defense! Alabama ranked second in total defense, 18th against the pass, first against the run and first in points allowed (13.4 ppg) and has not allowed more than 16 points in each of their last seven games.Another reason the Tide look like a great wager is the powerful running of Heisman Trophy-winning running back Derrick Henry. Henry has rushed for a whopping 2,061 yards and 25 touchdowns, including a two-touchdown effort against Michigan State in the CFP semifinals.Crimson Tide quarterback Jake Coker has completed an impressive 67.1 percent of his passes for 19 touchdowns and eight interceptions and has an elite wide receiver in freshman Calvin Ridley, a gifted talent that torched the Spartans for eight catches for 138 yards and two touchdowns in the semis. For the season, Ridley has recorded 83 catches for 1,031 yards and seven touchdowns.