NCAA Football Betting News
If you think the Clemson Tigers have a great chance to win the 2016 CFP National Championship and you’re looking for reasons why you should bet on the Tigers’ NCAA Football lines to bring home the bacon, then you’re in for a treat! Thanks to this expert CFP championship breakdown, you’re going to get a handful of reasons why you should bet on Clemson to win the 2016 national championship. With that said, let’s get started.

Deshaun Watson And His Influence in NCAAF Betting Odds

Even the most ardent Alabama fan would have a hard time in denying the fact that Clemson signal-caller Deshaun Watson is a flat-out ‘beast’. Arguably the best quarterback in all of college football, Watson’s stellar play this season  was the driving force behind Clemson’s explosive sixth-ranked offense (38.4 ppg).The 6-foot-2-inch sophomore completed a blistering 68.2 percent of his passes for 3,704 yards with 31 touchdowns and 12 interceptions. However, it is Watson’s rushing ability that I believe will give the Crimson Tide fits as the elusive Tigers quarterback rushed for a stellar 1,032 yards and 12 scores.Make no mistake about it, Deshaun Watson is the kind of game-changing player that could bring the Clemson Tigers their first national championship since 1981.Alabama defensive coordinator head coach Kirby Smart spoke about Watson’s talent. The incoming Georgia head coach recruited Watson in high school.Smart said Watson is a combination of three former college quarterbacks in Nick Marshall, Johnny Manziel and Cam Newton.“It’s almost like a mixture of the three guys, with Nick Marshall as a perimeter runner,” Smart told al.com. Deshaun runs well on the perimeter. Johnny Manziel was a great athlete, create things in space. So does Deshaun Watson. This guy runs more power run game like you would say Cam Newton does.”Smart also said that Watson reminds him of Watson’s mentor, Cam Newton.“Obviously he’s not the same stature as Cam, but he runs some of the similar plays that Auburn ran with him. So the mixture of those three guys. He takes a little bit from each one because he can pass the ball. I watched this kid in high school. He is a phenomenal player. But more than that, he has the ‘it’ factor. They believe in him. That’s pretty important at that position.”

With Watson garnering the lion’s share of Clemson’s national media attention, what goes a bit unnoticed is Clemson’s stout defense.The Tigers ranked inside the top 20 in all four major defensive statistical categories by finishing sixth in total defense (302.0 ypg), ninth against the pass (177.2 ypg), 18th against the run (124.8 ypg) and 16th in points allowed (20.0 ppg).Clemson has a pair of next-level defensive ends in junior Shaq Lawson and Kevin Dodd. Lawson had a fantastic season by recording 56 tackles, a team-leading 23.5 tackles for a loss and 10.5 sacks. Dodd added 55 tackles, 18.5 tackles for a loss and nine sacks.Senior linebacker B.J. Goodson led the Tigers defense with 98  while adding 14 tackles for a loss, 5.5 sacks, two interceptions and a fumble recovery. The Tigers also have a phenomenal secondary that is headed up by All-American sophomore cornerback  MacKensie Alexander. 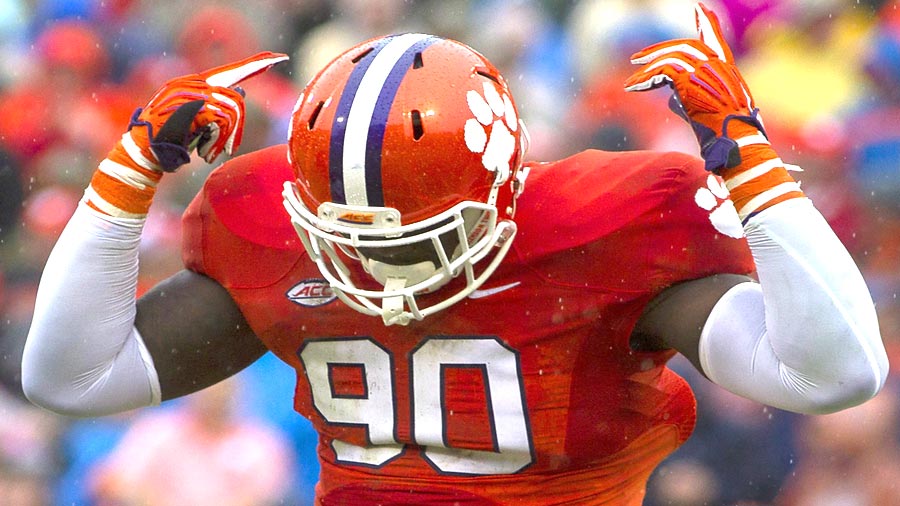 Last but certainly not least, the Tigers have a fantastic head coach in Dabo Swinney and one whose passionate, family-oriented and fun-loving ways have both, endeared him to his players and fans everywhere while giving his team a sense of ‘swagger’ that exudes confidence, but not arrogance.“He’s always been the underdog,” said former Alabama quarterback Jay Barker, one of Swinney’s teammates. “He has had to fight for everything and has never been given anything. That’s what has made him so successful. He loves being the underdog because he’s lived it his entire life.”I know Alabama’s Nick Saban is a future Hall of Fame head coach, but in my estimation, not even he can rival Swinney when it comes to being a motivator.From his dancing ways to his, us-against-the-world mantra, Swinney can motivate as well as any coach in all of college football.Prior to their CFP semifinal win over Oklahoma last week, Swinney of his team, “I told them, ‘you ain’t favored to win the damn game, but we ain’t no underdog.”That mantra worked for the Tigers the last time out and it could work again against the Crimson Tide.
Older post
Newer post