NCAA Football Betting News
The No. 1 Clemson Tigers (14-0) will play against the No. 2 Alabama Crimson Tide (13-1) in an all-important National Championship Game next Monday to decide the best team in the country. Having already taken addressed the SU and ATS picks in our previous articles, let’s take a look at what NCAAF betting enthusiasts can expect in the OVER/UNDER NCAA Football betting odds of this game that are set at 51.

Listen in to Nick Saban wired as he and the Crimson Tide prep for the National Championship. https://t.co/aAD3oK3tKM

Why the Total Will Stay UNDER 51

The Sooners entered their CFP semifinal matchup against the Tigers averaging 52.0 PPG over their last seven contests, yet by the end of the game, they were reduced to just 17 points in a convincing 37-17 win for Clemson. The manner in which Clemson’s defense showed poise in that game, especially in the second half, was nothing short of spectacular. That, of course, was not a one-time, as Dabo Swinney’s defense has been playing admirable football on that side of the ball, surrendering 20.2 PPG (good for 18th in the nation).Meanwhile, solid defense is a name that has been synonymous to Nick Saban’s Alabama throughout the season (minus that forgetful game against Ole Miss), a key reason the Tide finished the season ranked third in the nation in defense, giving up just 14.4 PPG. This defense was on full showcase in their 38-0 CFP playoff semifinal win over Michigan State. Mind you, the No. 3 Spartans had entered that game averaging over 32 PPG scoring (good for 50th in the nation in scoring offense), so shutting them out was every bit of a big deal as it looks.With these two defensive powerhouses clashing against each other on Monday, there is therefore a good case to be made that an UNDER 51 total could be in the offing. After all, majority of the teams faced by Clemson in the ACC aren’t the kind of teams you’d particularly call defensive powerhouses, so the Tigers’ offensive showcases so far must be taken with a pinch of salt.As for Bama, Jake Coker is still far from an elite QB, something that is affirmed by the fact that his 286 passing yards (on 25-of-30 passing) against Michigan State was his career-high yardage output. Take away star running back Derrick Henry and his Heisman numbers, you get a very average offense and a passing game that can be contained by Clemson’s defense, thus setting up the likelihood of a low-scoring UNDER affair.

Why the Total Will Go OVER 51

If by now you don’t know about Alabama’s Heisman winner Henry and the fact that he was the best rusher in the season, then you need to find a hole and hide in it until the Monday’s National Championship is over. Including Alabama’s semifinal game, Henry has splendidly rushed for 2,061 rushing yards and 25 touchdowns, and has been Alabama’s go-to guy in the offense this season. With Coker (67.1 percent completed passes for 19 touchdowns and eight interceptions this season) rarely being dependable in his passing game, you can expect Henry to get a lot of touches of the ball, as he’s constantly done in all of Alabama’s big games. As a note, though, Coker is coming off his best game against the Spartans, where he ran for two TDs and also threw for two TDs (both to Calvin Ridley, who’s collected 83 catches and seven touchdowns this season). The young QB could therefore be up for another big game in the offense this Monday. Plus, with Alabama’s offense decently averaging 34.4 PPG and 423.8 YPG total, the entire team should be more than capable to hold its own against Clemson’s tough-but-permeable offense. 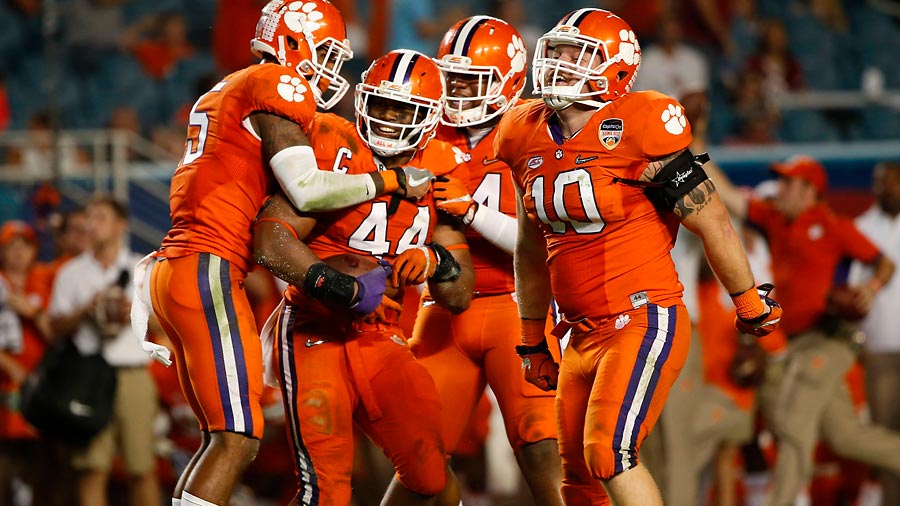 For the Tigers, their offense is pretty much the reason they are still undefeated, as Watson and his weapons always find a way of making plays. On the season, Watson has completed 68.2 percent of his passes for 31 touchdowns and 12 interceptions) while also rushing for 1,032 rushing yards and 12 touchdowns, underlining his dual-threat as a passer and runner. Artavis Scott has been Watson’s favorite target with 89 catches and six touchdowns, along with star RB Wayne Gallman, who’s been a workhorse on the ground with 1,469 rushing yards and 13 touchdowns. The talented nature of this Clemson trio, of course with solid support from the rest of the offense, is the reason the Tigers attack is remarkably averaging 38.4 PPG and 512.0 YPG total on the season. Needless to say, Alabama’s defense is capable of slowing down Clemson, but with the plethora of playmakers in Clemson’s spread offense, you can bet your last damn dollar that the Tigers will have their chance of making an offensive mark on Monday.Aside from the above-mentioned numbers, it is worth noting that the Crimson Tide have averaged 36.6 PPG scoring over their last five games while the Tigers have averaged 37.8 PPG over the same duration. In addition, the OVER 3-2 in Clemson’s last five games while the OVER is 2-3 in Alabama’s last five games. The two trends are probably not the sort of ringing endorsements you’d need to jump on the OVER bet, but when you consider the points both teams have been averaging recently in the offense, it is clear that both teams should be good for around 30 points this Monday, even if the defenses are likely to show up decently. With that, an OVER pick sounds like a smart bet here.

Final Remarks and My Total Pick

Having been as comprehensive and as open with you as possible on both teams, I trust that you’ll be able to weigh the options and pick your poison accordingly. Obviously, Alabama’s defense is the real deal, and the Tigers haven’t been too shabby either on the defensive side of the ball, meaning a low-scoring duel could be in the books. That said, both teams have been on song offensively in their recent games, and the surging play of Coker (along with the usual solid dose of Henry) plus a trustworthy Watson-led attack offers a high likelihood for a high-scoring affair. With that, I am inclined to believe that we will be in for a game where both teams will score at least 25 points apiece, so we should have more than 50 points on the board. My Pick: OVER 51.
Older post
Newer post