NCAA Football Betting News
The Connecticut Huskies and Marshall Thundering Herd will both look to pick up a season-ending NCAAF odds victory when they square off in the 2015 St. Petersburg Bowl on Saturday, December 26th at 11:00 AM ET, live from Tropicana Field. Now, let’s find out who will bring home the bacon.

When: 11:00 AM ET, Saturday, December 26, 2015Where: Tropicana Field, St. Petersburg, FloridaTV: 11 a.m. ET, ESPNNCAAF Odds: Marshall -4The Marshall Thundering Herd are 4-point favorites after opening as 4.5-point favorites while the Over/Under Total sits at 44 after opening at 43. Marshall is a -186 favorite against the NCAAF Moneyline while UConn can be had at +169. Can Marshall Right Ship to Beat Underrated UConn?

It will be @UConnFootball and Marshall in the @StPeteBowl pic.twitter.com/oIzZlGLbRy

Why Bet The Connecticut Huskies Odds at +4.5

The Huskies are a great bet because they’re underrated! The Connecticut Huskies may have closed out their regular season with a convincing 27-3 road loss against Temple, but the Huskies also shocked nationally-ranked and unbeaten Houston Cougars one week earlier to reach the six-win mark and become bowl eligible. Now, the Huskies will make their first postseason appearance since meeting Oklahoma in the Fiesta Bowl back in 2010. Unfortunately, the offensively-challenged Huskies average just 17.8 points per game while allowing 19.8 per contest defensively. The Huskies are led by their best player in dual-threat running back Arkeel Newsome who ranks 18th in the nation in all-purpose yards (1,621). Newsome finished second in receptions for UConn while quarterback Bryant Shirreffs threw for 1,992 yards while completing 60.3 percent of his passes with nine touchdowns and seven interceptions to mark the school’s best passing stats since Dan Orlovsky back in 2004. Shirreffs will be back under center for this bowl game showdown after suffering a severe concussion in his last contest. Shirreffs admitted that he lost consciousness after receiving a blow to the helmet. “It was a pretty big hit, it is probably the hardest hit I’ve taken,” the sophomore told reporters. The Huskies have an elite defender in cornerback Jamar Summers with the stealth d-back racking up an impressive seven interceptions on the season, good for third in the nation. 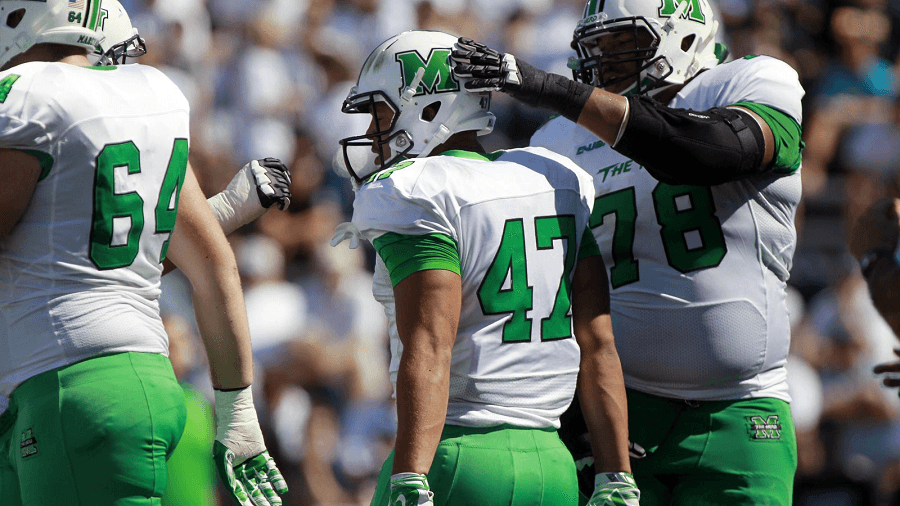 Why Bet The Marshall Thundering Herd Odds at -4.5

The Thundering Herd are the right pick because they’re the better team on both sides of the ball! Marshall only lost three games this season, but the Thundering Herd are looking to right their ship after suffering two losses over their final three games, including their season-ending 49-28 blowout loss against Western Kentucky on Nov. 27 while never coming close to covering the spread as a 12.5-point road dog. The Herd are led by freshman quarterback Chase Litton after the young signal-caller took over the starting job in the third week of the season. Litton immediately led Marshall to seven straight wins and finished the season with 2,387 passing yards, an impressive 22 touchdowns and just seven interceptions. Offensively, Marshall averages 32.6 points per contest while limiting their opponents to just 18.4 points per contest defensively to rank 14th in the nation. Running back Devon Johnson (79.29 yds/game, 5 TD) leads the rushing attack and Marshall’s aggressive defense forced a whopping 27 turnovers this season.