NCAA Football Betting News
College football betting once again gives bettors the opportunity to be big winners, as various teams take to the field in an action-packed Week 10 of the 2015-16 NCAAF Odds season. In one of the better games of the weekend, the Wisconsin Badgers and Maryland Terrapins will meet this Saturday in a Big Ten encounter. The visiting Badgers are looking to keep their good road record and maintain the five-game winning streak they bring into this game. The hosts, on the contrary, will be desperately searching for a win, having failed to record a victory in their last five attempts. Below are a few online betting insights about this game to guide your wagers this weekend.

Betting on MarylandThe Terrapins will be out there in search of the elusive first win in the Big Ten, having failed to take advantage of their last encounter, losing 15-31 to Iowa, their fifth loss on the trot. It is almost impossible to see them get into the postseason, play given that very few teams have managed to win four in a row after losing five in a row. A loss against Wisconsin will ensure that they will have nothing left to compete for, during the remainder of the season. Against Iowa, their offense continued to struggle, totaling three interceptions and a fumble to bring their total turnovers for the season to 28. Nonetheless, QB Perry Hills stood out for Maryland in that game with 100 rushing yards. This meant that he had now outrushed star backs like Ohio State’s Ezekiel Elliott, Penn State’s Saquon Barkley and Iowa’s Akrum Wadley in consecutive outings, making him the player to watch this week. Hills hasn’t been that bad in his passing game as well, completing 52.3 percent of his passes for 738 yards and seven touchdowns. However, it his interceptions on the season, 10 in total, including six picks in his last two games, that have made life difficult for him. Improvements in his passing efficiency will thus be key this Saturday if his team is to perform better. Moreover, wideouts Levern Jacobs and D.J. Moore, who have combined for 494 receiving yards and four touchdowns, and Taivon Jacobs, who has brought home 11 receptions, will need to up their game and offer more viable offensive targets. The same goes for the Maryland rushing game that is led by Brandon Ross, who has 520 yards and three touchdowns. The mega improvements will especially be vital, as they will be matching up against a scary Wisconsin defense that is allowing just 11 points and 267.1 yards per game this season. With their current form, they will need something really special to get points in this game. The Maryland defense  is manned by Jermaine Carter, Jr. who has 72 tackles, and Sean Davis who has two interceptions, along with Yannick Ngakoue brings in 10 sacks. This defense will equally have their work cut out for them, facing a Badgers offense led by QB Joel Stave, who is completing 60.8 percent of his passes for 1,974 yards, nine touchdowns against just seven interceptions.

The last time out, the Badgers had it easy against Rutgers in an emphatic 48-10 win. This game was clearly over by the second quarter where they were leading 27-3. But to ensure that Rutgers had no way back into the game, they added another 21 points in the next two quarters to give themselves a comfy win. Notably, that game marked the return of star running back Clement after missing seven games, and he did not disappoint. He ran for 115 yards on 11 carries and scored three touchdowns. 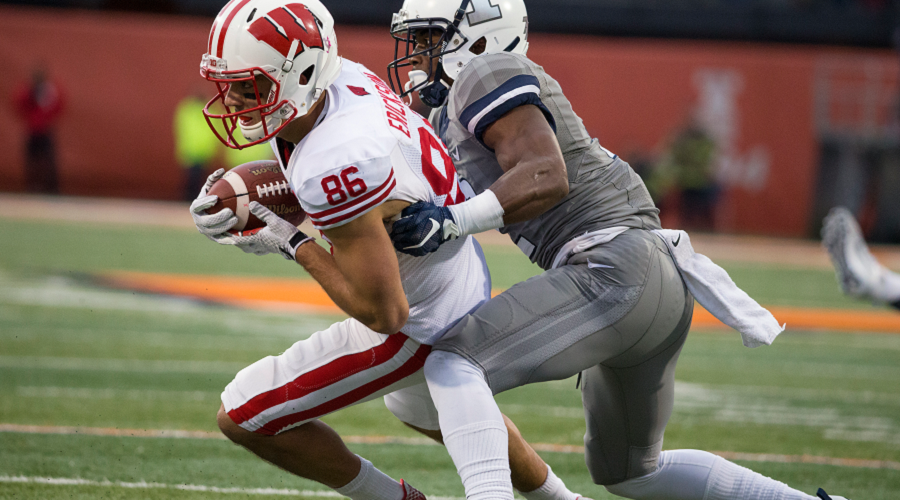 To continue their solid run, quarterback Stave will need to continue his efficiency in the offense. The presence of Alex Erickson and Robert Wheelwright, who have combined for a whopping 1,117 receiving yards and seven touchdowns, along with Dare Ogunbowale (who has  a team-best 27 receptions) should offer Stave formidable and sufficient enough options to work with. And if passing the ball is difficult, the Badgers have a serviceable ground game that is averaging 158.7 yards per contest, led by Ogunbowale with 565 yards and five touchdowns.  With such an offense, the Badgers should have an easy time against a the poor Maryland defense that is allowing 33.8 points and 425.3 yards per game. Plus, the Badgers also boast of a mean defense led by T.J. Edwards with 61 tackles. He has the backing of Tanner McEvoy (two interceptions) and Joe Schobert (9.5 sacks). Against a lackluster Maryland offense that only managed 10 points in their last game, this game could easily end in a shutout by the Badgers.

Which Are Maryland’s and Winconsin’s Main Injury Concerns?

Wisconsin looks better both in the defense and the offense. They have the quality and the form to win this one. Maryland are at home and will not take this lying down, but they lack the quality to stand against the Badgers. A comfortable win and cover of the spread should thus be in the offing for the Badgers, though with an UNDER in the total because Maryland’s offense will probably not offer much here.
Older post
Newer post