NFL News and Rumors
Week 14 of the NFL saw a few surprise results in the online NFL odds, but for most part, things went predictably well in favor of your favorite teams like Carolina, Arizona, New England, Green Bay and Cincinnati. Can the favorites do it again in Week 16, or will we have a schedule riddled with upsets? Find out as we present you with our select four-team Parlay Picks for NFL Week 16, including predictions for SU, ATS and Total Bettors.

#Redskins hope to get after Sam Bradford like they got after Tyrod Taylor. MORE: https://t.co/wdxK2EFyr4 https://t.co/fB16AjpOHj

When: Saturday, December 26th at 8:25 PM ET Odds: Philadelphia -3 What about that man Kirk Cousins? Don’t you just love the new him? I mean, against Miami, this guy was sterling in his game, completing 22-of-28 passes for 319 yards and four touchdowns for an impressive passer rating of 112.4. And it was not just in Week 15, he’s been like that down the stretch, throwing 16 touchdown passes against only three interceptions in his last eight games—a key reason the Redskins lead their division. The Eagles, meanwhile, have been blowing hot and cold, and after impressing in their ‘lucky’ win over New England, they’ve returned to their disappointing ways, culminated by their disheartening 40-17 defeat to the Arizona Cardinals on Sunday. With Sam Bradford still full of errors (he threw two costly picks vs. the Cards) and Philly’s running game barely showing any pulse, it would be a huge surprise if Chip Kelly’s Eagles flew high enough to claim the win here.Picks: Washington wins to claim both SU and ATS

When: Sunday, December 27th at 1:00 PM ET Odds: Detroit -8.5 Analysis: BLOWOUT ALERT! The 4-10 Niners have been showing some offensive pulse since Blaine Gabbert took over starting duties. In his last outing, the young QB went 30-50, for 295 YDS and 1 TD in 24-14 losing effort to the Bengals. Unfortunately for him, Detroit starting QB Mathew Stafford specializes in chewing weaker opponents for lunch, and this happens to be a 1 PM matchup, so there is a very high likelihood that the Stafford and Lions will mauling the Niners in all kinds of ways for a near-sure win and cover.Picks: Detroit dismantles San Francisco for a big win that will pay the Lions fans on both the SU and ATS lines. 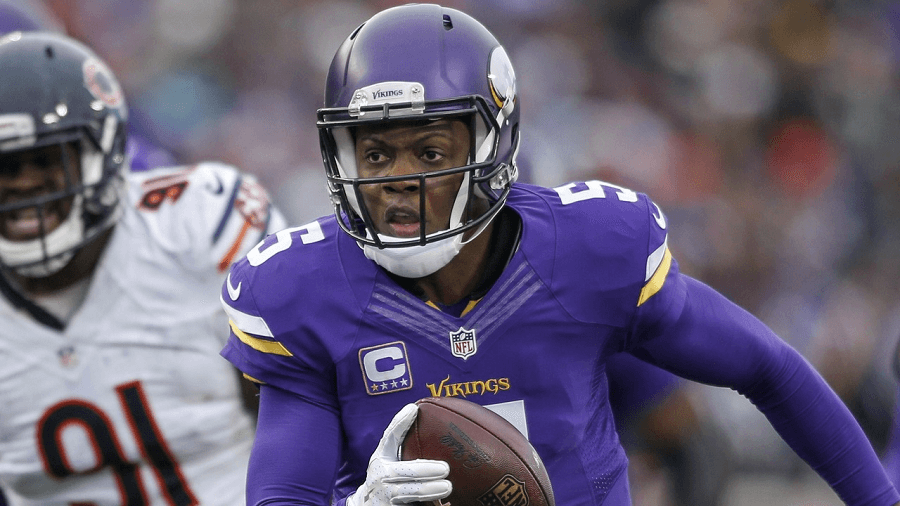 When: Sunday, December 27th at 8:30 PM ET Odds: Minnesota -4 Analysis: QB Teddy Bridgewater is proving his doubters wrong, and from the look of things, he could be up for another big show in this game against Giants. After passing for a season-high 335 yards in a spirited losing effort against Arizona, the second-year QB completed 85 percent of his passes (17-of-20) and four passing touchdowns (both new career-highs) and ran for another score to give the Vikings a morale-boosting 38-17 victory over the Chicago Bears. The Giants, meanwhile, continued their struggles with finishing the game strongly, suffering a heartbreaking three-point defeat to the Panthers after they’d erased a 28-point deficit. So although Eli Manning has thrown four TD passes in each of his last two games, and he is likely to give another good passing performance, I am leaning on the Vikes (5-2 SU and ATS at home this season) to carry the day.Pick: Minnesota wins in memorable fashion to book a place in the postseason games.

When: Sunday, December 27th at 8:30 PM ETOdds: Pittsburgh (-10.5), OVER/UNDER 47Analysis: The Pittsburgh Steelers are certainly enjoying the return of their starting QB Ben Roethlisberger to the line, evidenced by their five wins in their last six games, including a big win over the Broncos on Sunday. Big Ben continued his unstoppable partnership with Antonio Brown, completing 40-of-55 passes for 380 yards and three touchdowns on Sunday, with Brown accounting for 16 catches, 189 receiving yards and two TDs. More notably, the Steelers have scored at least 30 points in each of those last six contests, something that should allow them to take advantage of Baltimore’s porous secondary that ranks among the worst in the league in points and yards allowed per game. Meanwhile, Jimmy Clausen showed signs of a strong performer on Sunday against the Chiefs, despite delivering a losing effort, so finding spaces to exploit in Pittsburgh poor passing defense (allowing nearly 280 passing yards per game, second-worst in the entire NFL) should be possible. Considering all the above, a high-scoring game looks to be in the books, meaning bettors should be on the lookout for a good number of TDs in this game.Picks: Pittsburgh seals its place in the playoffs with a resounding 10th win, as both teams combine to deliver an OVER total.
Older post
Newer post