NFL News and Rumors
The Pittsburgh Steelers will be without starting quarterback ‘Big’ Ben Roethlisberger when they host the AFC North rival Cleveland Browns in an intriguing Week 10 division battle, but that hasn’t stopped oddsmakers from making the Steelers solid home favorites to win and cash in.Now, let’s find out if the Steelers can get the win and ATS cover with backup quarterback Landry Jones under center.

The Browns have lost four straight games and got overwhelmed in their 31-10 Week 9 loss against division rival Cincinnati while never coming close to covering the spread as 13-point road underdogs.Cleveland backup quarterback Johnny Manziel completed 15 of 33 passes for 168 yards and one touchdown but Manziel was sacked three times in the second half and the Browns were held to just 69 rushing yards in the loss while allowing Bengals’ signal-caller Andy Dalton to throw three TD passes and no interceptions.“They came out and played a lot of cover two in the second half,” said Manziel. “Things looked open a couple of times. But I could’ve gotten it down to a tight end or a running back. We had momentum going into the second half. We just didn’t do enough.”While Manziel played well in spurts, the Browns have named veteran Josh McCown the starter for this game against Pittsburgh despite the fact that there are numerous fans and browns players calling for Manziel to continue starting.“Josh McCown started the season as our No. 1 quarterback,” Browns head coach Mike Pettine said. “He’s been out due to injury and potentially is coming back. I get the call for, ‘Hey, why not (Manziel)? We’re tasked as coaches to put the roster out there that gives us the best hope to win.”The 36-year-old McCown suffered a rib injury on Nov. 1 in Cleveland’s loss to the Arizona Cardinals.“I want to wait to hear that he’s healthy in order to make it,” Pettine said. “But if he’s ready to go and able to execute the game plan and not have to change the way you call a game to protect a guy, then yeah, he will be.”The Browns are ranked a discouraging 29th in scoring (19.7 ppg) and equally unimpressive 26th in points allowed (27.4 ppg).

The Steelers picked up a thrilling 38-35 win over the Oakland Raiders in Week 9 though they failed to cover the spread as a 6-point home favorite while losing Roethlisberger to a sprained foot after being sacked with just under eight minutes remaining by Raiders’ defensive end Aldon Smith. Roethlisberger had just returned one week earlier after missing four games with a left knee injury.“You can waste a lot of time focusing on the guys who aren’t available to you,” Steelers coach Mike Tomlin said. “We’re just focused on the guys who are and how we can put together the right mix to be successful, how we can utilize their skills, how we can work to minimize their weaknesses individually and collectively. Injuries are as much of the game of football as blocking and tackling.”The Steelers got the win as kicker Chris Boswell drilled an 18-yard field goal with two seconds remaining.Roethlisberger completed 24 of 44 passes for 334 yards with two touchdowns and one interception while backup Landry Jones went 4-for-6 for 79 yards in relief of Pittsburgh’s two-time Super Bowl winning signal-caller.Steelers’ wide receiver Antonio Brown set franchise records with 17 receptions for 284 receiving yards while adding an additional 22 rushing yards on two carries.Brown’s 57-yard catch and run on a screen pass from Jones set the Steelers up for their eventual game-winning kick.“All I can say is ‘wow,'” Raiders safety Charles Woodson said of Brown’s performance.Veteran running back De’Angelo Williams rushed for a stunning 170 yards and two touchdowns on 27 carries in place of injured starter Le’Veon Bell and added 55 receiving yards on two catches. 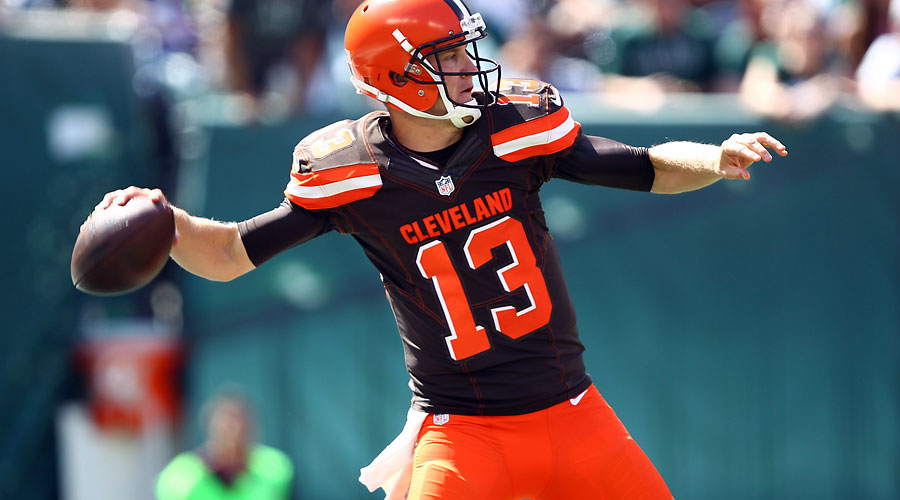 The Steelers will be without Ben Roethlisberger in this Week 10 AFC North divisional matchup, but I still like Pittsburgh to get the home win in this matchup, thanks mostly to the rushing of veteran running back DeAngelo Williams and playmaking ability of speedy wide receiver Antonio Brown.Pittsburgh has gone 5-4-1 ATS in its last 10 home games while winning each of their last 10 home games against the Browns and compiling a solid 6-4 ATS mark over the span. The Browns are 0-2 ATS over their last two road games and just 1-7 SU over its last eight road games overall.While I will admit that I have been impressed with how hard the Browns have played this season for Mike Pettine, I believe Pittsburgh’s sheer desperation to avoid another costly loss and keep their playoff hopes alive will spur them on to victory behind backup quarterback Landry Jones.61 percent of public bettors agree that the Steelers are the pick for this divisional matchup, although I will admit that I think the Browns could make it a bit closer than most NFL fans expect.