NFL News and Rumors
Eli Manning, Tom Coughlin and the rest of the New York Giants will look to pull off another ‘magical’ win over Tom Brady, Bill Belichick and the New England Patriots when the two rivals square off on Sunday at MetLife Stadium in an intriguing pairing that could turn out to be the most exciting online betting game on the Week 10 docket.Now, let’s find out if the G-Men can pull off the huge upset and hand the Pats their first loss of the 2015 season.

The Patriots remained unbeaten by spanking the Washington Redskins 27-10 in Week 9 to cash in as 14-point home favorites.Tom Brady completed 26 of 39 passes for 299 yards with two touchdowns and one interception while veteran running back LeGarrette Blount rushed for 129 yards and one score on 29 carries.Kicker Stephen Gostkowski added a pair of short field goals for New England and the Pats totally shut down Washington’s rushing attack by limiting the Skins to just 37 rushing yards in the win.The Patriots are ranked first in scoring (34.5 ppg) and fifth in points allowed (17.5 ppg), but they’ve also lost three straight to the G-Men, including the aforementioned two Super Bowls.“We’ve always had very, very close games against them even when we’ve won,” Brady said. “We just haven’t won as many of them as I would’ve liked to have won.”The Pats, who are tied for second in turnover margin at plus-seven, will face a Giants team that is an NFL-best plus-12.“They rip the ball out, forced a lot of interceptions this year,” Brady said. “They’ve got a lot of playmakers. I think their scheme really plays a part of that.”

The Giants have alternated SU wins and losses over their last five games but got a solid 32-18 win over Tampa Bay in Week 9 to cash in as 1.5-point road favorites tough the final score was no indicative of how close the game actually was.Eli Manning completed 26 of 40 passes for 213 yards with two touchdowns and two interceptions and the Giants recovered three fumbles in the win while holding the ball for almost 10 full minutes more than the Bucs.The good news for New York heading into this contest is the fact that head coach Tom Coughlin has gone 5-1 against Bill Belichick in six career meetings.“It does get your motor running, no question about it,” said Coughlin about facing the Patriots.Giants’ defensive end Jason Pierre-Paul made his season debut after severely injuring his right hand in a July 4 fireworks accident. JPP accounted for two tackles in his return but gave his teammates a huge emotional lift.“I think the players were excited to have him as a part of our team and have him active tonight,” Coughlin said. “I think he made a couple of outstanding rushes, particularly at the end. … That was critical at that time.”The Giants are ranked fifth in scoring (27.4 ppg) and 19th in points allowed (25.1 ppg). 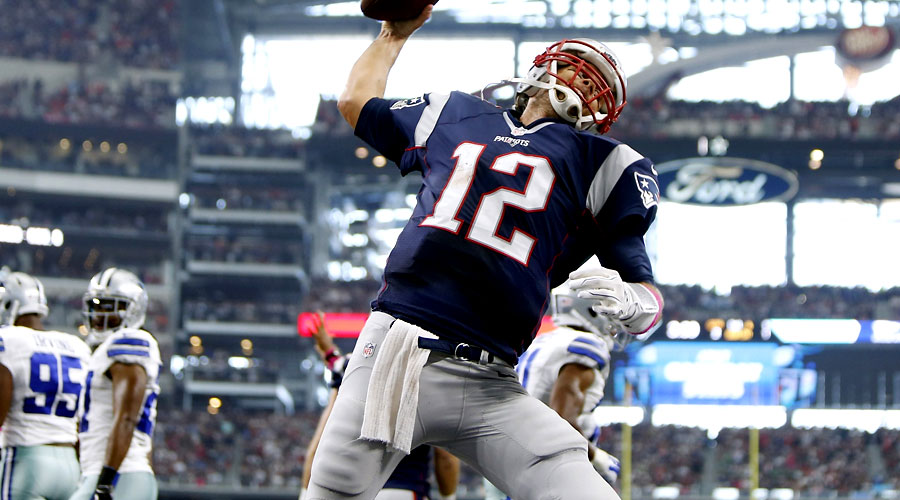 Even at home, there’s absolutely no reason whatsoever to believe the New York Giants are going to cover the spread against New England in this Week 10 matchup.With that, said I am going to go ‘against the grain’ and back Eli Manning and the G-Men to get the job done against Tom Brady and the Pats, much like they’ve done in beating New England five of the last six times they’ve met, including twice in the biggest game of all – the Super Bowl.New York has won three straight and four of their last six at home while going 4-3 ATS over their L/7 home dates.The Giants apparently get inspired to play the Pats as they’ve gone 6-1 ATS in their last seven games against New England and a perfect 4-0 ATS over the last four meetings.The New England Patriots didn’t look overly stupendous in beating Washington on Sunday and I believe they’re ripe for the picking in this contest, even though there’s no doubt that the Giants have their issues they need to address.With New York going 4-0 ATS in the last four meetings, I like the G-Men in a stunner.