NFL News and Rumors
If you’re looking to increase the annual NFL betting bankroll then you should know that Sunday’s Week 10 matchup between the Philadelphia Eagles and Miami Dolphins is offering as much value as any pairing on the entire Week 10 docket. Here’s why.

The Dolphins have lost two straight under interim head coach Dan Campbell after winning their first two games under their new leader following the firing of former head coach Joe Philbin a month ago.   The Fins were on the wrong end of a humbling 33-17 loss against AFC East division rival Buffalo in Week 9 while never coming close to covering the spread as a 3.5-point road dog.   Dolphins quarterback Ryan Tannehill completed 27 of 36 passing for 309 yards but failed to throw a touchdown pass in the loss. Defensively, Miami allowed Bills running back LeSean McCoy and Karlos Williams both top the 100-yard plateau wile also allowing enigmatic wide receiver Sammy Watkins to have his best day since being drafted by the Bills in the 2014 NFL Draft.   “We were able to move the football pretty much consistently all game,” Tannehill said. “We just didn’t score enough points. We have to be able to finish drives and get the ball in the end zone.”

The Eagles have won three of their last four games including their thrilling a 33-27 overtime win over Philadelphia as a 3-point road favorite on Sunday night. 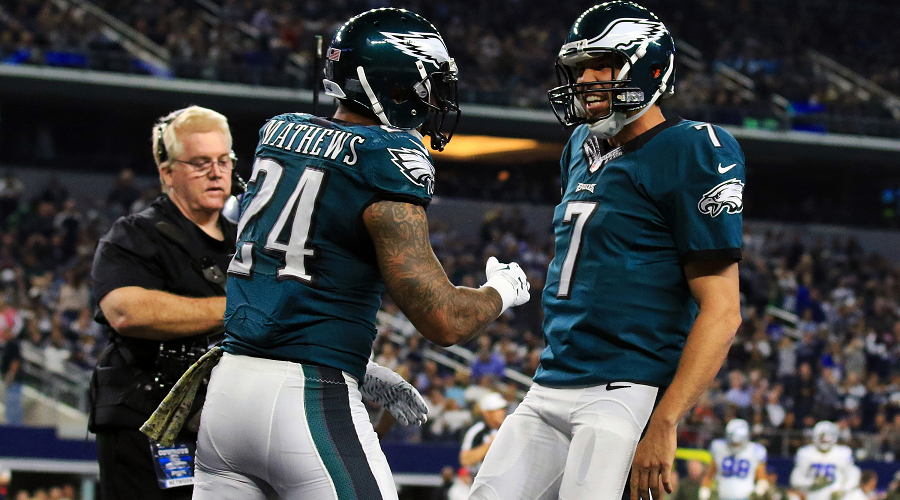 Philadelphia quarterback Sam Bradford connected with wide receiver Jordan Matthews on a 41-yard touchdown on the first possession of overtime to lift the Birds to victory and get them back to .500 at 4-4. “It’s coming your way, win right here,” Bradford said he told Matthews in the overtime huddle. “And sure enough, he ran a great route, and obviously the catch was huge.”   The Eagles now trail the division-leading New York Giants (5-4) by a half-game and say they realize the opportunity in front of them. “We’re just trying to get wins each week, and then we’ll pick our heads up after that last game against the Giants and see if we won enough,” Eagles coach Chip Kelly said. “Our mentality is every single week we’ve got to go out and play to the end.”   Bradford completed 25 of 36 passes for 295 yards with the one touchdown and no interceptions in the win while Matthews had nine catches for 133 yards and former Cowboys running back DeMarco Murray added 161 total yards and one score.

The Philadelphia Eagles may have their faults, but they’re basically unblemished when compared to the dysfunctional Miami Dolphins. After winning their first two games under interim head coach Dan Campbell, the Fins have reverted back into their former selves in falling to New England and Buffalo the last two weeks.   The Fins have given up at least 33 points in each of their last two games and that doesn’t bode well as they face a Philadelphia team that has scored 27 points or more in each of their last three victories.   The Birds are 3-1 SU and ATS over their last four games and 6-4 ATS over their last 10 home games while Miami has gone 1-3 SU and ATS over its last four road games, just 4-6 ATS over their last 10 road dates and a woeful 3-10 ATS over its last 13 games   The Birds are better on both sides of the ball and will beat the listless Dolphins by at least a touchdown to cover the spread.   My Pick: Philadelphia 28 Miami 21
Older post
Newer post