Soccer Betting News
Most of the sixteen-year-old kids in Milan are busy with schoolwork. However, one of the city’s best-known teens, Gianluigi Donnarumma, is manning the pipes for AC Milan, the local Serie A squad. His coach, Sinisa Mihajlovic, is already calling him “the future of Italian football.” Donnarumma has started four straight games for his side, and his reputation has been growing amongst resporters and soccer odds fans so quickly that the makers of FIFA 2016 have already taken notice. This weekend, AC Milan faced powerhouse Juventus. In the other goal was Donnarumma’s ideol, the legendary Gianluigi Buffon.

Buffon’s 20th anniversary is marked by the rise of Donnarumma, as @JamesHorncastle explains https://t.co/CGQwDJPdLY pic.twitter.com/3u4MjWM7mA

Currently standing 6-foot-5, Donnarumma has always been on the tall side. When he played youth soccer, his size inspired protests from opposing coaches, so his mother always made sure to have his birth certificate on hand to show that he was the right age. Donnarumma’s older brother went into the Milan soccer academy first, but he never made it to the field – instead, AC Milan sold him to the lower-level team Genoa.Donnarumma made his debut for AC Milan in August, when Mihajlovic put him on the pitch in a friendly against Real Madrid. He came on in the 72nd minute to replace Diego Lopez. The game went to penalty kicks, and Donnarumma saved a shot from the spot by Toni Kroos, a member of the German World Cup championship team. However, he missed the key save as AC Milan lost 10-9 on kicks. 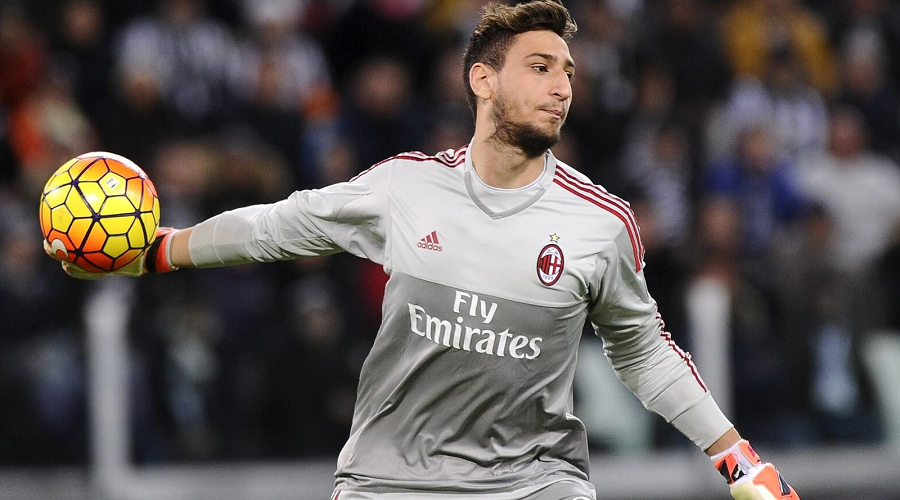 On October 25, Donnarumma made his Serie A debut against Sassuolo, as the team won 2-1 at home. At the age of 16 years and eight months, he was the youngest goalkeeper to make his debut in Serie A history since 1980, when Gianluca Pacchiarotti came onto the pitch for Pescara at the age of 16 years, 192 days. MIhajlovic let Donnarumma know the day before that he would be the starting netminder.With Diego Lopez on the shelf with a knee injury, Donnarumma has the starting job for now. On November 7, when Milan played Atalanta, he made three terrific saves to bring a point in the 0-0 draw. This was AC Milan’s first clean sheet of the entire season. The national under-21 team has called him up as well, a sign of how well he is progressing.When Donnarumma saw Buffon, he knew he was playing against the gold standard for Italian goalkeeping. As Donnarumma told BBC Sport, “Buffon is my idol. My dream is to become a regular in the senior national team and follow in his footsteps. Everyone would like to have a career like his.” Buffon was also a teen (albeit 17) when he made his debut with Parma – against AC Milan, interestingly enough – way back on November 19, 1995. He has won 154 caps with the Italian national team and is viewed as one of the best goalies in the history of soccer. Can Donnarumma match Buffon? Only time will tell, but for now, he is excelling in Milan.
Older post
Newer post