UFC Betting News
Many people have heaped scorn upon Ronda Rousey after her shocking MMA betting defeat to Holly Holm, going down by knockout in the second round. To be fair, she’s gotten a lot more scorn that men in her situation have received. While such undefeated titans as Mike Tyson also eventually took their first loss, they didn’t get the sort of shaming that has followed her all over the Internet in recent days.

It’s true that Rousey no longer has that patina of invincibility that had followed her. However, she’s going to become a lot more interesting in the weeks and months that follow. She had already been talking about retirement, for goodness’ sake. Now that has to go onto the back burner as she starts to think instead about the possibility of redemption.Until that fight, Rousey had never failed to win in an MMA tilt. She’d never even had to work that hard. In her last three fights, her opponents had succumbed in 34, 14 and 16 seconds, respectively. All of that came to an end when Holm, 34, fended off Rousey’s attempts to get her into a grapple and instead rocked her with jabs and hooks before knocking her out with that left leg kick that has gone viral. That makes Holm the new bantamweight champion, a victory that is just as stunning in women’s sports as the beating that Roberta Vinci gave Serena Williams on the tennis court. 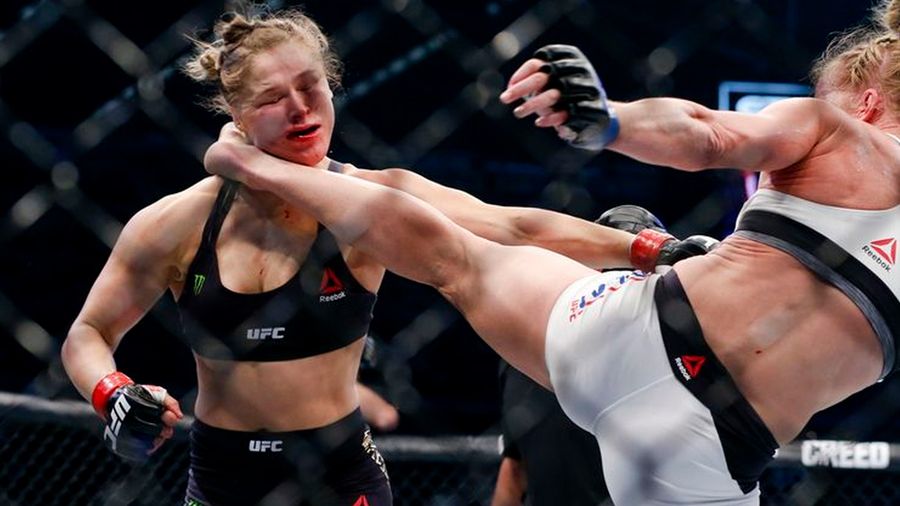 So what will be next for Rousey? Sure, she’s talked about going away from the sport for a while. However, you have to think that a rematch is coming next. UFC boss Dana White is already talking about Holm-Rousey II, and the UFC has built its bank by getting its fighters to take part in bouts that the crowds want to see. So there will be a lot of pressure moving the two women toward the ring again.However, this isn’t just an interesting time for Rousey. It’s also a crucial moment for women’s mixed martial arts – not to mention the whole MMA structure. Even if you dismissed Rousey’s fame as the product of so much hype – long a part of every fighter’s schtick – you still can’t dismiss the change that Rousey had brought to her sport. When Rousey started MMA fighting, the UFC didn’t even have a women’s fighting organization, and she became the marquee star for the sport, headlining nights that were stacked with matches featuring men. The UFC was using Rousey’s popularity to spread her sport all over the world. It hasn’t been that long since the UFC didn’t think that women’s fighting was worth organizing because it couldn’t draw an audience.Of course, Rousey’s charisma helps – her blend of valor with razor-sharp wit is captivating. Rousey was moving into the mainstream in ways that male UFC stars hadn’t, and the media loved it.So now that Rousey is moving on after her loss, you’ll remember that America loves an underdog, loves a comeback. So when Rousey returns, just as many people will be watching.
Older post
Newer post