NCAA Football Betting News
The safety position is among the most vital on the football field, as the transition to more pass-heavy offenses mainly relies on this position. While there is still some time left before the 2016 NFL Draft, a good number of NFL franchises have already started the process of assessing their draft prospects in the safety position in the bid to bolster their performances in the football odds. Since safeties could be a hot commodity in the upcoming NFL Draft, here are some early top prospects in the country to watch out for in the remaining course of the current NCAAF odds season.

Cash is a hybrid type of safety whose set of skills can translate favorably to the weak linebacker position. He has notched 16.5 tackles with three broken up passes so far this season. Cash is 6’2’’ and 215 pounds, but importantly has the ability to play up near the line of scrimmage and make big plays in the running game. He functions best as a strong safety than a free safety and is likely to be selected as a second-round pick, mainly depending on his effort in the remaining games of the season. Considering many NFL franchises will be looking for help at the back end of their secondary in the upcoming draft, we don’t see him sliding any lower than the second round.

Even though Joseph has been a ball hawk at West Virginia, there are some growing concern about his 5’11’’, 195-pound frame and how it will impact his game at the next level. Regardless of his size, Joseph’s instincts, playmaking skills and ability to make heavy hits will definitely attract many suitors in the NFL. Plus, Joseph is still a college player and there is a very good chance that he can put on more muscles before lining up in the 2016 NFL Draft. Entering Week 11, he is averaging 5.0 tackles per game and has forced one broken up pass this season. 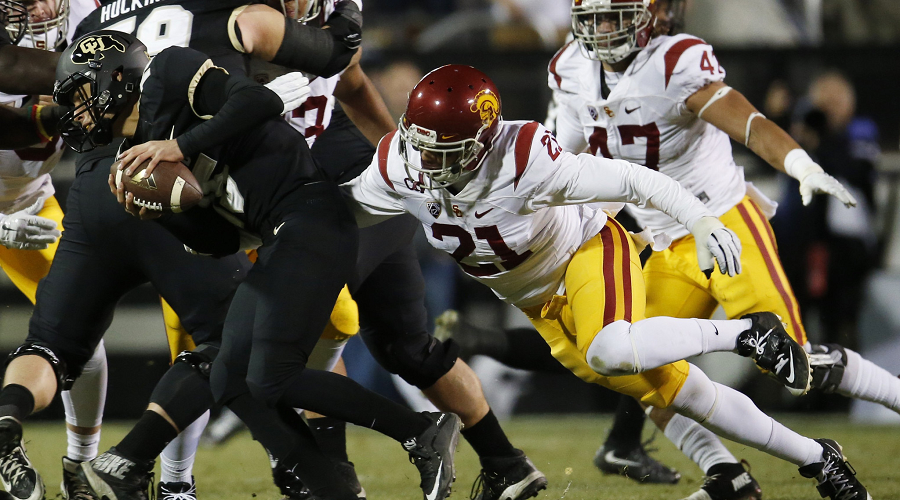 Craven is much bigger specimen at 6’1’’ and 225 pounds. Even though he is not as quick or good in coverage as most of the 2016 NFL Draft safety prospects, he can blow up opposing players near the line of scrimmage with his heavy-hitting abilities, making him a real asset in run defense. Not to mention, Cravens’ size and defensive instincts make him the perfect prospect in terms of being a safety that can step up to big bodied offensive players and make plays. With such admirable qualities, many NFL teams will love having Cravens as an intimidator in the middle of the field. As an added advantage, Cravens has shown promising signs of being able to potentially play the weak side linebacker, drawing some comparisons to safety Kam Chancellor, who often hits like a linebacker. That said, Cravens should be most useful at the safety position, where he has played formidably with USC this season. Currently, he is slotted in as the second-best safety prospect ahead of the 2016 NFL Draft, averaging 6.4 tackle per game with three total broken up passes this season.

Ramsey is among the top safety prospects available ahead of the 2016 NFL draft and he makes this list as a potential safety due to the intangibles he brings to the table. First and foremost, Ramsey, checking in at 6’1’’ and 204 pounds, has elite star speed and his ability to make plays at the line of scrimmage makes him an invaluable player. Ramsey is perhaps the most fascinating player on this list because most NFL teams love to utilize their versatile secondary members in other slots. For instance, players such as Tyrann Mathieu and Devin McCourty have popularized the role where a player who normally plays safety can also lineup against receivers as a cornerback when necessary. Given Ramsey figures to play with such versatility, functioning as a defensive back that can play both safety and cornerback positions, he should be selling like hot cake in the draft. Entering Week 11, he is averaging 4.1 total tackles per game and has forced 9 broken up passes.
Older post
Newer post