NFL News and Rumors
Andrew Luck has had a tremendous career in the NFL so far, with his team advancing another round each season he’s been in the playoffs. Even though the New England Patriots blew out Luck’s Indianapolis Colts in the AFC Championship last year, there was a lot of optimism among NFL Online Odds fans about how the Colts would progress even more this season.

If the #Colts keep failing Andrew Luck, will he stay in Indy? Doyel: https://t.co/rf45VW0Ouv pic.twitter.com/ipoZcM0YCa

So far, though, Luck has had nothing but snake eyes looking at him all season. He’s started seven games, and the Colts have lost five of them. When Luck finally delivered a win over the Denver Broncos, he ended up suffering a kidney laceration that will keep him out several more weeks. When his backup, Matt Hasselbeck, has started games, the Colts have done nothing but win. Luck’s pattern in losses has been to turn the ball over at exactly the wrong time. In addition to the injuries, Luck has played extremely poorly. His passer rating as a starter is a league-low 71.6 (for starters). He leads the league in interceptions with a dozen. Hasselbeck is sympathetic; he told ESPN.com, “The only thing I can say is he’s trying really hard. He might be trying too hard.” We’ve never seen Luck looking like he has to try at all. As a rookie coming in from Stanford, he led the Colts to 11 wins three years in a row, going to the wild card, then the divisional round, then the conference championship. His fourth season, though, has not gone according to plan. Not at all. 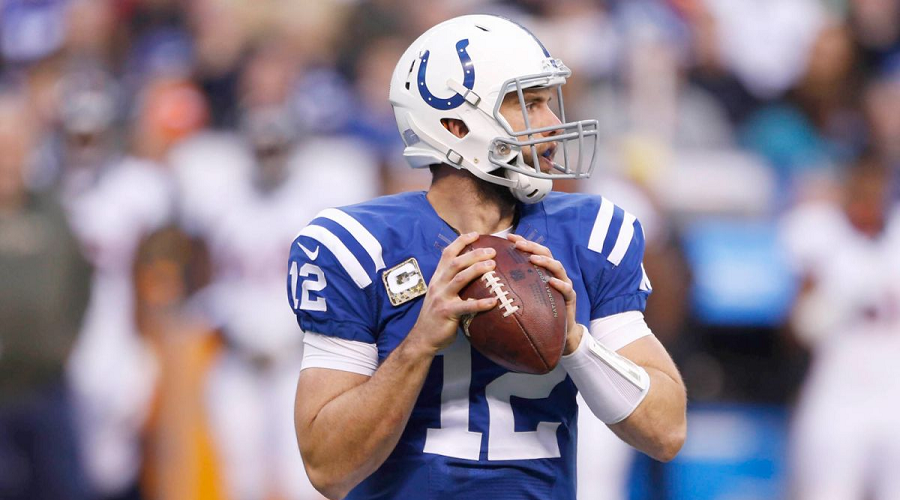 Some of this has to do with the porous offensive line that the Colts have put before Luck. Over the last three and a half season, Luck has taken more hits while throwing than any other signal-caller in the league. Before this season, Luck had not missed a single game since his freshman year at Stanford. Weeks 4 and 5 saw him on the sideline this year with a shoulder injury. Fox Sports reported recently that Luck has been playing with fractured ribs. After the Denver game in Week 9, the kidney laceration was revealed. All Luck will say is, “I’ve got to play better,” according to ESPN.com. For most NFL quarterbacks, the fourth season is the year when they finally come into their own. In many cases, they get to spend their first three seasons behind a veteran starter, sort of like Hasselbeck, Tony Romo and Aaron Rodgers did. However, it’s a year when many starting quarterbacks struggle. It happened to Tom Brady and Peyton Manning that year; that was the year when Manning threw four picks in one game, and his head coach, Jim Mora, went on that infamous tirade about “Playoffs?”. To Hasselbeck, Luck reminds him of a young Brett Favre. Favre had a penchant for making the dangerous play – the one that would sometimes lead to an amazing touchdown but at other times would lead to a head-scratching interception. He tries to shoehorn throws into tight windows. Luck has always thrown interceptions, but in seasons past he has followed them up with spectacular completions – and victories. This year, though his injuries have caught up with him. The hope is that, after time to heal, Luck will return to the terrific gunslinger that Colts fans have come to love.
Older post
Newer post