NCAA Football Betting News
The streaking North Carolina Tar Heels are making a bid to reach one of the six New Year’s Day bowl games, but in order to stay in consideration for such a prestigious honor and cover the NCAAF spread, the Heels will need to avoid the upset when they hit the road to face a Virginia Tech Hokies team that looks a bit dangerous from where I’m sitting.Now, let’s find out if the Hokies can pull off the upset at home to kill Carolina’s big-time bowl game hopes!

Thursday’s practice is in the books, so it’s time to load the equipment truck for the road trip to Ohio State. pic.twitter.com/NTivcy5lAK

The Tar Heels have won nine straight games since dropping their regular season opener and beat the hell out of Miami in its 59-21 Week 11 win while easily covering the spread as a 12.5-point home favorite.Star quarterback Marquise Williams led the way for the Heels once again by completing 11 of 16 passes for 105 yards with one touchdown and no interceptions while adding 101 rushing yards and three more touchdowns on 12 carries.Running back Elijah Hood added 132 yards and one score on 17 carries as the Tar Heels jumped out to a 31-0 halftime lead before cruising to victory.“That’s when you know when you’re having success on offense,” quarterback Marquise Williams said, “when you can run the ball and also throw the ball.”North Carolina has won its last two games by a combined score of 125-52.“We are getting better every week,” North Carolina coach Larry Fedora said. “It’s because of the leadership from those seniors and those players.”The Tar Heels are ranked a stellar ninth in scoring (42.0 ppg) and equally impressive 18th in points allowed (18.8 ppg).

Virginia Tech has won two straight to even its record at 5-5, including its narrow 23-21 Week 11 win over Georgia Tech while covering the spread as a 1.5-point road underdog.Quarterback Michael Brewer completed 15 of 29 passes for 178 yards with one touchdown and one interception, but it was running back Travon McMillian that led the way to victory by rushing 24 times for 135 yards and two touchdowns.The Hokies also limited Georgia Tech to just 97 passing yards and seven points over the final three quarters and have a lot to play for as they try to send longtime head coach Frank Beamer into retirement on a high note.“I can’t tell you how much this win means,” said Beamer, the winningest active coach in the NCAA’s top division.Virginia Tech only needs to win one of its final two games to become bowl eligible.The Hokies are ranked 60th in scoring (29.8 ppg) and a respectable 49th in points allowed (24.0 ppg). 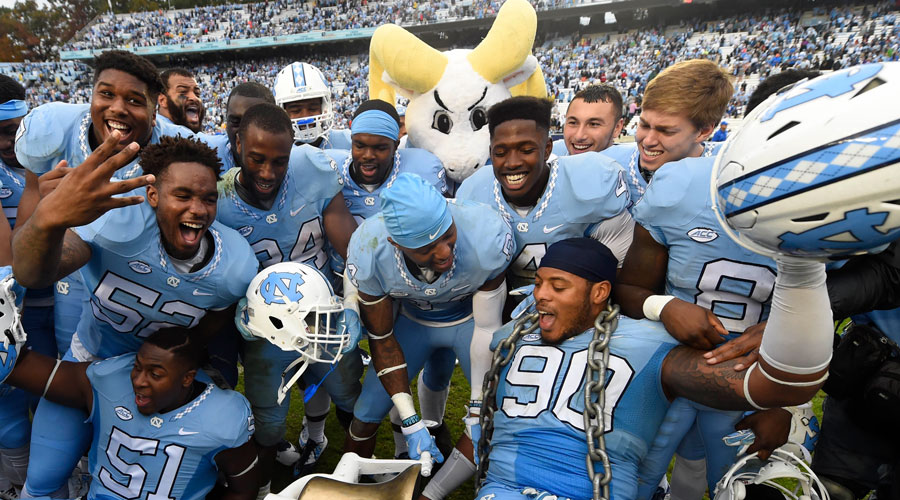 As much as I’d like to see Virginia Tech win for Frank Beamer, I don’t see it happening in this contest no matter how hard I try to envision it.North Carolina has gone 5-1 ATS in their last six conference games and 5-2 ATS in its last seven road games.Conversely, Virginia Tech is just 3-7 ATS in their last 10 games against a team with a winning record and just 6-15 ATS in their last 21 games following an ATS win.Forget the key trends surrounding this matchup, the fact of the matter is that North Carolina is too good on both sides of the ball to lose this contest, even on the road.