NFL News and Rumors
Drew Brees and the New Orleans Saints will look to overcome Kirk Cousin and the Washington Redskins when the two playoff hopeful rivals square off on Sunday in an intriguing Week 10 matchup at FedExField.Now, let’s find out which one of these teams will keep their slim postseason hopes alive by getting the win.

The Saints had their three-game winning streak snapped in its humbling 34-28 Week 8 loss against Marcus Mariota and the Tennessee Titans while failing to cover the NFL betting line as 6.5-point home favorites.Making the loss even more difficult to swallow is the fact that New Orleans had a chance to win the game, but saw kicker Kai Forbath miss a potential game-winning 46-yard field goal as time expired just one week after drilling a 50-yarder to beat the New York Giants 52-49.Forbath’s try may have been tipped at the line of scrimmage.“It’s hard to tell without seeing the film if the trajectory was low, if the hold was clean,” Saints head coach Sean Payton said. “I’m not sure. We hit a big kick last week to win and had an opportunity to do it. Obviously we didn’t. We’ve got to get that cleaned up.”Drew Brees completed 28 of 39 passes for 389 yards and three touchdowns, but it wasn’t enough as Tennessee rookie signal-caller Marcus Mariota threw for 371 yards and four touchdowns.

The Redskins enter this contest coming off a humbling 27-10 loss against New England in which they failed to cover the NFL betting line as a 14-point road underdog.Quarterback Kirk Cousins completed 22 of 40 passes for 217 yards with one touchdown and one interception but the Skins couldn’t stop Tom Brady and veteran running back LeGarrette Blount (129 rushing yards, one TD).“I know we weren’t on the same page today,” said Redskins offensive tackle Trent Williams. “We didn’t make enough plays, we turned the ball over. We helped them beat us.”Washington’s receivers dropped a whopping seven passes in the loss.“It didn’t help,” Washington head coach Jay Gruden said afterward. “When you’re playing the best team on the road, we’ve got to make some plays. We didn’t make enough plays to challenge the champs.” 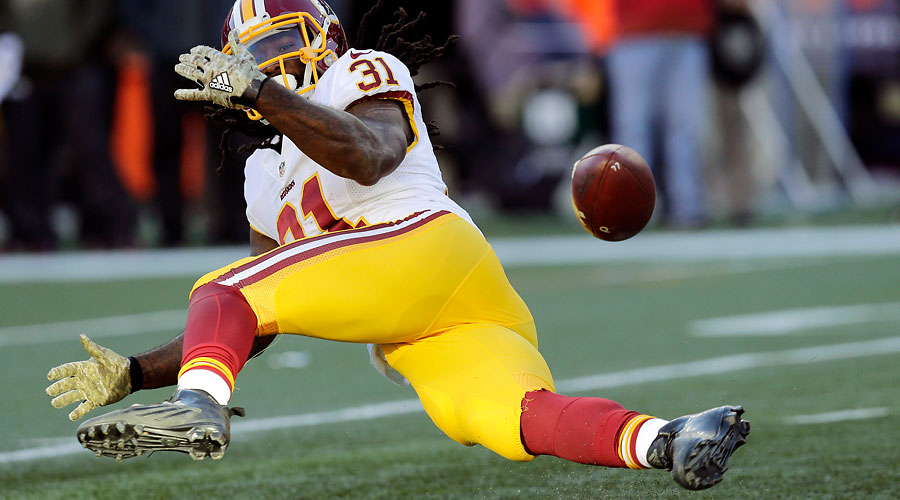 I have no idea why a whopping 70 percent of public bettors likes New Orleans to bring home the bacon in this Week 10 pairing, but I sure don’t!The Redskins have lost three of their last four games, but they fought their little hearts out against the Patriots last weekend and I believe they’re due for a win at home against New Orleans. Washington has won three straight home games while covering the spread in two of those contests while the Saints have gone 1-3 SU in its last four road games and 2-3 ATS in its last five road dates and just 4-5-1 ATS in their last 10 games overall.Still, it’s not even the Saints’ mediocre ATS statistics that bothers me, it’s the fact that they can’t stop running water in giving up almost 30 points per game this season. Maybe it’s me, but I can’t bring myself to back a team that is giving up points like they’re going out of style.I like the Skins for the narrow home win and accompanying ATS cover.