NFL News and Rumors
The Buffalo Bills and the New York Jets will both be looking to build on their respective Week 9 wins while taking another step toward what they hope will be a postseason appearance when they square off in their Week 10 NFL Odds AFC East divisional battle on Thursday night. Now, let’s find out which one of these playoff hopefuls is going to bring home the bacon.

The Bills rolled all over the Miami Dolphins last weekend en route to a commanding 33-17 win that helped them easily cover the NFL betting line as a 3.5-point home favorite. Starting quarterback Tyrod Taylor completed 11 of 12 passes for 181 yards and one touchdown while running back LeSean McCoy rushed for 112 yards and one touchdown on just 16 carries and fellow back Karlos Williams added 110 yards and two scores on nine carries.“The offensive line really kicked butt today,” McCoy said. “I shouldn’t use the word bully, but they really bullied up front.” Enigmatic wide receiver Sammy Watkins caught eight passes for a career-high 163 yards and a 44-yard touchdown.”For the most part, when I’m healthy, I can go out there and make plays,” Watkins said.The win helped the Bill get back to .500 and snap a three-game home losing streak.”We think we have a lot of talent. We had so many injuries that we haven’t necessarily seen it,” Ryan said. “When we’re healthy, we’re going to be pretty tough.”The Bills are ranked eighth in scoring (26.1 ppg) and 16th in points allowed (23.8 ppg).

The Jets picked up a hard-fought 28-23 win against the suddenly feisty Jacksonville Jaguars on Sunday despite failing to cover the spread as a 7.5-point home favorite. 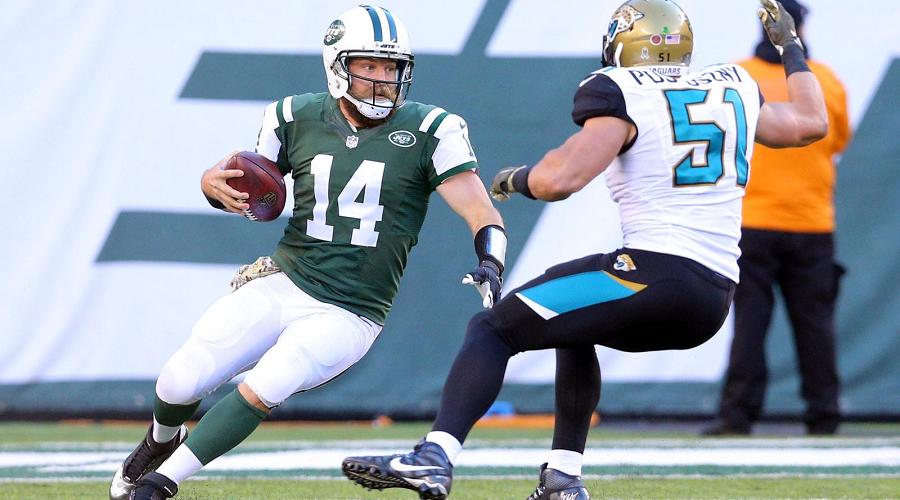 Veteran quarterback Ryan Fitzpatrick completed 21 of 34 passes for 272 yards and two touchdowns and the Jets’ voracious defense picked off Jags quarterback Blake Bortles twice in the win while sacking him a whopping six times to halt their two-game losing streak.“The biggest thing was just two losses in a row and how are we going to respond having a home game vs. a team that we think we should win the game (against)?” said Fitzpatrick, who played through torn ligaments in his left thumb. “There was some back and forth in the game, certainly.”The Jaguars out-gained the Jets 436-290 but committed four turnovers, including three in the final stanza. “Got some big turnovers when we needed them and the offense was able to score touchdowns,” Fitzpatrick said. “So it was a big win for us.”The Jets are ranked 11th in scoring (25.0 ppg) and a stellar ninth in points allowed (20.2 ppg).

The Jets got the win at home against Jacksonville in Week 8, but I was far more impressed with Buffalo’s resounding win over beleaguered Miami and I believe the return of starting quarterback Tyrod Taylor, combined with a healthy LeSean McCoy, will be just what the doctored ordered for the Bills.Buffalo is 4-1 ATS in their last five games against their AFC East division rivals while New York has gone 1-4 ATS in their last five games in the month of November. The Bills are 3-0 SU and ATS in their last three meetings against the Jets and 5-2 ATS against their longtime AFC East division rivals in the last seven meetings. Buffalo is also 3-1 SU and ATS in their last four road games.While the Jets have compiled a bunch of encouraging ATS trends heading into this contest and 55 percent of the betting public likes the Jets to cover the spread, I like the Buffalo Bills to cover the NFL betting line by recording the outright road win! The Bills are finally healthy and have a slew of dangerous playmakers in Tyrod Taylor, LeSean McCoy, Karlos Williams and Sammy Watkins. My Pick: Bills 21 Jets 17
Older post
Newer post