NFL News and Rumors
Win and we’re in!That’s the motto the Houston Texans will be taking when they look to dispatch the Jacksonville Jaguars in their season-ending Week 17 AFC South divisional NFL match up on Sunday at 1:00 PM ET, live from NRG Stadium in Houston. Now, let’s find out if the incomparable J.J. Watt can lead the Texans to the season-defining win and ATS cover.

Why Bet The Jacksonville Jaguars Odds at +6

Because they’ve played their best football of the season over the last seven weeks!The Jacksonville Jaguars will look to win at least six games for the first time since 2010, but they face a tall task in beating the red-hot Texans.Young quarterback Blake Bortles has had a fine season, even if he doesn’t get the same recognition of some other quarterbacks. Bortles has completed 58.9 percent of his passes for 4,189 yards with an impressive 35 touchdowns and 16 interceptions. Bortles has tossed eight touchdown passes in his last three games.Gifted, but unheralded wide receivers Allen Robinson and Allen Hurns have combined for 2,305 receiving yards and 24 touchdowns while rookie running back T.J. Yeldon leads the rushing attack with 740 yards and two touchdowns.The Jags average 24.7 points per game to rank a surprising 10th, but give up 27.9 points per game defensively to rank 31st overall. Jacksonville owner Shad Khan announced this week that head coach Gus Bradley would return in 2016 despite going just 12-35 in three seasons.“I spoke to Gus Bradley today to confirm to him that he will continue as head coach of the Jacksonville Jaguars in 2016,” Khan said, according to the team’s website. 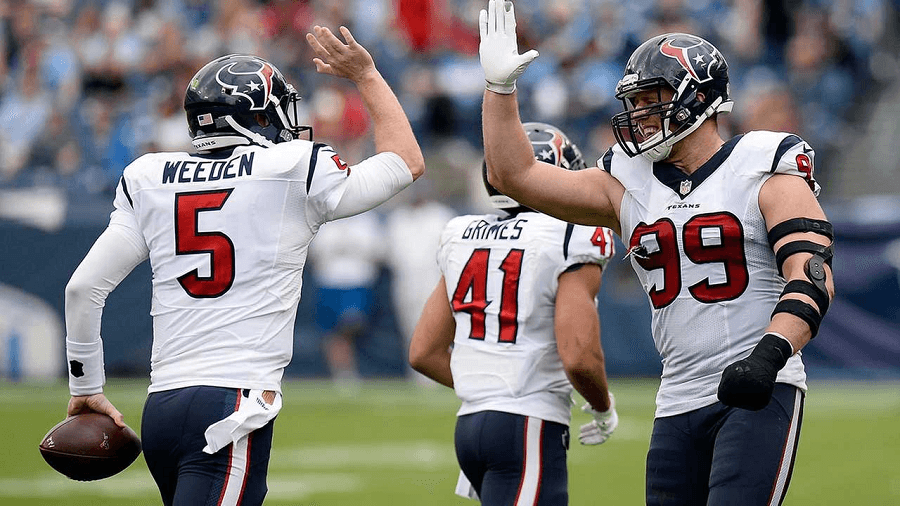 Why Bet The Houston Texans Odds at -6

Because a playoff berth is on the line! If the Texans win this game, they’ll win the AFC South and get the accompanying playoff berth that goes along with being a division winner. Houston has won two straight and six of their last eight games overall, including their emphatic 34-6 win over Tennessee last weekend with veteran signal-caller Brandon Weeden under center.The Texans are set to play this contest with starter Brian Hoyer back under center after the veteran missed the last two games after being sacked five times and knocked out against the New England Patriots three weeks ago. “I know what I’m going to get from him, a guy that’s going to go out there and give us his all,” Pro Bowl wide receiver DeAndre Hopkins said of Hoyer.Hoyer has completed 60.5 percent of his passes this season while throwing for 2,357 yards with 18 touchdowns and just six interceptions. Supremely gifted wideout DeAndre Hopkins has had a breakout campaign by catching 104 passes for 1,432 yards and 11 touchdowns. Despite Hopkins’ efforts, Houston averages a modest 20.6 points per game (24th).The Texans stout defense is limiting the opposition to just 20.5 points per game to rank 11th. Linebacker Brian Cushing leads the Texans with 104 tackles while standout defensive end J.J. Watt has recorded 14.5 sacks.