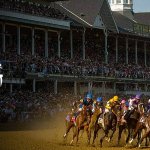 This Saturday, it’s all about Kentucky Derby and Kentucky Oaks prep races. The Withers takes place at Aqueduct, the Swale, Holy Bull, and Forward Gal happen at Gulfstream and over at Santa Anita, the Great Race Place runs the Robert B. Lewis. Also on Saturday, top 4 year old fillies and mares run in the Grade 2 Santa Monica. Check out top plays and Horse Racing Odds for the Top Stakes Races of the Week from Saturday, February 4th. You can also visit our Online Racebook to place your bets on active racetracks.

Saffie Joseph plans on saddling a couple in this one. The runner that should attract the most action of the two is Dialed In sired Mr. Ripple.

Shug McGaughey might have the favorite in this year’s Swale. General Jim finished fourth in the Mucho Macho Man in the last.

Those who don’t side with General Jim may go with Juan Alvarado trained Keanu. Two of a Kind, Aaraj, King Sparrow, and Super Chow also figure to run.

Although she finished seventh in the Breeders’ Cup Juvenile Fillies in the last, Todd Pletcher trained Atomically, no doubt, is going to attract dollars. Favoritism, though, could end up falling onto Flakes, a Juan Alvarado trained runner sired by Frosted.

Chad Brown plans on sending Aqueduct runner Undervalued Asset to Gulfstream for this. Anything Brown sends to the track we must take seriously. Twice As Sweet, Arella Star, and Apropos should also run.

If Saffie doesn’t enter Lord Miles in the Swale, he almost assuredly will enter the Curlin sired runner in this. Lord Miles should relish the distance.

Saffie could saddle the second choice in this as well. West Coast Cowboy finished fourth in an allowance in the last. Horseplayers should expect improvement.

Other contenders include Shadow Dragon, Cyclone Mischief, Mr. Bob, and Legacy Isle. Of the four, Legacy Isle rates the longest look. Legacy finished second in the Mucho Macho Man in the last.

So far, four runners are confirmed for the Robert B. Lewis Stakes. All four come from the Bob Baffert barn.

Bob decided to skip last Saturday’s Southwest at Oaklawn to run Arabian Lion in this. The Justify sired colt is supposed to be the next great three-year-old horse. Lion must beat barn mates Newgate, Worcester, and Hard To Figure.

Baffert will also saddle a contender in the Grade 2 Santa Monica. Fun To Dream won the Grade 1 La Brea in the last. The Baffert runner will be tough to beat.

Awake At Midnyte finished second to Fun To Dream in the La Brea. The Doug O’Neill runner projects to go off second choice. Anacapa, Samurai Charm, and Lady T should also run.