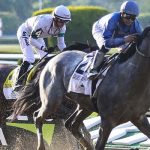 The 2021 Breeders’ Cup is approaching quickly, which is why every week there’s more important BC news. This past week, the most important news happened when Del Mar Racetrack said Bob Baffert could run his horses in this year’s Breeders’ Cup. Now that Bob has the go ahead, check out which horses Baffert trains that should make an impact. The 2021 Breeders’ Cup is approaching quickly, which is why every week there’s more important BC news. This past week, the most important news happened when Del Mar Racetrack said Bob Baffert could run his horses in this year’s Breeders’ Cup. Now that Bob has the go ahead, check out which horses Baffert trains that should make an impact. Also, check out top plays, Horse Racing Odds and the latest news in our 2021 Breeders’ Cup Betting update. You can also visit our Online Racebook to place your bets on active racetracks.

Bob Baffert, the greatest trainer in thoroughbred racing history, can enter horses in the 2021 Breeders’ Cup at Del Mar. It made no sense why Bob couldn’t run horses considering he had already run equines at Del Mar’s summer meet.

But politics invades everything in life nowadays. So even though Baffert hasn’t been stripped of Medina Spirit’s Kentucky Derby win, the silver-haired horseman must deal with extra security and increased testing.

It doesn’t seem fair. Baffert will play by the rules, though.

With that in mind, check out the four Baffert runner that should have a say in the outcome of the races in which they’re entered.

The Into Mischief sired beast is the fastest horse going 6 furlong in the world. Her speed ratings are on par with what Jackie’s Warrior has posted, which will make her co-favorite should she decide to run in the Breeders’ Cup Sprint.

If Baffert decides to really go for it and enters Gamine in the BC Distaff, she’ll be the one runner that can bury Letruska early and hold off the closers.

Bob could decide to go for the easy money and run in the BC Filly & Mare Sprint. She dominated last year’s F&M Sprint, winning by 6 ¼ lengths.

On paper, the front-runner looks to have no shot. Medina is likely to face the highest-rated older horse on dirt in fellow early runner Knicks Go.

But although Knicks Go will be tough to run with, or run down, the Derby winner busted out with a 107 Beyer figure in his last, a gate-to-wire victory in the Grade 1 Awesome Again.

Not only that, but Knicks Go has never won at 1 ¼ miles. Heck, he’s never raced at 1 ¼ miles and flubbed in the 1 1/8 miles Saudi Cup after getting pressure from another Baffert runner, Charlatan.

Medina is proven at the distance, has a high-cruising speed, mustn’t travel far to race, and has filled out. He can take the Classic at what should be big odds.

Private Mission won the Grade 2 Zenyatta Stakes the easiest of winners. She took charge before the turn and then sped away for a comfortable 2 ½ to 3 length victory. Bob is running her in the Breeders’ Cup Distaff.

How good is Private Mission? We don’t  know if she’s good enough to beat Letruska. What we do know is that she could improve off the effort, has a devastating turn of foot, and should get lost in the betting because she’s a 3-year-old filly running against older.

The Baffert 2-year-old figures to go off first or second choice to win the Breeders’ Cup Juvenile. Corniche is proven at 1 1/16 miles, the Juvenile distance. He’s also run the fastest of the Juvenile contenders.

If Corniche looks so great on paper, why is he fourth on our list of Baffert horses with a shot to win their BC race? One reason is because Jack Cristopher, trained by Chad Brown, and Baffert charge Pinehurst have similar running styles. Both will be on the lead or close to it with Corniche.

Second, Todd Pletcher trained Major General doesn’t show the speed ratings, but he has shown an ability to sit and pounce, and that might be the best tactic to use to win the Juvenile. Finally, year in and year out, the BC Juvenile is one of the most competitive events over the 2-day Breeders’ Cup Festival.

Posted: Tuesday, October 12, 2021 4:50, EDT
In about three weeks, the best horses in the world descend upon Del Mar to run in the 2021 Breeders’ Cup World Thoroughbred Championships. The final preps for this year’s Breeders’ Cup happened over the weekend. Which horses displayed the talent required to win their BC race? Check out top plays, Horse Racing Odds and the latest news in our Read More

Posted: Monday, October 11, 2021 4:03, EDT
This week, Keeneland and Belmont run a few stakes races that could lead to Breeders’ Cup starts. Although it’s late in the game to prep a thoroughbred for the BC World Championships, sometimes, a horse could get hot right before the biggest day in American horse racing. Owners and trainers with hot horses often take a shot.  Check out top Read More

Posted: Tuesday, October 5, 2021 11:36, EDT
The final major preps for the 2021 Breeders’ Cup Classic are in the books. Wouldn’t you know it? The Belmont winner, Essential Quality, and the Kentucky Derby winner, Medina Spirit, are a couple of the favorites heading into the race. The overall chalk is Knicks Go, the super-fast Brad Cox trained runner who romped in this past Saturday’s Lukas Classic Read More

Posted: Monday, September 27, 2021 3:55, EDT
This weekend, graded Breeders’ Cup prep races happen at both Santa Anita Park and Belmont Park. At Santa Anita, the action starts on Friday with the Grade 1 American Pharoah Stakes. On Saturday, the Great Race Place runs grade one races the Rodeo Drive and the Awesome Again. Over at Belmont Park, the Grade 1 Champagne and Grade 1 Woodward Read More

Posted: Monday, September 13, 2021 5:24, EDT
This Saturday, Belmont Park reopens their doors. Big Sandy will prep races every weekend from now until about three weeks before the 2021 Breeders’ Cup. Check out Horse Racing Odds and more information on the American Jockey Club Invitational, the Jockey Club Oaks and the Jockey Club Derby at Belmont Park on Saturday as well as a few of the Read More

Posted: Monday, August 30, 2021 6:41, EDT
The summer of graded stakes race action continues this weekend when Saratoga runs five graded races and Del Mar runs two. The graded races at The Spa include a couple of grade one events, the Flower Bowl at 1 /38 miles over the turf and the 1 ¼ mile over dirt Jockey Club Gold Cup. Check out top plays and Read More

Posted: Monday, August 23, 2021 11:58, EDT
On Saturday, August 28, all eyes will be on Saratoga as Belmont Stakes winner and top-rated three-year-old Essential Quality runs in the the Travers Stakes. Check out top plays and Horse Racing Odds for the Top Stakes Races of the Week from Saturday, August 28th. You can also visit our Online Racebook to place your bets on active racetracks. Top Read More

Posted: Monday, August 16, 2021 3:16, EDT
Del Mar’s biggest day during their 2021 summer meet happens on Saturday. The racetrack dubbed “where the turf meets the surf” runs 5 graded races including the Grade 1 Pacific Classic. Check out top plays and Horse Racing Odds for the Top Stakes Races of the Week from Saturday, August 21st. You can also visit our Online Racebook to place Read More

Posted: Monday, August 9, 2021 6:13, EDT
This weekend won’t be as big as last. Saturday, though, is Arlington Million Day. Seven graded stakes races happen this weekend, including the Grade 1 Fourstardave Handicap at Saratoga Race Course, and three grade one races, including the Grade 1 Beverly D. Stakes at Arlington. The Grade 3 Longacres Mile is at Emerald Downs on Sunday.  Check out top plays Read More

Posted: Monday, August 2, 2021 6:27, EDT
This weekend, Saratoga and Del Mar kick it up a notch. The Spa has three Grade 1 races on Saturday. Although Del Mar doesn’t run a Grade 1 this weekend, they do run 3 Grade 2 races. Check out top plays and Horse Racing Odds for the Top Stakes Races of the Week from Friday, August 6th to Sunday, August Read More

Posted: Monday, July 26, 2021 3:16, EDT
On Saturday, July 31, three graded races happen at Saratoga: the Grade 1 Alfred G. Vanderbilt, the Grade 2 Bowling Green Stakes, and the Grade 2 Jim Dandy Stakes. The Jim Dandy is a prep for the Travers Stakes in late August. Check out top plays and Horse Racing Odds for the Top Stakes Races of the Week from Saturday, Read More

Posted: Tuesday, July 20, 2021 6:31, EDT
There are a lot of things to love about the Olympic Games, whether it’s cheering on your country or learning about sports that you don’t get to see on TV that often. There are certainly plenty of different sports to choose from, which means that there is a little something for everyone. For those of you who love horses, the Read More

Posted: Thursday, July 15, 2021 5:35, EDT
The Breeders’ Cup doesn’t happen until early November. But that doesn’t mean we shouldn’t check out updated odds. Most BC contenders will have a single race from mid-July to November 6. It makes sense to check out current odds on MyBookie and assess those odds based on our overlay and underlay criteria. See below for odds on 18 horses that Read More

Posted: Tuesday, July 13, 2021 5:31, EDT
The two top horse racing meets of the summer open this week. On Thursday, July 15, Saratoga, affectionately called The Spa, once again opens their doors to trainers, horses, and spectators. Over on the west coast, Del Mar, which horse racing fans have dubbed Where the Turf Meets the Surf, opens their doors after a coronavirus affected year. It’s time Read More