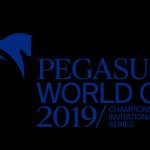 The 3rd Annual Pegasus World Cup takes place this Saturday on January 26. Some of the best horses in the world will head down to Gulfstream Park in Hallandale Beach, Florida for the winner’s share of $12 million.Right now, Breeders’ Cup Classic winner Accelerate is a +200 favorite. Will Accelerate take the Pegasus World Cup? Or, will one of his rivals grab the trophy?2019 Pegasus World Cup Odds, Preview & Picks When:  January 26, 2019 Where: Gulfstream Park, Hallandale Beach Florida TV: NBC Live Stream: NBCsports. The 3rd Annual Pegasus World Cup takes place this Saturday on January 26. Some of the best horses in the world will head down to Gulfstream Park in Hallandale Beach, Florida for the winner’s share of $12 million.

Right now, Breeders’ Cup Classic winner Accelerate is a +200 favorite. Will Accelerate take the Pegasus World Cup? Or, will one of his rivals grab the trophy?

What horses listed are definite for the 2019 Pegasus World Cup?

Of the horses listed above, Accelerate, City of Light, Bravazo, Patternrecognition, Gunnevera, Seeking the Soul, and Audible are listed as probable to make the race. The others on the above list might make the race, or might not.

Is Accelerate a true +200 chalk to win the Pegasus World Cup?

Maybe, maybe not. He looked great winning the Breeders’ Cup Classic, but his top competition in this, namely City of Light and Audible, didn’t run in the BC Classic.

Audible was on the bench until about a month ago while City of Light dominated on Breeders’ Cup Saturday when winning the BC Dirt Mile. Both those horses are good enough to challenge Accelerate.

Who has a better shot of beating Accelerate, City of Light, or Audible?

Both Audible and City of Light have a chance, though. Audible’s trained by Todd Pletcher. He lost his last race, but that was in the mud. The third place finisher in last year’s Kentucky Derby should be ready to show his best on Saturday. This is especially true if the dirt stays dry.

City of Light obliterated his competition in the Breeders’ Cup Dirt Mile. It wasn’t even close. He’s bred to run the 1 1/8 miles and will challenge Accelerate as soon as the gates open. He’s probably the horse with the best shot to take down the champ.

Which double-digit longhost has the best chance of winning the 2019 Pegasus World Cup?

The horse offering double-digit odds with the best chance of beating Accelerate and winning the Pegasus World Cup is no doubt Patternrecognition. The Chad Brown trainee has won 3 in a row, including the Grade 1 Cigar Mile.

He might not be bred to go longer than a mile. But, speed kills at Gulfstream Park and Patternrecognition will get the lead in the Pegasus World Cup. He might not stop. He’s the horse to back if you’re looking for a longshot.