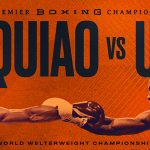 Ageless Manny Pacquaio steps into the ring to take on Yordenis Ugas in the lone championship fight happening on Saturday night. But even though belts aren’t on the line in this weekend’s bouts, the boxing action should be terrific. Check out Boxing odds, analysis, and a free boxing pick for seven of this Saturday’s top matches.

Ageless Manny Pacquaio steps into the ring to take on Yordenis Ugas in the lone championship fight happening on Saturday night. But even though belts aren’t on the line in this weekend’s bouts, the boxing action should be terrific. Check out Boxing odds, analysis, and a free boxing pick for seven of this Saturday’s top matches.

Yordenis Ugas is a good boxer. He’s fought some tough guys and has skills for days. But he faces one of the most remarkable pugilists in boxing’s history on Saturday night. Manny Pacquiao has won 3 straight. He beat Keith Thurman in 2019.

Pacquiao is a tough guy and should definitely give Ugas all he can handle. However, there’s a difference between Ugas and Pac that could end the Filipino’s fighting streak. Manny has always had to beat taller, longer, boxers.

But Ugas has range like Pac hasn’t seen in, maybe, a decade. Not only that, but Ugas fought last September. If Yordenis uses his jab and tags Pacquiao when Manny becomes overly aggressive, he can win this.

Kazakhstani southpaw Zhan Kossobutskiy is undefeated in 15 fights. He’s knocked out 14 of his opponents, which means he should have no trouble taking down Joey Dawejko on Saturday. If you can’t find a couple of rounds to back Kossobutskiy, consider adding the dominant boxer to a parlay.

Like Kossobutskiy versus Dawejko, Jose Larduet should have no trouble putting a beating onto Santander Silgado. Larduet is 5-0 with 4 knockout victories. Silgado does have a 30-8 record and has won 2 straight. But neither victory impressed. Not only that, but Silgado lost 5-of-6 before the 2 match winning streak. Look for a couple of rounds for the Larduet knockout instead of backing the chalk on the moneyline.

26-year-old Frank Martin is slowly making his way up the ranks. After beating Jerry Perez this past April, he took his record to 13-0 with 10 knockout victories. Ryan Kielczewski is 30-5 with 11 knockout wins. Kielczewski has lost 2-of-3 and hasn’t fought since last October. Here’s another bout on Saturday where boxing handicappers should look for a fight prop instead of backing the chalk on the moneyline.

Philippine fighter Mark Magsayo is 22-0 with 15 knockouts. Magsayo knocked out Pablo Cruz in the fourth-round in his last. Julio Ceja is a decent boxer. But he shows 2 losses and a draw in his last 3. Ceja must really step it up to beat Magsayo. We don’t see that happening.

26-5 with 18 knockouts, Oscar Escandon broke a 3 fight losing streak in his last when knocking out Jhack Tepoura in the first-round of their scheduled 10-round bout. But although Escandon looked good, he won’t parlay the victory into a win over 26-0 Carlos Castro. The 27-year-old has quickly become one of the better bantamweights in the division. Castro should have no trouble winning this. Look for a decent boxing prop.

A couple of warriors head into the ring in what should be an excellent bout. Victor Ortiz is 32-6-3 with 25 knockout wins. Robert Guerrero has won 20 of his 36 victories via KO or TKO. Guerrero, like Ortiz, shows 6 losses. Guerrero has won 3 straight, which is why he’s the slight favorite over Ortiz. Not only that, but Ortiz hasn’t fought since 2018. The chalk takes this.

Posted: Friday, August 20, 2021 2:42, EDT
Ageless Manny Pacquaio steps into the ring to take on Yordenis Ugas in the lone championship fight happening on Saturday night. But even though belts aren’t on the line in this weekend’s bouts, the boxing action should be terrific. Check out Boxing odds, analysis, and a free boxing pick for seven of this Saturday’s top matches. Boxing Events on MyBookie: … click title for full article.

Posted: Thursday, July 18, 2019 10:57, EDT
Manny Pacquiao hopes to rediscover his past glory when he enters the ring to face undefeated Keith Thurman at the MGM Grand Garden on Saturday, July 20. Pac shows up the slight favorite to beat the younger Thurman. Will Pacquiao reward his backers? Or, will Thurman take the victory? Check out the Pacquiao vs Thurman odds, analysis, and a free pick! … click title for full article.

Posted: Monday, July 15, 2019 10:13, EDT
Okay boxing lovers and betting faithful, with a pair of championship title bouts on the line this week, you’re going to have two fun-filled chances to cash in with potentially winning wagers! Better yet, you’re going to be treated to what promises to be an absolutely thrilling showdown when one future Hall of Famer looks to hand his undefeated world … click title for full article.

Posted: Monday, January 14, 2019 4:15, EST
In the world of boxing, the end tends to come quickly for former champions, as there is always a younger, hungrier fighter waiting in the wings to take down the champ. There are some fighters who are able to hang on for a few years after their best efforts are behind them, mostly because they can still sell PPV tickets … click title for full article.

Posted: Friday, April 8, 2016 11:51, EDT
Widely-popular 37-year-old boxer Manny Pacquiao is entering what is likely the final fight of his now, legendary 20-year career. 32-year-old Timothy Bradley is looking to extract some revenge and cement his own legacy when the two square off in what will be the third matchup between the longtime rivals on Saturday, April 9, live from the MGM Grand Garden in … click title for full article.

Posted: Thursday, April 7, 2016 7:47, EDT
In what is billed to be Manny Pacquiao’s last professional fight, the Philippine boxer and national icon will take on Timothy Bradley III on April 9th at the MGM Grand Arena for a chance to win the WBO International Welterweight title. This will be the third bout between the two fighters after their first two clashes saw Pacquiao and Bradley … click title for full article.
View Full Boxing 2020 Archive