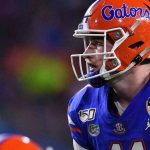 One of the best annual events in college football is the World’s Largest Outdoor Cocktail party from Jacksonville, Fla., otherwise known as the Georgia-Florida game. They meet on Saturday with the top-ranked Dawgs as solid favorites on the NCAAF odds. How to Bet Georgia at Florida NCAA Football Odds & TV Info When: Saturday, 3:30 PM ET Where: TIAA Bank Stadium, Jacksonville, Fla.

College football fans don’t have to wait long for betting opportunities this week as the Mid-American Conference has three games on Tuesday. The best of those appears to be Miami of Ohio at Buffalo as both are contenders in the East Division.

The teams played last regular season and Buffalo lost 34-20 at Miami. Jaylon Bester ran for 107 yards and a touchdown and Miami scored 31 straight points. Quarterback Brett Gabbert started the comeback with a 1-yard plunge that cut the RedHawks’ deficit to 14-10. Bester capped scoring for Miami with a 4-yard run that made it 34-14 late in the third quarter. Buffalo piled up 309 yards on the ground but threw for just 89 yards. Jaret Patterson rushed for 185 yards on 22 carries, including an 82-yard scoring run and Kevin Marks had 101 yards on 17 carries and a touchdown. However, Matt Myers, who opened the scoring with a touchdown pass, was just 4 of 16 with two interceptions and lost a fumble.

Why Bet on Miami of Ohio? | 2020 NCAAF Expert Analysis

The RedHawks opened their season last week with a 38-31 win over Ball State. The win, which gave Miami the Red Bird Trophy, was also the 300th MAC win in team history.

The second half proved to be pivotal for the RedHawks with four touchdowns for 28 points to erase a 21-10 deficit to the Cardinals. Miami finished with 422 total yards in the victory. AJ Mayer finished the contest 16-of-24 for 211 yards with three touchdowns, including two passes to redshirt freshman Jack Coldiron. After an injury to Brett Gabbert in the second quarter, Mayer came in for the rest of the game at quarterback. Mayer’s appearance marked his fourth career appearance in a game for the redshirt sophomore.

Mayer was named MAC East Offensive Player of the Week and Ryan McWood the East Defensive Player of the Week. McWood came up with his first career interception at the perfect time. With the Cardinals driving for a winning score, McWood intercepted a pass and returned it to the Ball State six-yard line. Three plays later, the RedHawks scored the game-winning touchdown with 10 seconds to play in the contest. McWood finished the game with a career-high 14 tackles as well.

Although Miami was 4-26 in Coach Chuck Martin’s first 30 Mid-American Conference games, the RedHawks are 24-8 in the last 32 games versus schools from the MAC, the best record in the conference during that span. Miami was 5-0 last season in one-score games and has won eight-straight one-score games dating back to the 2018 campaign.

The media around the MAC projected Buffalo to win the conference title this season. UB returns 15 starters to a team that went 8-5 and won its first ever bowl game in 2019 – defeating Charlotte in the Bahamas Bowl.

It was a record-breaking night for running back Jaret Patterson. He finished the game with 137 yards on 20 carries. His second touchdown of the game was the 35th rushing TD of his career, breaking the school record of 34 previously held by James Starks. Antonio Nunn also had a big game for the Bulls, finishing with 102 yards and a touchdown on six receptions. The 49 points scored by the Bulls were the most by a UB team in a MAC road game since joining the conference in 1999.

Posted: Monday, November 9, 2020 5:15, EST
College football fans don’t have to wait long for betting opportunities this week as the Mid-American Conference has three games on Tuesday. The best of those appears to be Miami of Ohio at Buffalo as both are contenders in the East Division. How to Bet Miami of Ohio at Buffalo NCAA Football Odds & TV Info When: Tuesday, 8 PM Read More

Posted: Wednesday, November 4, 2020 10:07, EST
There are three college football games this Friday night and just one from a Power 5 Conference as No. 11 Miami looks to improve its chances of reaching the ACC title game when it visits NC State on national TV. The Canes are solid favorites on the NCAAF odds. How to Bet Miami at NC State NCAA Football Odds & Read More

Posted: Friday, January 3, 2020 3:39, EST
If there is one thing that a lot of college football fans would like to see changes in the coming years, it is the time between the playoff semi-finals and the National Championship Game. Yes, kids have classes to attend to and we like to give players time to rest up and heal those niggling injuries, but it still feels Read More

Posted: Wednesday, December 4, 2019 7:56, EST
The Central Michigan Chippewas will look t cap off their season in style when they take on the Miami-Ohio Redhawks in he 2019 MAC championship on Saturday. With the vast majority of the betting public already backing the favorites in this matchup, let’s find out if Central Michigan can cover the chalk as a touchdown favorite or whether Miami-Ohio is Read More

Posted: Friday, December 23, 2016 8:55, EST
A Mid-American Conference team against an SEC team? Sure would seem to be a mismatch on paper and indeed Mississippi State is a huge NCAA football betting favorite against Miami of Ohio in the Dec. 26 St. Petersburg Bowl from the Tampa Bay area. Miami (OH) vs Mississippi State St. Petersburg Bowl Odds, Pick & TV Info Gettin’ it in Read More

Quartet Of Top SU Picks For NCAAF Week 1 Are Straight With No Chaser!

Posted: Wednesday, August 31, 2016 3:52, EDT
If you like your college football picks like I like my favorite beverage…straight with no chaser – then you’re in luck thanks to the quartet of straight-up Week 1 college football picks that you’re about to get. That’s right mybookie college football spreads faithful, you’re going to have a great opportunity to strike pay dirt an insane six times in Read More

Posted: Monday, August 8, 2016 6:41, EDT
The Iowa Hawkeyes will look to kick off their 2016 season in style when they host the Miami-Ohio RedHawks in a Week 1 mismatch whose SU outcome is pretty much etched in stone. Now, whether the Hawkeyes can cover the college football betting lines as whopping four-touchdown home favorites is what collegiate gridiron gamblers everywhere need to know. Let’s find out Read More

Posted: Friday, October 9, 2015 6:46, EDT
The battle of the bricks is once again here with us, but this time round, the game seem one-sided (at least on paper) as the red-hot Ohio Bobcats (4-1) take on the lukewarm Miami Redhawks (1-4) in a Saturday night College Football Odds thriller. The Redhawks are coming into this game desperate for a win as they try to answer the Read More